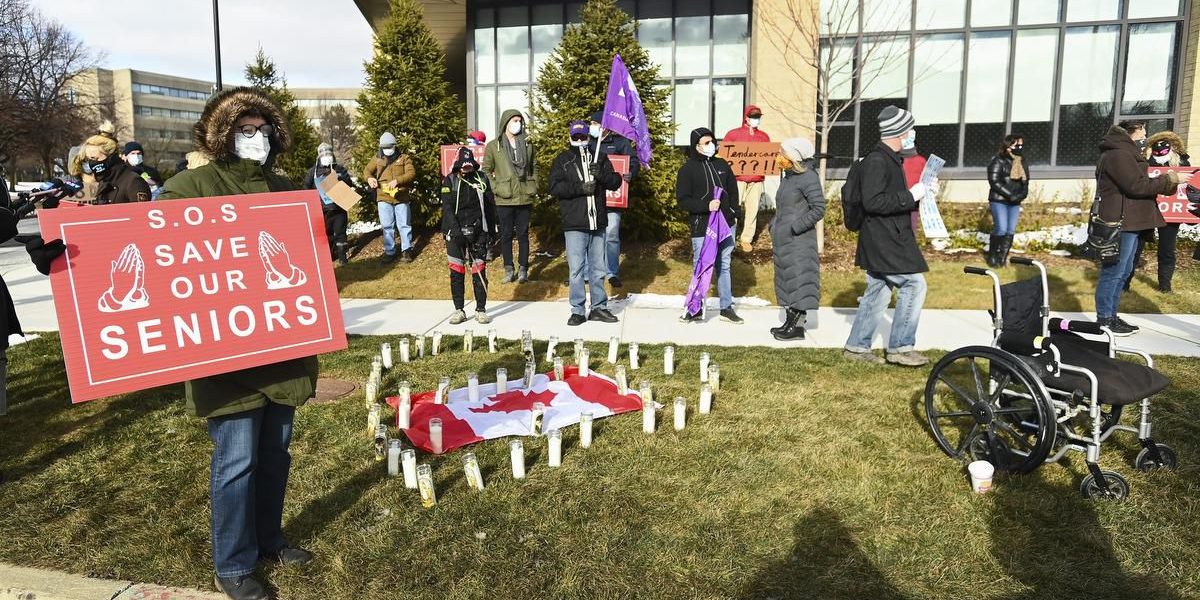 4,000 people have died in Ontario’s long-term care homes during the pandemic so far, often in conditions so deplorable that the Canadian Armed Forces suggested that residents were dying at higher rates of dehydration and malnutrition than of COVID-19. As residents were relegated to rooms covered in feces, surrounded by days-worth of dirty food trays, their calls for help often went unanswered as staff were too overworked and understaffed to respond.

Despite for-profit long-term care homes being the most lethal place to reside during the pandemic, Ford is gifting more than half of the planned 30,000 long-term care beds to negligent for-profit operators. We need to take the profits out of long-term care and hold operators accountable for the thousands of preventable deaths occurring in their facilities.

When asked why Ford’s government was seemingly rewarding for-profit providers despite their poor track record during the pandemic, Minister of Long-Term Care, Rod Phillips argued that revoking licenses from for-profit homes wasn’t practical because “we would rather spend billions of dollars on building new homes.” Instead of barring bad actors from accessing public funds, Phillips suggested that Bill 37, the so-called Providing More Care, Protecting Seniors, and Building More Beds Act, 2021, will ensure the sector is better regulated through stronger enforcement and the doubling of fines.

The truth is that the government never needed a new long-term care act to impose fines on or revoke operating licenses from bad-behaving operators. Such powers were always available to the government under legislation tabled by the Liberals in 2017, which the Conservative government neglected to make into law. Yet despite always having had the power to do so, the Ford government failed to act against even one long-term care operator in the past three years, suggesting that the new act will continue to be toothless if it’s never enforced.

When the first wave was decimating long-term care homes, Ford promised an “iron ring of protection around our long-term care residents and the heroic frontline staff who care for them.” But instead of protecting the lives of residents and workers, he has protected profits. Ford has gone out of his way to protect for-profit operators from liability by passing Bill 218, which shields long-term care operators, among other businesses, from being sued during the pandemic for negligence. Supposedly intended to protect anyone who is making an “honest effort” to follow public health guidelines from liability in civil court, the act exacerbates the disadvantage families already face when trying to prove that multi-million-dollar long-term care companies, who have access to the best legal teams that money can buy, demonstrated gross negligence that contributed to the death of a resident in long-term care.

What is perhaps most baffling is that a person is far more likely to face criminal charges and jail time for failing to provide the necessities of life to another person than is a corporation likely to face a slap on the wrist for failing to provide these same conditions to hundreds of people. Individual personal support workers and nurses have been prosecuted in criminal court, in contravention of section 215 of the Canadian criminal code, for neglect or abuse of their charges. Yet, corporate long-term care homes can commit the same crimes with impunity, all while demanding residents live in over-crowded rooms with overworked and underpaid staff. Unlike in the United States, Canada doesn’t even have a history of prosecuting long-term care home superintendents or directors for negligence, suggesting that the government is willing to ignore bad management practices if it’s done to turn a profit or save the province money.

Irrespective of our ability to hold for-profit long-term care homes accountable for negligence, it’s important to underscore that these homes cannot be reformed to better serve the public because their allegiance will always be to shareholders, not residents. As long as some operators are allowed to turn a profit, residents and workers will continue to be treated like collateral damage for private equity firms who want access to government-provided start-up capital and subsidies, all while applying lean management style techniques that are hardly suited to a factory floor, much less the care of severely health challenged residents. Indeed, the precarious health in long-term care homes is a reflection of precarious work.

After the first wave Dr. Theresa Tam, Canada’s Chief Public Health Officer, summarized the conditions that led to outbreaks in long-term care homes: “limited support for infection prevention and control measures, including a short supply of personal protective equipment (PPE) for healthcare workers, increased the frequency of reciprocal viral transmission between caregivers and patients. Accordingly, over 10% of national COVID-19 cases were long-term care workers. Many healthcare workers were initially employed in multiple facilities, potentially contributing to the spread of the virus. Other factors which were identified as contributing to the spread of COVID-19 were overcrowding in some LTC facilities, old infrastructure with poor ventilation, and chronic understaffing.” All of these are a reflection of profit-driven precarious work, which undermines the health of long-term care workers and the residents they care for. As. Dr. Tam noted, “workers in precarious employment…are less likely to have important employment and economic protections, particularly among those who are low-income…These disadvantages include economic and employment insecurity, a lack of paid sick leave, and the need to work multiple jobs to make ends meet. For example, these factors were identified as consequential for personal support workers in long-term care homes.”

Her report also noted the ageism and ableism that led to neglecting long-term care residents, and the racialized and female workers who are disproportionately denied decent work and paid sick days. She called for safe and supportive long-term care, with minimum staffing levels and “full-time quality jobs with benefits such as paid sick leave.” But these corporate chains have learned no lessons from the pandemic, even as the media blasts them for killing the generation that brought us public healthcare, while sobering statistics continue to tally the daily fatalities occurring within these homes. When for-profit homes were given the opportunity to invest $138.5 million in federal pandemic-related subsidies into maintaining and improving residents’ standard of care, corporate chains Sienna Senior Living, Chartwell Retirement Residences, and Extendicare preferred to redistribute almost $171 million back to their shareholders.

Even now, for-profit operators are ravenous to re-establish quarterly returns for shareholders as profits were partially stymied during the pandemic as the government temporarily restricted residents from being placed in 3 and 4-bed rooms to reduce the risk of infection transmission. This was a problem of for-profit operators’ own making, after decades of refusing to update their facilities to reduce the use of multi-person rooms despite funding from the government to do so. According to the ever-present profit motive, why invest in infrastructure to improve resident and worker wellbeing when you can still make a hefty profit using aging facilities because residents have no other option?

This is not to solely blame provincial governments for shielding for-profits from culpability while continuing to hand over tax pay dollars to subsidize their business costs. In the absence of federal oversight and direct provincial management, long-term care will continue to be a piecemeal mixture of provincial systems that incorporate public care alongside low-quality private options. Rather than leaving long-term care up to provincial jurisdiction, the federal government could and should intervene in the provision of long-term care. This could easily be done by attaching much-needed strings to more necessary federal funding. The relatively modest $1 billion ‘Safe Long-Term Care Fund’ requires that provinces use funding for improvements to ventilation, hiring more staff, and increasing wages–representing an initial federal foray into what should be a more substantive and transformative intervention into the sector.

More transformative federal intervention would also require that long-term care be protected by the Canada Health Act as a universally insured health service, much like hospital services are. The federal government could then establish core standards around how money is used by the provinces, creating mandatory staffing and care requirements, limiting funding to public operators, while ideally transitioning all for-profit and non-profit homes to come under public ownership and management.

That is not to idealize the function of the Canada Health Act, whose power to uphold standards of care have been progressively decimated under decades of neoliberalism, resulting in cuts to federal transfers, lax enforcement, and the outsourcing of certain services to for-profit companies within the healthcare sector. Improved federal oversight into long-term care will only happen when neoliberal dogma is thoroughly rejected, and the state begins to fund health services more generously. If this happens, it will not be an act of Trudeauian benevolence but the result of a militant and united working-class movement that forces the state’s hand to provide the free high-quality and compassionate care–rooted in decent work–which every person deserves in the later years of life.