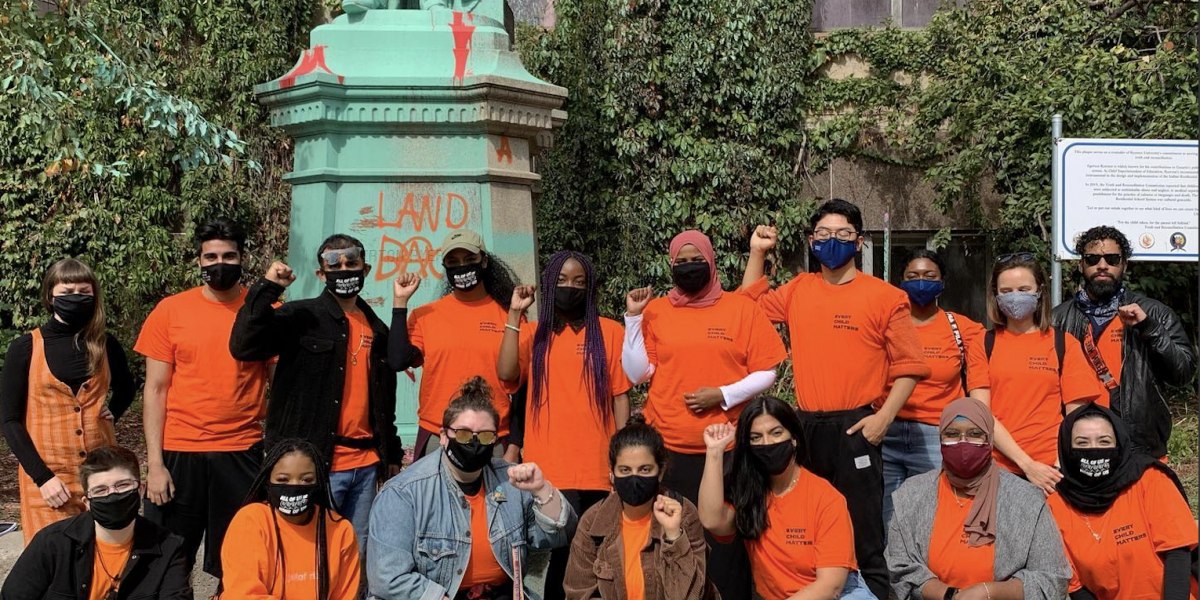 Last Wednesday the All Out September 30 strike, a student-led strike against racism, was held in order to “hold our administrations and provincial government accountable for their complicity and active perpetuation of anti-Black and anti-Indigenous racism on our campuses and amongst our society”.

Led by Black and Indigenous activists based in the Greater Toronto Area, the strike aimed to seize the momentum of the upsurge against racism that occurred across North America this past summer. The event took place online due to COVID-19 concerns and attended by hundreds nationally.

The Truth and Reconciliation Commission of Canada in June 2015 described the residential schools as a “central element of… policy which can be best described as ‘cultural genocide’”. The orange shirt is the symbol of this holiday as its founder Phyllis Webstad remembers having an orange shirt given to her by her grandmother seized when she first attended the St. Joseph Mission Residential School in British Columbia in the 1970s. The Liberals have recently introduced legislation to establish Orange Shirt Day as National Day for Truth and Reconciliation for federally regulated workers.

Kelly Brownbill, of the Mi’kmaq Nation in Newfoundland, delivered a comprehensive Orange Shirt Day teach-in on Indigenous values, especially pertaining to community and relationships. In seizing Indigenous children from their families and communities through the residential school system, during the Sixties Scoop, and through policies of forced assimilation, Indigenous communities experienced traumatic ruptures from their heritage and cope with its legacy to this day.

Indigenous cultural teachings were explained and were accompanied by a sobering assessment of the trauma inflicted by the settler colonial state. Brownbill’s presentation ended on an uplifting and inspirational note, with a celebratory recognition that in her own lifetime she has witnessed a flourishing of Indigenous cultural awareness and political activity that gives her daughter and her associates greater resources to work with in the fight for justice than her generation had had and a “call to action,” calling out to the audience to recognize that the struggle for Indigenous sovereignty and against racism is “[theirs] to pick up… not be ashamed of, not to be blamed for, but to do better with.”

Barriers to education, and representation in the classroom

After the Orange Shirt Day teach-in the strike held fruitful discussion on the myriad of pressures facing Black and Indigenous students in higher education. Seizing the momentum of the uprising against anti-Blackness and anti-Indigeneity in North America centering on policing, student organizers discussed abolitionist politics and their applications in campus spaces.

Noting that Black and Indigenous students already face barriers to higher education due to systemic discrimination in public schooling, foster care systems, and higher poverty rates, campus policing was said to further exacerbate the sense of exclusion that many Black and Indigenous students experience. Speakers called upon the audience to “imagine otherwise possibilities” where they enjoy support for their “thriving rather than surviving” and do not face the risk of criminalization. Throughout the presentation the link between anti-Indigeneity and anti-Blackness was emphasized, including striking for the removal of a statue of the educator Egerton Ryerson for whom Ryerson University is named, widely recognized as a key architect of the residential school system. Such a demand was inspired by the wave of statue topplings that occurred this past summer with the protests ignited by anger over the murder of George Floyd in Minneapolis.

An organizer raised the risk of liberal cooptation of the Black Lives Matter/defund-the-police movement and optical allyship, voicing concern that support for the burgeoning racial justice movement risks becoming performative as opposed to being grounded in concrete action that will result in meaningful changes. The strike also explicitly connected the strike with labour activism. Rajean Hoilett, an organizer with the Toronto Prisoners’ Rights Project, discussed the possibility of labour power as a tool to give heft to the demands of the strikers; university faculty possess bargaining power and in many places of higher learning they are unionized employees.

One of the key demands of the strike was for decent work and decent pay for the staff at universities and colleges, including for “food service workers, cleaners and custodians, groundskeepers, maintenance workers, and security”, jobs often held by racialized workers and are characterized by a lack of unionization, precarity, part-time hours, low wages, and few-to-no benefits. Many Black and Indigenous students in higher education work through the schoolyear in these types of positions in order to pay for their schooling and living expenses, a fact linked to other demands of the strike made with an eye towards making education more inclusive for students from poorer backgrounds, including lowered tuition fees and more services, programs, and supports for Black and Indigenous students, including scholarships and grants.

Though the strike’s origins lay in abolitionist organizing in the age of Black Lives Matter, the strike interwove demands to address anti-Black racism with that anti-Indigeneity and labour activism, recognizing that in the struggle for a better world fights are strengthened when common ground is found and they are linked.

The demands of the #AllOutSep30 strike

To learn more about the demands of #AllOutSep30 strike, visit their website. Information on Orange Shirt Day, including resources to celebrate it locally, can be found here.