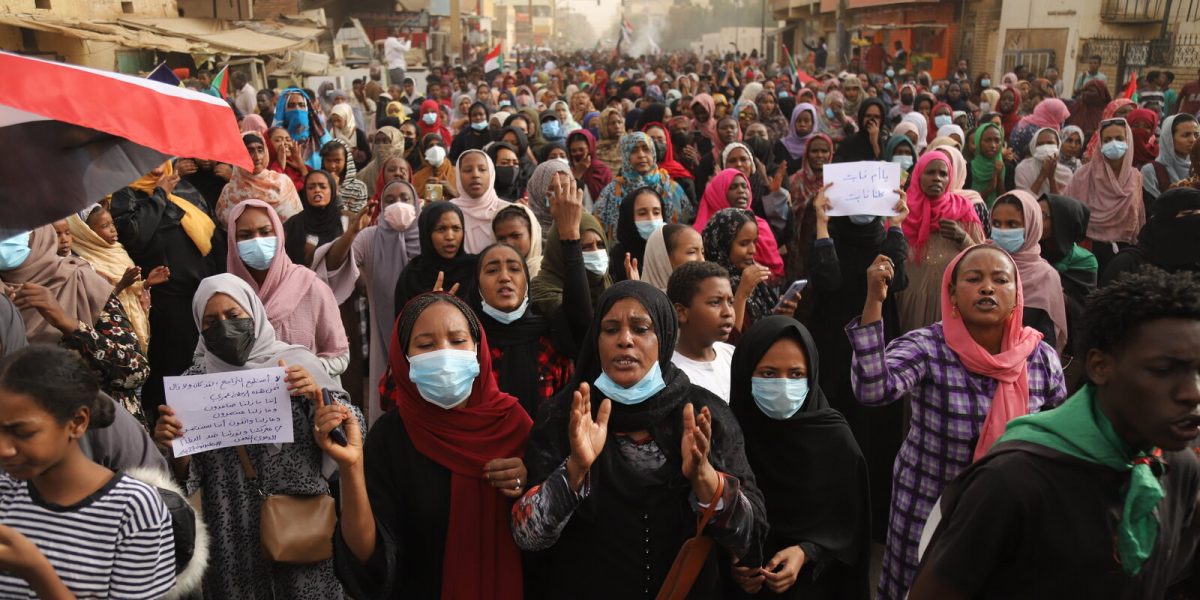 The Sudanese military seized control of the country through its coup on October 25, 2021. Ever since, there have been weekly mass opposition demonstrations in spite of deadly state repression. Local Resistance Committees work with unions and demand-based organizations around the “3 No’s” regarding the military- – No negotiations, no partnerships and no legitimacy. Instead the resistance is putting its preferred alternatives into writing, by drafting Declarations and Charters. Spring Magazine spoke with Khartoum-based activist Muzan Alneel about this important process, so we can continue to learn from the Sudanese resistance.

Why are these new Charters and Declarations so important?

The charter is one of the top issues being discussed by people, by those directly involved in resistance. Over the past month, Resistance Committees (RCs) and other popular organizations held discussions and agreed the Forces for Freedom and Change (FFC)s Declaration is over with and we need a new political charter and declaration. This will help us clarify our objectives.

All the Declarations or Charters that have been shared so far are seen as proposals for discussion by the public and by other organizations. They are not considered to be in final form.

Do you see any variations among the Declarations prepared in different cities/regions?

Yes. Work started in different levels and in different cities. One of the first was called a “roadmap” prepared by the RC in Mairno (city). It deals with how to build a governance structure starting with local councils then up to municipal, state, and to national levels; for example they would like to see governance by a national assembly whose members are selected from the bottom up.

Meanwhile in January, 2022 the Charter developed by the Madani (city) RC featured the same governance structure as Meirno’s, but is more detailed in its political vision and in its analysis of the root problems in Sudan, starting with economics. The country’s economic structure was created by colonial governments and now post-colonial ruling bodies strengthen these economic structures, which are based on poverty for the masses and wealth at the top. These structures also strengthen the relationship between rulers and rural areas. We see this analysis reflected in Madani’s solutions in their Charter e.g. rights for minorities and women.

Within a few weeks of publication, this Charter was signed by more than 20 bodies in different states.

We then saw a proposal by Medini(city) signed by 22 RCs for a new charter (slightly revised from the Madani and Meirno documents) with regulations to ensure all signatories are committed to achieving the Charter’s objectives.

During this time in January and February we knew the Khartoum RCs were working on their proposal, but we knew it would take a long time because 25% of the country’s population is in the capital and there are over 800 RCs!. The draft was put out to the public February 28 for feedback and can be read here.

What did the Charter development process look like and what have been the challenges?

The biggest challenge has been “exploring the new”, because this is a new concept. People mostly had to create as they went along.

In Khartoum, the process took three rounds of deliberations. The RCs created the bottom up structure. Proposals went from neighbourhood RCs, to coordinating bodies in small areas, then to the overseeing city coordinating body between the three cities that form Khartoum. It took three rounds overall and each set of changes was based on the needs expressed by the people. For example, there was a desire for collecting a larger sample of opinions, therefore the RCs did a survey to take in a broader neighbourhood.

For the longest time we’ve been saying the geographic nature of RCs has its limits. We saw this in Khartoum, with the focus on consensus-building even though a political vision is not yet available. This focus on consensus, rather than actual principles, meant trying to have a large “umbrella” and trying not to get into conflict. This left lots of options open and vague, an unclear economic vision, and some not very revolutionary choices for government structures.

Also, any terms that are not neoliberal get criticized as “communist”, though this accusation is fading with time. It’s a bit amusing though because Sudan’s Communist Party is very reformist and will go for alliances with neoliberals.

What has helped the process and what lessons have been learned?

I think one thing that helped was being able to use some foundations for what they saw in the old FFC Charter and other processes used during the 2020/21 transitional period, for example the decision-making processes used by RCs.

Another help has been seeing the other Declarations or Charters from other cities, which are more principled, sharing these with the public, helping people to analyze and see there are alternatives and we can evaluate among the alternatives. For example the Khartoum proposal for the governance structure starts with the selection of prime minister. But now people are saying “that doesn’t sound like power of the people”, instead we should start with electing local councils.

An important lesson was when organizers got to the point of problems or conflicting positions, they opened spaces for people to write critiques on specific issues. Then came a point when written responses would be reviewed. The process varied somewhat by neighbourhood size, the reach of the RC, and the safety of the area, so the process was very contextualized in the local area.

From the point of view of those observing, there seemed to be a commitment by the organizers to advance inclusivity as much as possible. Their perspective on organizing was to get involved with society and then propose something that fits society’s reality, not create something from a book. I’m not an RC member, but those who are in RCs say they think the process of writing was more of a learning and an output than the final document itself. The techniques for discussion and review are the most important.

What are the next steps?

There has been recent discussion about next steps, but there is no schedule for when the Charters will be finalized.

There is more talk now on how to come together as coordinating bodies in and from different states. Reflecting on the Madani proposal means we should start working on local councils now and not wait for the national military to be overthrown.

Unfortunately, Khartoum’s current proposal is not suggesting a similar approach but this might change with discussions. But once local bodies are created they will draw from the concept of “dual power.” We still see a lot of RCs and other opposition forces seeing resistance as a means of pressuring those in power, not as a means of taking power. This is the most important change of mind set that we need to achieve.

What are some external factors affecting international solidarity?

Sudan is not in the news, and the way the media defines who is the resistance and who is the enemy is not correct. Even right after the October 2021 coup, the media tried to simplify what was going on and only covered protests organized by the FFC, not the RCs. They only started doing so six to eight weeks after the coup.

This is not a story that can be told in a simple way. Descriptions have to involve who is the enemy, not just army vs. civilians, but the military controls the whole economy. But the mainstream  media is used to a simple story. Our story is not a crowd-pleaser.

Within Sudan, nuances became part of the chants e.g. “All the power to the people and the army to the barricades.” This refers to power and wealth distribution. People manage to find a way to express their demands simply, even if the media cannot.

What are some important international solidarity actions needed from outside Sudan?

This solidarity impacts us and helped us last time, both the level and timing of international solidarity. But, compared to the December revolution and 2020, the world is experiencing different factors, e.g. COVID, the invasion of Ukraine, etc.

What should be done outside Sudan? It’s not just that governments need to stop supporting the Sudanese military. The first “dialogue” process of the UN Mission in Sudan tried to say we should accept Hamdok coming back and build from that. Now the UN report is out. The UN doesn’t know how not to say “negotiations”. That word was rejected, as seen in the demands in the street. EU ambassadors and other western representatives are discussing the UN report but it has zero impact on people on the streets, there is no interest by the people.

Many governments support the UN position, so I tell comrades to try and figure out what their country’s ambassador is doing in Sudan. For example some governments are funding workshops in Sudan supposedly to increase our capacity for resistance, but this is a shameless process of co-opting the resistance. Where are governments sending money to Sudan, for these workshops or whatever? Publicly exposing such information will be useful, so we know what’s going on, even if we can’t stop the funding. For now we only know money is coming into these “dialogues” but we don’t know from where and we don’t have the time or priority to find this out. So figuring this out by comrades in other countries would be a big help.