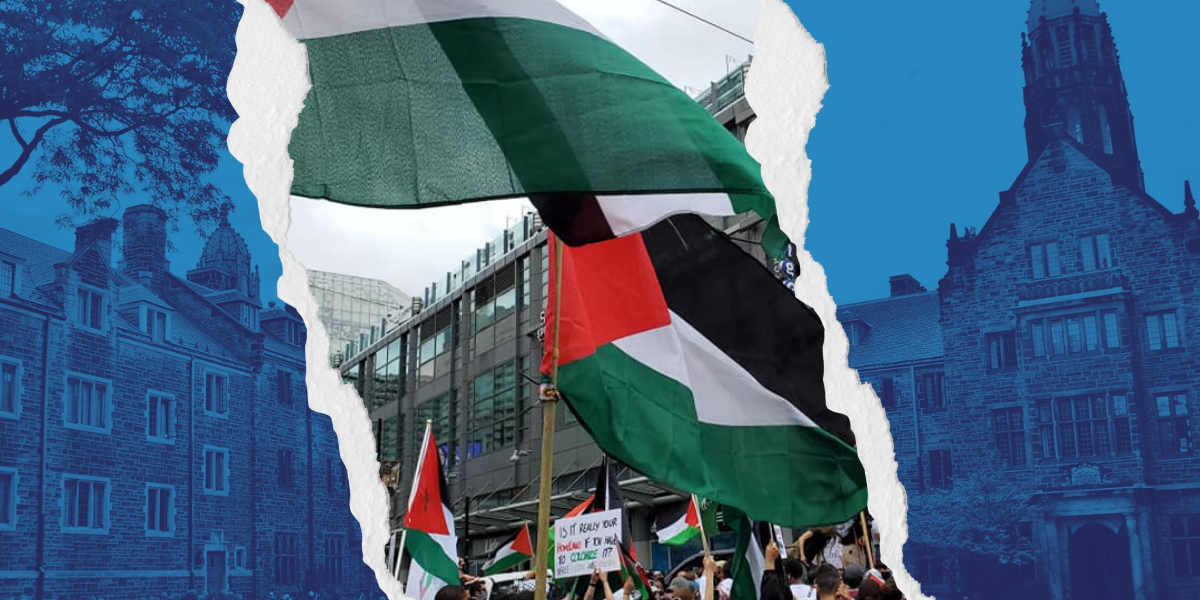 Late in the evening on Wednesday, February 16, members of the University of Toronto Students’ Union (UTSU) made history by passing a major divestment resolution, another win for the global BDS (Boycott Divestment Sanctions) movement in solidarity with Palestine. UTSU is the second-largest student union in Canada and the third-largest in North America. The successful vote is a sign of the growing confidence of BDS activists on Canadian campuses and of a groundswell of support for Palestine among students in general.

Wednesday’s resolution was debated at a Special General Meeting (SGM) of the student union, which was called to deal with outstanding items from a previous meeting. The resolution demanded that “UTSU wholly divest funds & further on forbid investment to firms complicit in the occupation of Palestinian Territory” (see agenda here). While similar calls for divestment have been taken up on other campuses, this one caused a stir because it brought Palestine solidarity back to the centre of student union politics.

For many years, the St. George campus of the University of Toronto has been a hotly contested terrain on the issue of Palestine: numerous struggles have taken place between grassroots, progressive, or left-wing forces and reactionary, pro-Israel, or right-wing forces (many of them off-campus) among both students and faculty. In the mid-2000s, in the wake of the 2005 launch of the BDS movement, the St. George campus was a significant sphere of influence for Palestine solidarity organizing, both in Canada and internationally. Israeli Apartheid Week (IAW)–a week-long series of talks, workshops, and educationals about the Apartheid nature of the Israeli state and how to campaign against it–was first organized at the University of Toronto. Its success over the years had a domino effect that made it an annual event at campuses all over the world.

Its success also provoked the outrage of the university administration, the pro-Israel lobby, and some donors, all of which have attempted at various times to shut down IAW and label all Palestine solidarity initiatives as “anti-Semitic.” In the last year, administrators were exposed for their role in privately intervening to reverse the decision of the university’s law school to hire Dr. Valentina Azarova, an internationally renowned human rights legal scholar. The move sparked a global outcry in defence of academic freedom and a boycott campaign led by the Canadian Association of University Teachers (CAUT), which ended in defeat for the university.

This is the context in which the UTSU resolution was debated. When the SGM was called, it ignited an organic student mobilization in favour of the resolution, which was fuelled by the work of the campus-based Muslim Students’ Association (MSA), Students for Palestinian Human Rights (SPHR), the Association of Palestinian Students, and The Palestine Forum. Similarly, Zionist student groups and other pro-Israel organizations attempted to fill the meeting with opponents. But they were outnumbered from the start.

From the onset of the meeting, which began around 5:00 p.m. on Wednesday, hundreds of students and spectators had assembled, participating by Zoom. When it came time to approve the agenda, there were countless attempts to strike out the divestment resolution. But the pro-Palestine students stood their ground and kept it on the agenda. This first success, early in the meeting, signalled that the majority of participants were already on side, and led opponents to do everything they could to disrupt, derail, or delay the meeting. These tactics took up nearly three hours of the meeting and even forced a recess in response to the chaos.

When the divestment resolution finally came up on the agenda, nearly four hours later, the pro-Israel students tried to force a vote to adjourn the meeting, arguing that too much time had passed. Another hour would pass before the vote finally took place. And when it did, there was no time to debate it. The meeting moved directly to the vote.

The chair of the meeting then asked all those in favour to raise their hands. The count took a long time because hundreds of people were on the Zoom call. Then the process had to be repeated for those voting in opposition. And then each vote had to be confirmed.

The process was nerve-racking. Texts were flying among organizers and supporters as they breathlessly awaited the final tally of the votes.

In the end, it wasn’t even close. The resolution passed 299 to 243. The healthy margin speaks volumes about the rising tide for Palestine among students.

Moments after the count was announced, students began to describe the vote in social media posts as “historic,” and it is no exaggeration to say so. It fittingly describes a victory that has been long overdue, but also a long time coming, and in one of the most contested terrains in the student movement.

Here’s hoping for many more to come!