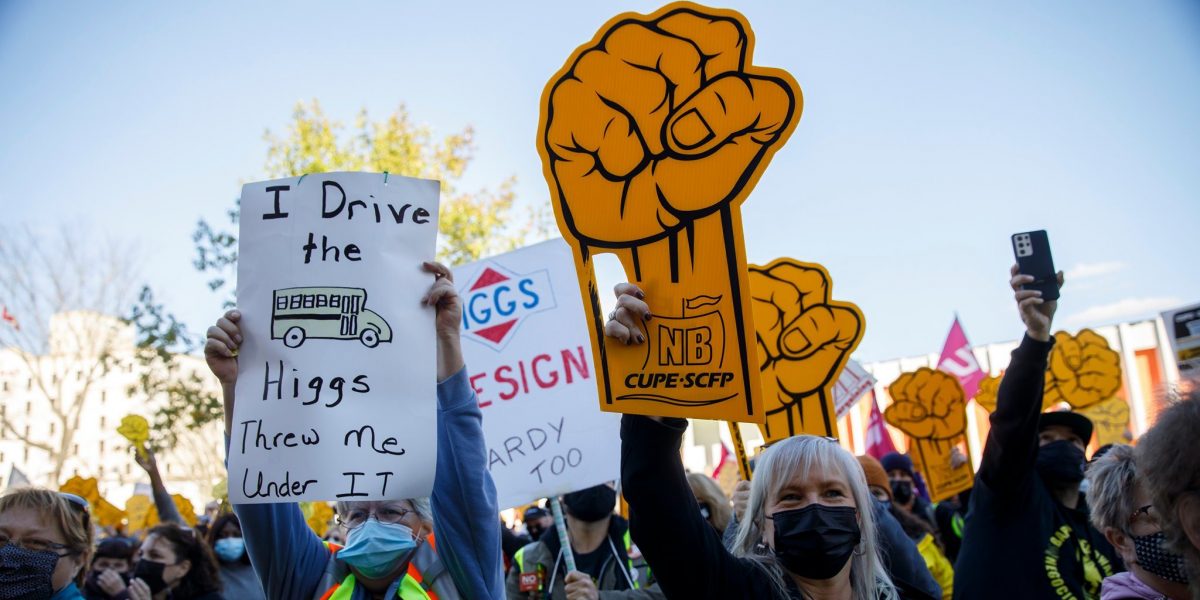 As of Monday over 22,000 CUPE NB workers are back at work. After being on strike for over two weeks the workers are in the midst of voting on an agreement for wage demands and pension plans. Forcing Higgs into this deal is no small win for workers.

A bargaining team from CUPE NB met Sunday to discuss next steps with the Higgs government and the ratification process. The plan is to have all locals vote on agreements with the government about wages and pensions by the end of the week.

Steve Drost, the president of CUPE NB, stated on Monday, “What is in today’s tentative agreement has only been possible through collective action, perseverance, and determination of all union members.”

The details of the agreement reached will not be released until members can see it first during ratification votes later this week. Ratification votes seem likely given the endorsement by the union leadership. We can expect that pensions will no longer be on the chopping block and that wages increases will be above what was on offer from Higgs.

Organizing gets the goods

This win was due the workers’ determination and persistent pushing for equitable and fair treatment from a Conservative government that has repeatedly attacked and devalued their labour.

This was the product of long-term organizing by workers who were tired of low-wages and attacks on the public sector. The high levels of participation and militancy on display by CUPE members in New Brunswick was no accident, it was the culmination of thousands of conversations, meetings, and actions over the last number of years. The workers were organized, prepared and committed to fight to take on Higgs over the issue of wages.

When the strike commenced the length and energy of the picket lines must have come to a shock to Higgs and the Conservatives. The thousands of strikers in New Brunswickers stretched along main streets and shopping mall entry points across the province. And instead of losing steam the strike seemingly grew in confidence as they forced the Higgs’ government onto the defensive.

The strikers won overwhelming  public support for their demands. New Brunswick Polling 2021 released a Public Service Workers Strike Poll that showed Higgs unfavorability ratings grew to 67% amongst NB voters (versus only 23% favourability). Support for the provincial Conservative party dropped to 21%, down 18 points from the last election. Polls also showed that over 80% of New Brunswickers supported CUPE’s demands for wage increases above the cost of living.

It was no small feat for striking public sector workers to win support for wage increases while the government relentlessly attacked them for cutting off services. The workers faced down and defeated a government that last year was intent on a public sector wage freeze and an attack on pensions. This is a lesson that when workers organize, they can fight and win even against a hardened Conservative government.