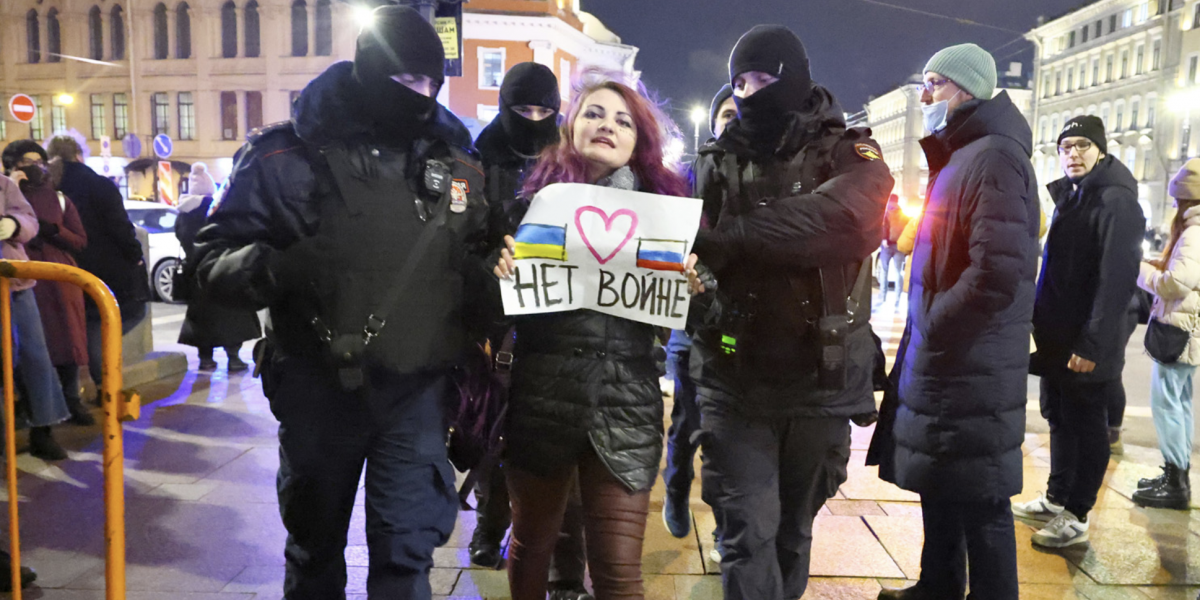 Russia violated Ukraine’s sovereignty by engaging in an outright invasion of Ukraine. This naked aggression should be roundly denounced. NATO countries have responded by assembling troops along the borders of neighbouring states, sending more arms and increasing sanctions. Who is to blame, and what is the way out?

The West sees Russia as the aggressor. Humiliated from the collapse of the USSR, the Russian ruling class is looking to retain and strengthen its influence. Or maybe it’s a clash of civilizations—traditionalist Russia trying to subvert Eastern Europe’s integration with the West. Or democracy—authoritarian Russia stopping democratizing Ukraine. But how do things look from Russia’s perspective? When the USSR fell in 1991, the West took advantage: the European Union and NATO expanded to its borders, and now Ukraine is invited to join. This is not to excuse or defend the Russian state, which is capitalist and authoritarian .

The solution is not to side with either Washington or Moscow. Rather, class consciousness must develop, with working class people realizing they will all lose from war. Only when they move beyond ideology and organize for their collective interest will conflict in Ukraine stop.

In 2014 in response to pro-Western protests, Russia annexed Crimea and provided military support to separatists in Donbass. Now Russian troops are invading Ukraine, with devastating consequences for the people of Ukraine.

Russia offered to move its troops if NATO returns to its 1997 membership, which excluded Eastern Europe. Not only has NATO refused this demand, but has also asserted it is up to each state to determine who they ally with—including Ukraine’s right to join NATO. This “consent” is what animates discourse around conflict with Russia. During the Cold War, the Warsaw Pact became proxy states of the Stalinist USSR. Once it fell, these democratic states “freely” went to the West. In contrast, after a brief period of democracy, Russia became an authoritarian state under Putin. Domestically, Russia has shut down NGOs and arrested pro-Western activist Alexei Navalny. Now they are cracking down on antiwar protesters, with thousands arrested. Internationally, Russia invaded Georgia in 2008, Ukraine in 2014, and Syria in 2015.

Isn’t it clear? Russia is a pariah state, unable to accept Western progress and international norms. At least that’s what the West says. From Russia’s perspective it is very different.

The fall of the USSR and the ongoing expansion of NATO

When the USSR collapsed in 1991, the economy declined 40 percent over three years, twice as bad as the Great Depression in America. Rapid privatization led to rampant starvation and poverty, supported by the US. “More than 250,000 Russian entrepreneurs have received U.S. training, consulting services or loans. Today 70 percent of the Russian economy is in private hands” read the White House’s website in 1993. The same year, Russia was on the brink of civil war, when a power struggle emerged between President Boris Yeltsin and Parliament—the latter of which was trying to stop rapid privatization. When dissolving Parliament (without legal authority) failed to end the conflict, Yeltsin (supported by the US) bombed Parliament, killing 187. The next year conflict broke out in Chechnya, killing up to 100,000 civilians.

With the USSR gone, politicians and pundits thought NATO would end. Instead, the West expanded it. First, East Germany joined upon reunification. Russia only allowed this because America promised no further NATO expansion—a promise that was betrayed in 1999 when Czechia, Hungary and Poland joined the alliance. For this reason, Russia is cynical about Western promises in current negotiations. In 2004 NATO reached Russia’s border, with Estonia and Latvia among the seven nations that joined the alliance that year. Under Obama, Albania and Croatia joined, further surrounding Russia’s ally Serbia. Even under Donald Trump, who threatened to exit NATO, two states—Montenegro and North Macedonia—joined the alliance. Russia has rarely been able stop NATO expansion. When George Bush promised to add another neighbouring state, Georgia, to the alliance, Russia supported separatists in the region. When Ukraine started to turn to the West in 2014, Russia again supported separatists and invaded Crimea.

Pre-emptively invading a neighbouring state is illegal under international law, even for self-defence. But the United States has done the same, attacking states that are further away and less of a threat. Apologists would argue that democracy is what separates the West from Russia: Russia invades democratic Ukraine and Georgia while the West overthrows tyrants and spreads democracy, and Russia allies with authoritarian Belarus while democracies freely choose to join NATO. But the West has a history of overthrowing democratically elected governments—most recently in Bolivia in 2019. Outside Europe, allies include repressive states such as Saudi Arabia and Egypt. Even within Europe, the democratic-authoritarian divide is murky. Fascist Portugal was one of the founding members of NATO. Meanwhile, little has been done about Hungary and Poland’s slide towards authoritarianism. And while Belarus is currently allied with Russia, this has not always been the case. When Belarus refused to support Russia’s invasion of Crimea, sanctions were lifted despite no improvement in human rights.

Neither Washington nor Moscow

Thus, the Ukrainian conflict is not about democracy. It’s about inter-imperial rivalry. The West only supports democratic Ukraine because it is allying with them. Russia is attacking the Ukraine to exert influence and to stop another NATO member at its border.

Does this mean we should support Russia against Western aggression? No, there is no justification for this invasion. Russia is an authoritarian capitalist state. Russia busts unions and arrests members of the Communist Party. It targets Indigenous people in Siberia who oppose resource extraction. Ethnic minorities are discriminated against or left vulnerable to fascist thugs.

Instead of supporting one capitalist state over another, we should focus on working class people. The Donbass is the most industrialized region of Ukraine, and thus the most affected by post-USSR privatization. Under IMF economic reforms, manufacturing and mines were closed. For this reason, the Donbass has been antagonistic towards the West. But the region is also the victim of Russia: Russian backed separatists in Donbass have banned communist parties and engage in warlord capitalism. It is working class people, not the rich, who are conscripted into the army and killed as civilians.

It is in solidarity with working class Ukrainians and Russians, not the West or Russia, that war should be opposed. We must move beyond abstractions like “West versus East” and instead focus on economic struggle. We should oppose Western supported initiatives in Ukraine to rollback labour laws and oppose separatists kidnapping union activists and union suppression in Russia. In supporting working class people on both sides of the conflict, workers will realize they have more in common with each other than with the elites in Washington and Moscow.

In Canada, this means challenging the militarism of our own capitalist state. Trudeau announced a deployment of Canadian troops to Latvia, saying that Russia’s behaviour is “a further invasion of a sovereign state and it is absolutely unacceptable.” He was careful to word this as defending a “sovereign state” (in capitalist terms) rather than a “sovereign nation”, because Trudeau has carried out unacceptable invasions of Indigenous nations like Wet’suwet’en. The same Canadian state built on violating Indigenous sovereignty will not bring justice to the people of Ukraine. Canada should take no part in NATO imperialism, and should end its own colonial occupations.