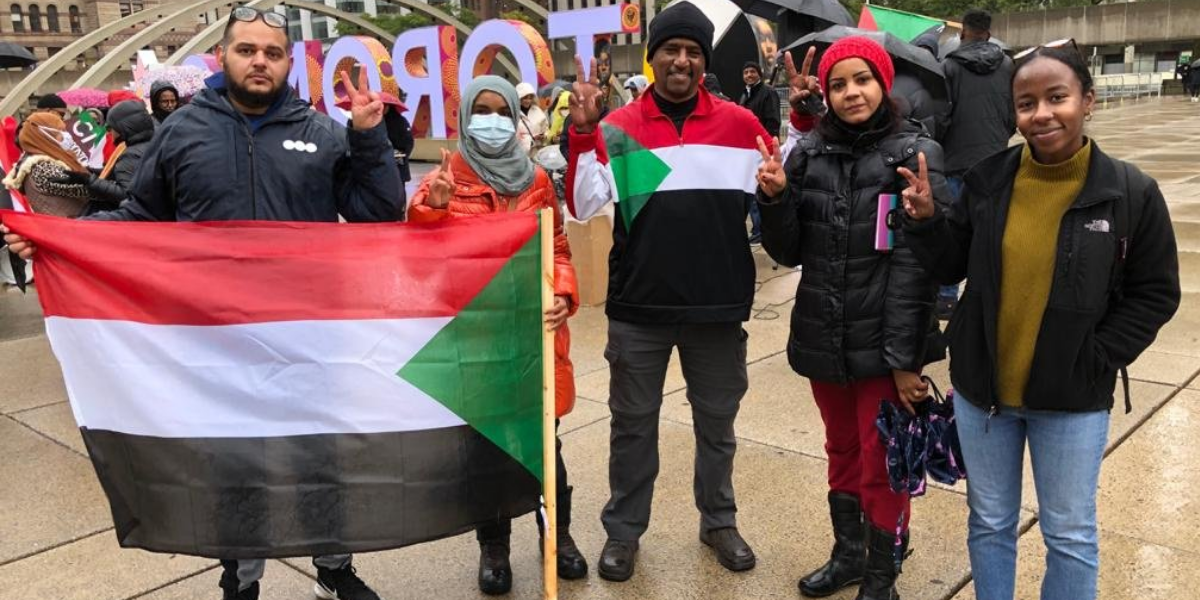 Immediately following the recent military coup in Sudan, an emergency solidarity rally was held in Toronto on October 26. Spring Magazine spoke with one of the young organizers, Leena Badri, who is a Sudanese student at the University of Toronto, a writer, and a political activist who is passionate about global acts of revolution, and challenging modern day imperialism. She is a member of the Sudanese Support Group in Toronto, which has been organizing solidarity events.

Could you tell us why you and other members of the Sudanese diaspora are rallying in Toronto?

We are protesting the military coup in Sudan. There had been a transitional government that was in power following the 2019 revolution. Recently the President of the Sovereignty Council and the Military Commander Abdel Fattah al-Burhan took power in a coup. He dissolved the sovereign council, suspended parts of the constitution, declared a state of emergency and announced he would be setting up a government soon and would have elections in 2023, which is obviously something we don’t believe. So we’re here to demand that he step down and that we have no military rule in Sudan, and only a full civilian government.

What will it take to defeat the military coup?

Firstly people abroad and international governments will need to continue to support Sudanese protesters on the ground. This is a very specific case because the military has guns, power and a lot of money backing them. The Sudanese people don’t have these, they only have their voices and they only have the streets. So they rely a lot on the international diaspora to get the word out, especially as the internet has been cut out. So a lot of people are resisting and peaceful protest is the only means they have.

The people are undertaking civil disobedience for the next three days until October 30, when they’re planning a massive day of protest. We expect there will be some violence used against the protesters in Sudan. So it will really take perseverance in the face of state violence and a lot of time. We are prepared to be in this for the long haul and are dedicated to supporting protesters. We also need immense amounts of support.

What has been the role of the local resistance committees in Sudan?

It’s actually very impressive and astounding. I really believe any kind of organized resistance movement needs to take notes from Sudan because even with the Sudanese internet blackout, in less than 24 hours the resistance committees were able to communicate that there would be civil disobedience for three days. And it was successful. There is hardly any movement on the Khartoum streets. We don’t have a lot of information coming out of states outside Khartoum but the resistance committees are such a crucial part of this revolution. The work they do is so significant. They are the ones who are organizing. They are the ones going to different houses, knocking on doors, passing out papers, going to mosques and making sure the mosques have a call-out for civil disobedience, and announce any important matters. So they are really the ones who are organizing on the ground.

Something else that is not publicized are the strong unions we have in Sudan. Ever since the military coup a number of unions have announced strikes. That includes the pilots’ union, the university teachers unions, and the mining unions. That’s a very strong union culture and it has been the backbone of the revolution as they’ve been able to organize quickly and resist any actions they feel impede the demands of the revolution. Unions in Atbara, “the City of Iron and Fire” have announced a complete strike, with no railway workers working. As for the Port of Sudan, we have trouble getting information outside of Khartoum because of the internet blackout, so we’re not sure. We assume there is heavy state violence being used in all states.

What about parts of the army? Do people think there could be members who break away to support the protesters?

There are unverified reports that the general undertook the coup at this time because he was afraid parts of the military might rebel against him. But the feeling on the streets is that regardless of which military leader is involved, even if they say they support the revolution, the people of Sudan do not want another military government. They are demanding a complete civilian government. Any military faction that  breaks off, or says they support the revolution, still does not represent the Sudanese people because the people have been clear they want a completely civilian government.

It is unlikely that we will see a part of the military break off to truly support the revolution, for example with arms and military expertise. That’s because the military in Sudan has a strong culture and a lot of it is tied to their economic interests. Sudanese military members get housing, members of the military run a lot of businesses, and have a lot of connections. So to assume they will give that up seems very unlikely.

This is different from the military in Tunisia in 2011, which was less focused internally and more focused on external attacks. So they were able to oust the president and stand with protesters and that was well received by the public. But in Sudan, the military culture is different and it is important to consider that when we are looking at different historical cases.

What would you like to see people in Canada do – whether they’re part of the diaspora or not – to support Sudanese people at this important moment?

It’s been great that a coalition of ambassadors has denounced the military government and supported a civilian government, including the Canadian ambassador to Sudan. I would urge people in Canada to get their information from Sudanese people, to follow Sudanese people on the ground through Twitter and Instagram. State-owned media contains a lot of misinformation. Just the other day, they were spewing some sentiments about how this coup was about correcting the path of the revolution and spinning a narrative that there are pro-military demonstrations. I would also urge people to put pressure on the Canadian government to push for a full civilian government.

And it is important to note this is not just an internal Sudanese issue. It is significant internationally. The reason the Sudanese military gets all this financial aid is because they are being supported by Gulf governments, like Egypt, Saudi Arabia and the United Arab Emirates (UAE). These are governments that the Canadian government has billions of dollars of contracts with. Canada says it supports democratic governments so are these governments an exception? Canada should cut ties with these governments that are supporting the military coup, meddling in the affairs of sovereign nations and destabilizing parts of Africa so they can continue to have the kids of the oppressed nations die in their wars, like in Yemen. Military generals are willing to sign contracts to sell Sudanese land and other resources, so Sudanese people can never benefit.

People need to understand that Canada and the western world are complicit in this and it is important that Canadians understand the situation in Sudan is not something that is external to them. This is a moment in time when a transition to a free and democratic government is possible for a nation that has been shackled for over thirty years. When people talk about developing African, this is the time for them to be paying attention. For such people to say they support this movement, they also need to support the resistance on the ground. The amount of mobilization is astounding and it is important to amplify the movement. It concerns everyone, especially those who say they stand for human rights, for justice and dignity.