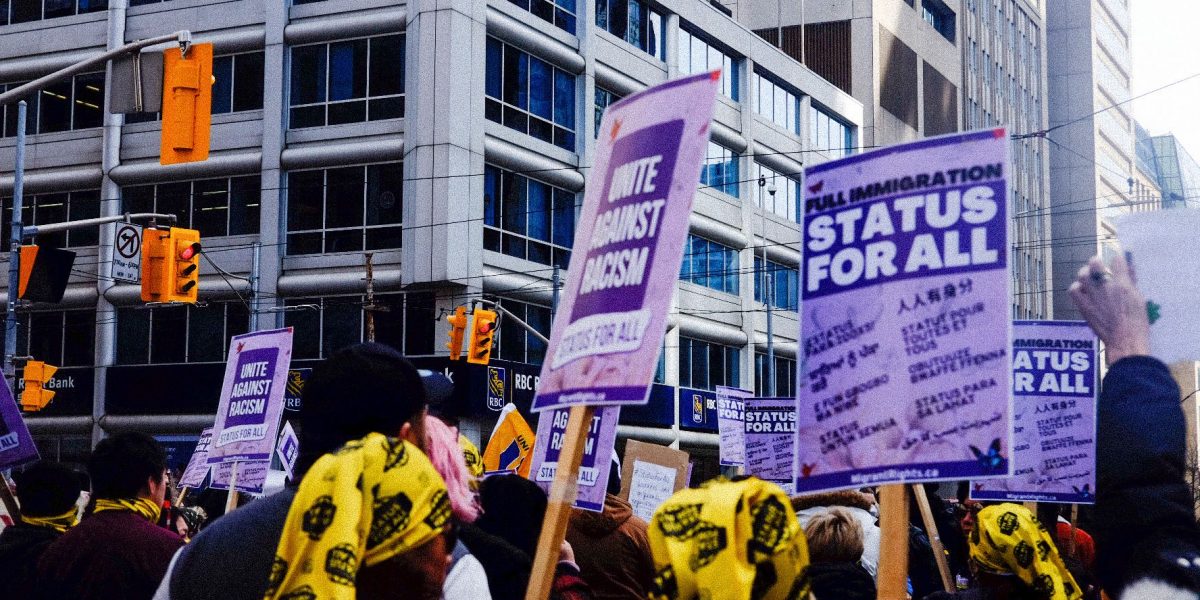 The pandemic has highlighted how immigration policies failed many people who have kept our economy afloat and how Canada must rethink its immigration model. Now migrants across Canada are on the verge of achieving a historic victory, as the government considers providing Permanent Resident status to 1.7 million migrants with precarious status – migrants on temporary work, study or refugee claimant permits and undocumented people. This would be a major win for migrant workers and all workers across the Canadian state.

Migrant injustice during the pandemic: from exploitation to deportation

Canada projects an image of multiculturalism, benefits, and friendliness to entice people worldwide. However, the state’s policies continue to debunk this image. Canada denies socio-economic rights to migrant communities and forces them into precarious circumstances. The pandemic extensively highlighted the realities that racialized migrants face: they have been working on the frontlines of the economy and yet in jobs with minimal to zero protection — be it from COVID-19, immigration threats or fatalities on the job.

Migrant workers’ vulnerabilities significantly stem from their precarious immigration status under work or study visas. The unjust immigration policies continue to push migrants into vulnerable positions as they work within the agriculture, care work and service industry sectors. Over 1.7 million migrants navigate through the cracks immigration status, which forces them into precarious work without protections and with limited access to healthcare.

The exploitation of migrants is perpetuated by the threat of deportation. In 2020, Canada surpassed its highest deportation rate. And now, in 2022, migrant workers continue to face deportation threats despite having helped to fill Canada’s labour shortages and continuing to support the country’s economy. Harsha Walia articulates how Canada formed a standard model of exploitation for other settler-colonial states:, “When your labor is no longer needed, you’re deported, often with your wages unpaid.”

In July, CBSA demanded two families in Alberta prepare to leave, which was halted at the 11th hour before their deportation dates. A month after, another deportation threat followed and was addressed to a migrant worker and an outspoken migrant advocate himself, Danilo de Leon. Despite having contributed to the Canadian economy for many years since 2009, he slipped through the gaps in the immigration system, which forces people to live without status. As of now, at least 500,000 people cannot stay permanently, and eventually are forced to stay here without papers or leave.

Migrants along with their allies have been organizing to demand justice from long before and throughout the pandemic. As a result, the federal government has developed in working on a regularization program that would provide permanent residency to undocumented people. The Federal government passed Motion 44, and Immigration Minister Sean Fraser has been planning pathways that would potentially benefit migrants under work or study visas to obtain their permanent residency. This would be a major step forward for migrant justice and racial justice.

As a settler-colonial state, Canada’s immigration and labour policies have been racist from the start. Canada was founded on genocide against Indigenous peoples, the enslavement of Black people, and a racist approach to migrant workers. Notably within the history of care work, when European women who came from England, Ireland and Finland were the first ones hired as nannies in Canada, they were immediately granted Canadian citizenship. However, this shifted after World War II, as Caribbean workers began to migrate to Canada. Contrary to the immediate permanent residence granted to Europeans, new immigration rules were implemented as Caribbean women could only obtain permanent residency after completing a year of employment. As Robyn Maynard explained in her book Policing Black Lives:

“Black subjugation was merely transformed and rebranded in a multicultural era. While race could no longer be openly used to deny labour rights to non-white workers, immigration status would serve the same purpose. Canada’s temporary work programs provided an updated means of enforcing Black economic precarity and the exploitation of Black labourers in a way that closely mirrored the conditions of Black enslavement.”

As we see imperialism extend its neoliberal policies among formerly colonized countries, the resulting natural disasters, unemployment and poverty continue to push workers to seek labour elsewhere in countries such as settler-colonial economies like the US and Canada. Many migrant workers have no choice but to leave their home countries due to exploitation, colonization and neoliberal policies and seek jobs in a global capitalist system. Today, it is no coincidence that racialized migrants are over-represented in the most vulnerable position and precarious sectors. This divisive immigration system perpetuates the idea of who are worthy of staying versus who are not.

The pandemic has revealed how so-called “low skilled jobs” include all the challenging and essential jobs on which our economy depends–from agriculture to factory work and from care work to delivery work. The devaluation of these jobs has devalued the lives of racialized migrants and makes it easier for bosses to exploit all workers.

But organizing throughout the pandemic has shown none of us are protected until all of us are protected. The fight for paid sick days has been one of the major calls that migrants, community organizers, and advocates have been calling for. Similarly, winning permanent resident status for all migrants (undocumented migrants and migrants with temporary permits) will make it more difficult for bosses to exploit all workers.

If we win, this will be a historic opportunity rooted in years of courage and organizing by migrant workers themselves. The continued fight towards regularization means empowering all workers, especially undocumented workers, to take on the power of the bosses.

Join the upcoming action, Rights, Regularization and Status for All actions, this upcoming Sunday, September 18, at 2 PM at Christie Pits Park in Toronto. To find an action near you check: migrantrights.ca/sep18