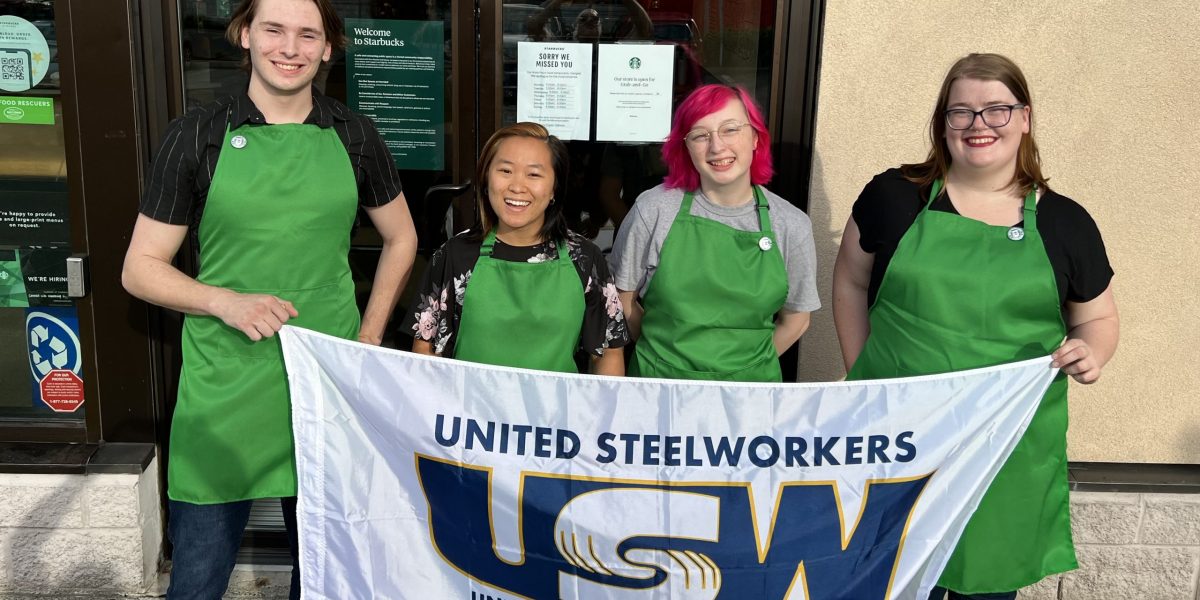 Since August 2021, a wave of unionizations at Starbucks stores across the U.S. has caused many to wonder whether the labour movement is taking off. Prompted largely by the pandemic and driven by local organizing, unionization has brought Starbucks workers increased wages, better benefits, and greater protection. Despite significant pushback from the corporation, the unlikely yet sweeping success of the Starbucks unions proves what strong movements can do.

As of right now, 209 stores in the U.S. and several in Canada have unionized. Richard Minter, Vice President of the Workers United union, said “[t]he scale, the energy, the pace,” of the Starbucks unionizations was unprecedented in labour history.

As the largest coffee company in the world, with over 32,000 stores globally as of 2020, and a net revenue of $24.61 billion USD in 2021, Starbucks has put significant efforts into signaling progressive values. They vocally support Black Lives Matter, LGBTQ+ rights, and trans rights.

But their frequent failures to live up to these values — from calling the police on Black customers to repeatedly failing trans employees — show that their “wokeness” is largely performative. Howard Schultz, longtime CEO of Starbucks, is far from progressive himself and made an ill-fated bid to become the next Donald Trump in the 2020 presidential election.

Starbucks does pay more than minimum wage and offers health benefits for employees who work at least 20 hours per week. They also refer to their workers as “partners” instead of “employees,” possibly to create the illusion of an equitable profit-sharing structure. But when these “partners” became frontline workers during the pandemic, the risks and responsibilities of their jobs increased.

While putting themselves at greater risk of contracting COVID-19, they were burdened with the task of enforcing mask and vaccine mandates on difficult and sometimes abusive customers. Many also say that they were not given adequate PPE and the spike in mobile ordering made the job more stressful.

There are several reasons why Starbucks employees have been able to unionize successfully. Broadly, the Great Resignation gave workers much more leverage than they had had before, forcing corporations to meet their demands or lose critical masses of their workforce.

The demographic of the Starbucks workforce can also tell us a lot about why unionization was successful. The progressive values that Starbucks signals tend to attract younger workers who actually do value racial and gender equality. Many of these workers are in their early twenties and are comfortable in social justice movements, both online and offline. Starbucks’ failure to practice what they preach sparked anger among these young people who were sick of watching corporations espouse progressive values while never using their power to create any real change.

Additionally, although Starbucks is a multinational corporation, the movement to unionize has been largely grassroots-driven. Each shop has 20-30 workers, and organizing took place on a store-by-store basis, among smaller groups of people who already knew each other and often had strong personal ties. The strength of the employees’ personal relationships made it much harder for corporate to break them up, try as they might. Moreover, since each store has to form its own union, workers play a critical role in negotiations. This means that important decisions come from store workers themselves rather than some unknown figure at the top.

In Canada, Starbucks unions have been represented by United Steelworkers, but it has taken local organizing to win — like from Sarah Broad, the barista who led the push for unionization at the Victoria location. Unions don’t receive automatic certification in some provinces, which has delayed the process for several Starbucks in Alberta.

It has taken a long time for more than one of Canada’s 14,000 Starbucks to unionize. But in an industry that is notoriously difficult to unionize, Starbucks workers have shown how to succeed.

After the first stores had successfully unionized, each subsequent store that decided to take that step had precedents to learn from. Workers have shared everything with each other, from the basics of organizing to how to outsmart corporate’s tactics, making the movement stronger as a whole.

Their ability to galvanize a nationwide labour movement with concrete results demonstrates the power of strong movements and local organizing, and gives hope to others in the struggle for decent work.