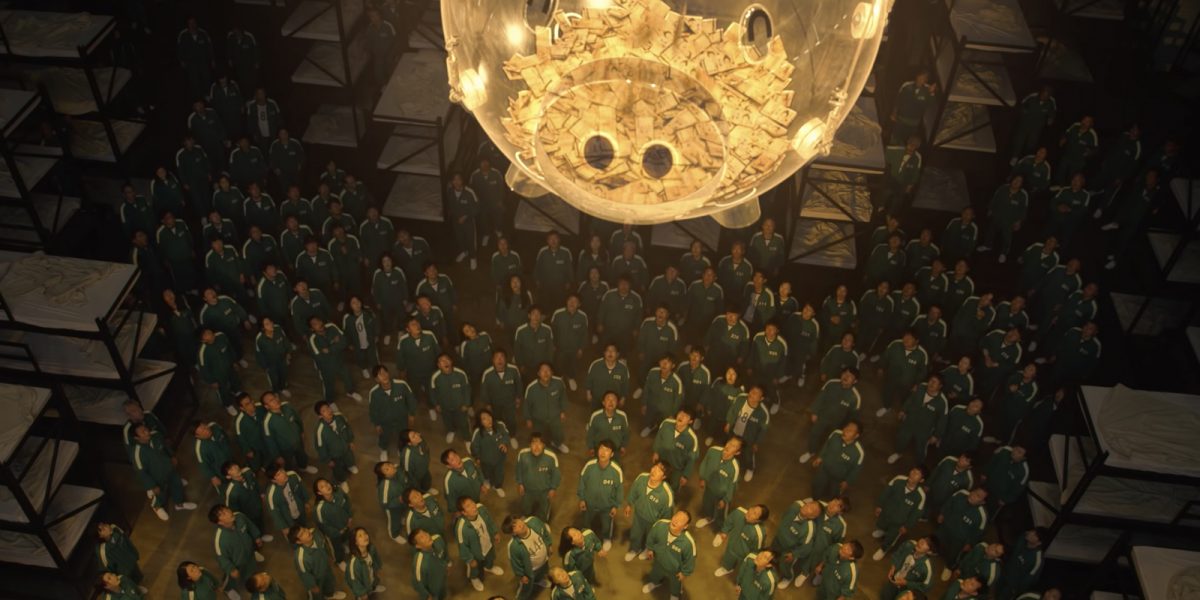 It’s probably one of the more innocuous (although iconic) scenes of the show, but this short sketch that takes place on a subway platform in the first episode of the hit show Squid Game sets the thematic stage for the entire show.

While it’s an extraordinarily entertaining series about a group of heavily indebted game show contestants battling to the death for a massive cash prize, Squid Game is much more than that. It lucidly explores the relationship between debt, labour, and the human body under capitalism.

In the scene on the subway platform, a handsome salesman approaches our downtrodden hero Gi-hun with an interesting proposition: play a game of ddakji with me — a Korean children’s game, similar to Pogs — and win 100,000 won. But if you lose the game, you have to pay me 100,000 won. The proposition entices  our hero, who we already know is a compulsive gambler drowning in crippling debt.

Gi-hun plays a round of ddakji with the salesman and loses. But as we know, Gi-hun doesn’t have 100,000 won to hold up his end of the bargain. So the salesman offers to slap Gi-hun in the face in lieu of the 100,000 won. Gi-hun tries his luck again, but he loses again. He gets slapped again. Over and over.

When Gi-hun finally wins a game of ddakji and returns home with 100,000 won, his incredulous elderly mother at first accuses him of stealing the money. “I didn’t steal anything Mom,” Gi-hun responds, indignantly. “I earned it all. All day, I worked my hands and face off to earn this money for us!”

We are meant to read his response, and the crudeness of the entire exchange on the subway, as a joke. And it is extremely funny. But it also seems to hit at a deeper insight concerning the nature of work under modern capitalism. For many wage labourers, it often feels like we are getting paid to get slapped in the face, both in terms of the physical toll work takes on our bodies as well as the element of degradation built into the hierarchies of the workplace. Subordinates are forced to submit to the whims of their “superiors”, the one’s handing out the cash and therefore the ones who set the rules of the game.

As workers, we are required to suffer these daily blows to our bodies and our sense of self autonomy. And as the creators of Squid Game remind us, those blows are only allowed to go in one direction. When he finally wins his game of ddakji, and after the frustration of getting slapped in the face countless times, Gi-hun takes a swing at the salesman. But the salesman is quick to block his strike, and offers him a wad of cash instead with a sly grin.

Two sides of the same coin

In the cinematic universe of Squid Game (which also happens to be our universe) money and human bodies are treated as basically interchangeable — they are two sides of the same coin, commodities that can be exchanged, one for the other.

The commodity exchange relationship between money and human bodies is most firmly established in the game show world of the Squid Game contest. After a contestant is killed during the course of the games, a massive plastic piggy bank descends from the ceiling, suspended overhead for all the contestants to see. Then, wads of cash fall into the piggy bank through a funnel: 100 million won in exchange for each player’s death.

However, in a brilliant narrative move by the show’s creators, the boundary between the game-show world of Squid Game and the “real” world of the contestants’ everyday lives is left intentionally blurred, and the money-body commodity exchange permeates both spheres.

Our first introduction to the money-body commodity exchange occurs early on, when Gi-Hun is jumped by a group of loan sharks outside a horse-racing gambling hall. Massively in debt and unable to pay back what he owes to the sharks, Gi-Hun is beaten and coerced into signing up as an organ donor.

This scene also introduces us to another recurring theme in Squid Game: the perverse, farcical nature of consent under modern capitalism.

Consent and fairness are apparently very important to the secretive organizers of the Games. After all 456 contestants are taken to a secluded island where the Games are set to take place, one of the masked henchman in charge of the Games reminds them:

“You called and volunteered to participate in this game of your own free will… If you do not wish to participate, then please let us know at this time,” the masked henchman politely announces.

The contestants are then required to sign a “player consent form” before the Games begin.

After the bloodbath, the remaining contestants are horrified and demand they be allowed to leave. In a laudable liberal-democractic fashion, Clause 3 of the consent form does indicate that if a majority of the players vote to terminate, the games will be ended.

Before the voting commences, the game organizers announce the amount of money that has now accumulated in the giant piggy bank after the deaths of 255 of the players: 25.5 billion won. That’s a lot of money, especially for these contestants, all of whom are on the brink of financial ruin.

Which hell to choose?

The second episode of the series, titled “Hell,” is devoted to following the lives of the contestants after returning home to  the “real world.” But as the title of the episode suggests, even though they have escaped the gruesome dystopian nightmare of  the game show world, the money-for-body wager still haunts them in the real world. Have they really left the game after all?

Gi-hun returns home to find his mother hospitalized with a foot infection that is complicated by her diabetes. She’s seen limping her way out of the hospital, but Gi-hun tries to stop her, begging her to remain admitted. “Tell me,” she tells him, “say I stay here, and they treat me. Who’s going to pay the rent in that case? Also, do you know how much it costs to be in the hospital?”The two simply don’t have enough cash to make a money-for-body commodity exchange.

Ali, a Pakistani immigrant labourer and game contestant, returns home to collect wages withheld by his boss, but his boss is still holding out on him. “Look at what working here did to my body sir,” Ali pleads, displaying his hand that was mangled in a workplace accident. “I couldn’t afford the hospital either.” While the destruction of bodies is converted directly into wads of cash in the dystopian world of the game show, in the “real” world that conversion proves less reliable.

And so one of the most devastating moments of the show comes at the end of “Hell”, when we realize that the majority of the contestants have decided — consented even — to return to the Game show world. In a pivotal scene that takes place between Gi-Hun and Il-nam, a lovable old man who is dying of a brain tumor, Il-nam summarizes the plight of the contestants:

“As soon as I got back here, I got some harsh reminders. Yeah, what they say is true. Out here, the torture is worse.”

Even though the Game’s henchmen go to great lengths to preserve the secrecy of the Game world, I don’t think we are meant to see the game show world and the “real” world of the characters, or even our world, as necessarily distinct. Rather, the game show world of Squid Game reproduces the arbitrary brutality and widespread devaluation of human life characteristic of our capitalist reality, distilled down to its essence.

Some commentators have critiqued Squid Game for what they view as excessive depictions of violence. These critics recognize that Squid Game intends to critique the commodification of human bodies under capitalism, but they argue that the series’ reliance on graphic violence as a cinematic technique ends up reproducing the dispensability of human bodies for capitalist consumption.

But if Squid Game really is an elaborate metaphor for our capitalist reality, can depictions of violence really be avoided? The daily violence capitalism wreaks upon our bodies is often relegated to the margins of social visibility, confined to the private traumas of denied healthcare coverage, workplace injuries, experiences of houselessness, and the gradual disintegration of our bodies under the repetitive tasks of menial labour.

The game show world of Squid Game compiles these localized experiences of daily violence under capitalism and puts them on display on a singular stage, for all to see. It is not so much that we are not used to seeing bodies destroyed and mutilated — we just aren’t used to seeing them all in one place, gathered in dramatic heaps of carnage.

Squid Game only holds a mirror up to our society and asks us to take a cold, hard look. Can we fault the creators if we are offended by what we see?