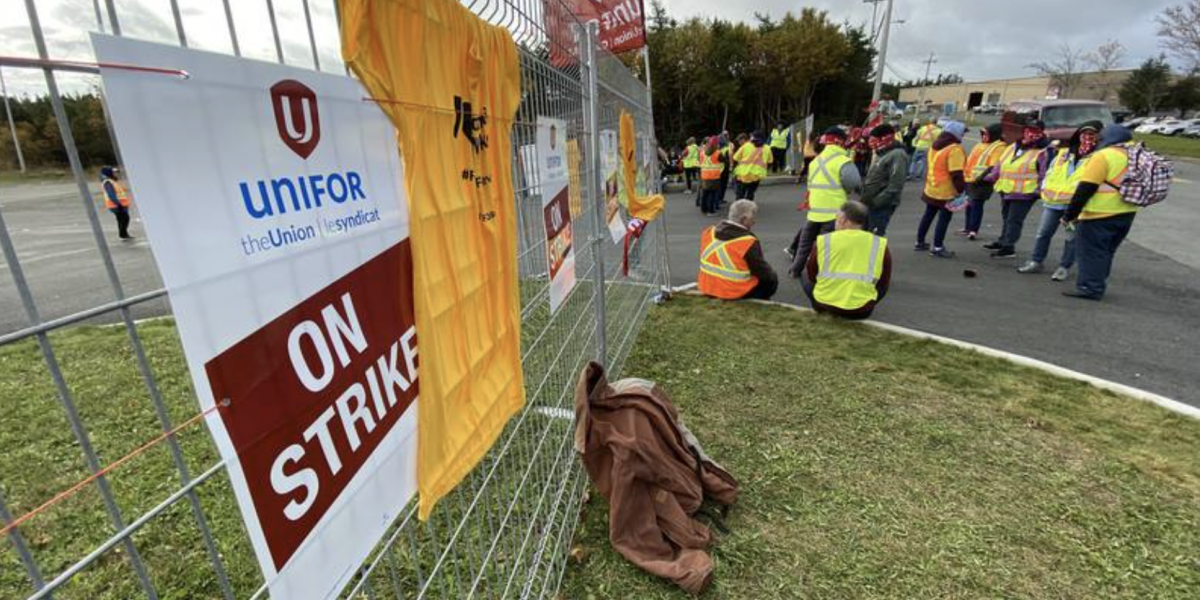 Over 1400 workers at 11 Loblaws-owned Dominion grocery stores in Newfoundland have been on strike for better pay and working conditions since August 22. They are up against one of Canada’s richest people and a corporate giant. Their strike is extremely important as it will set a precedent about will pay for this crisis. Will it billionaires or workers? Local 597 is fighting courageously for better pay and working conditions, using militant tactics such as picketing distribution centres and other secondary locations. But they need the entire labour movement’s solidarity and resources to take on the billionaire Galen Weston. Please consider using this draft resolution to get your local union, labour council or other labour body to support the strike and donate to the local to help them win their strike.

Whereas over 1400 workers at the 11 Loblaws-owned Dominion grocery stores in Newfoundland, represented by Unifor Local 597, have been on strike since August 22 for fair wages, paid sick days and full time jobs; and

Whereas over the years Loblaws has turned most jobs at Dominion into low-paying part-time jobs with little to no benefits; and

Whereas in 2019 alone, 60 full-time positions were removed and over 80 percent of the workers at Dominion are currently part-time and barely make over minimum wage; and

Whereas the majority of workers at Loblaws Dominion stores make less than $12 an hour; and

Whereas Loblaws instituted a $2/hour pay increase for all its workers as pandemic pay but the pandemic pay was cut in June; and

Whereas Galen Weston Jr, the chairman of the Loblaw Companies Limited, has a net worth of $10.9 billion andSarah Davis, the Loblaw CEO, received a total compensation of $6.7 million in 2019; and

Whereas in 2020, Loblaws saw its first quarter profits jump 21 per cent compared to the same time last year — an increase in net earnings of $42 million over the first quarter of 2019:

Be it resolved that [INSERT ORGANIZATION] send a public letter of solidarity to the striking Dominion workers in Newfoundland; and