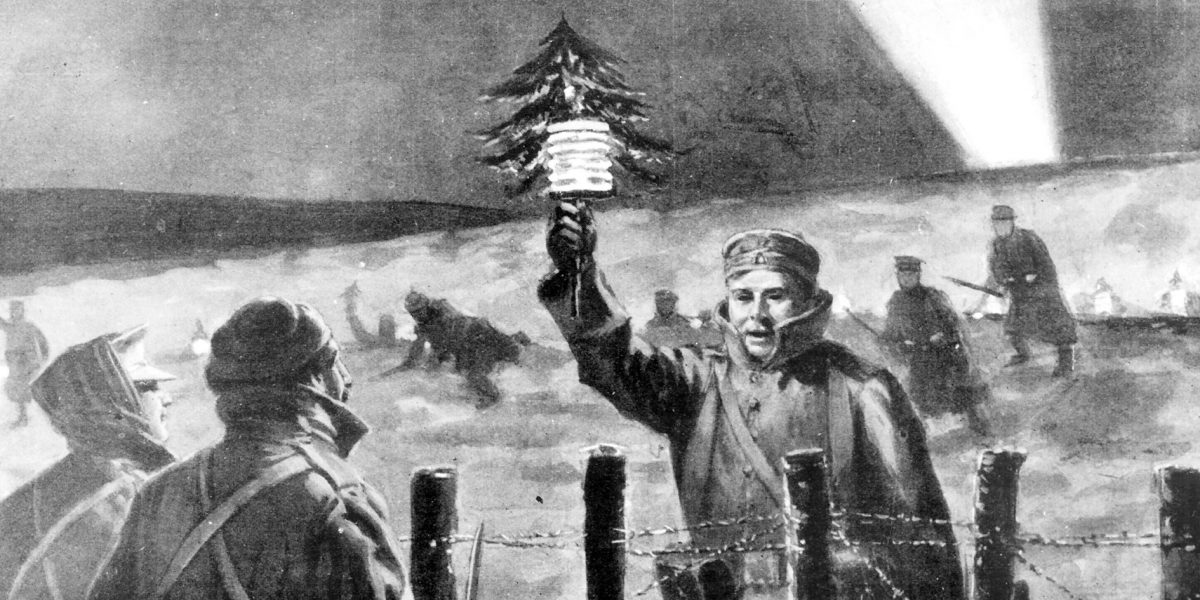 On Christmas Day 1914 over 100,000 soldiers from warring nations in Europe put down their weapons and celebrated Christmas together in defiance of their ruling classes. The Christmas truce of 1914 is usually dismissed as a minor episode of the First World War, sanitized as a celebration across all the ranks, or used as a commercial to sell chocolate. But the accounts of soldiers themselves show that it was widespread and in some places long-lasting, driven by rank-and-file soldiers and only stopped through repression from the higher command.

Over a century ago the imperial competition that had produced a scramble for colonies drove Western powers against each other. They each demonized the other side and claimed it would be a short war over by Christmas. But over the new few months the soldiers sent to die for the Empire experienced the brutal reality of trench warfare. Knee deep in mud, fighting frostbite and trench foot, soldiers shot and were shot at by people just like them, at close quarters.

Solidarity across the trenches

Governments had ignored the Pope’s call for a one-day truce, and when it came it was not a “Christmas miracle” that simply materialized on December 25. Instead the truce emerged from the trenches themselves in the weeks leading up to the holiday, as minor episodes of fraternization amongst ordinary soldiers began to multiply—including breakfast truces, shooting matches, exchanging items and sharing songs. As one soldier wrote, “On a quiet night we used to sing to each other…Then an officer of one side or the other would come and stop it by ordering a few rounds of fire. We used to be sporting and fire high with the first round.”

As early as December 2, General Smith-Dorien wrote about the “danger” of the emerging friendship: “Weird stories come in from the trenches about fraternizing with the Germans. They shout to each other and offer to exchange certain articles and give certain information…There is a danger of opposing troops becoming too friendly…I therefore intend to issue instructions to my Corps not to fraternize in any way whatever with the enemy.”

A few days later he wrote instructions trying to prevent an outbreak of peace, so the slaughterhouse of war could continue:

“Troops in trenches in close proximity to the enemy slide very easily, if permitted to do so, into a ‘live and let live’ theory of life. Understandings—amounting almost to unofficial armistices—grow up between our troops and the enemy, with a view to making life easier, until the sole object of war becomes obscured, and officers and men sink into a military lethargy from which it is difficult to arouse them when the moment for great sacrifices again arises…Friendly intercourse with the enemy, unofficial armistice (eg ‘we won’t fire if you don’t, etc) and the exchange of tobacco and other comforts, however tempting and occasionally amusing they may be, are absolutely prohibited.”

But, contrary to military orders, that’s exactly what happened—though in an unorganized and uneven way that shaped its outcome. As Malcolm Brown and Shirley Seaton document in their detailed account, Christmas Truce:

“It was possible for a battalion to be completely unaware as to whether its near-neighbours were or were not taking part in a truce, so that what happened on Christmas Day was not, so to speak, a contagion of goodwill spreading along the line, but a series of individual initiatives at a very considerable number of places and times…The Christmas truce held—to a greater or lesser extent—over more than two-thirds of the British-held sector; but elsewhere Christmas came and went leaving little trace.”

As early as December 20 in some places, soldiers used the holidays to put down their weapons and bury the bodies littered across No Man’s Land. By interacting with each other, working class soldiers discovered they shared much in common. As a British soldier wrote, “one of the two Germans jocularly remarking that he hoped the war would end soon, as he wanted to return to his former job as a taxi-driver in Birmingham.” Some remarked that “the papers had been responsible for the whole war,” and that “the Germans are just as tired of the war as we are, and said they should not fire again until we did.”

At its height 100,000 troops participated in the truce. German, French, Belgian and British soldiers (including troops from India) exchanged music, gifts, played games and took photographs, and held up Christmas trees—a German tradition that was in the process of spreading across Europe. “We achieved what the Pope himself could not do and in the middle of the war we had a merry Christmas,” one soldier wrote.

While some officers were ambivalent about the truce, others quickly tried to stop the “dangerous” peace. As one officer wrote, “Hearing of the fraternization I hastened to the scene to investigate, and found the whole of No Man’s Land crowded with our men and the Germans amicably intermixed…For a moment I gazed at the curious sight, and then realized how absolutely wrong and dangerous it was, and decided to stop it.”

But the truce did not end so easily. As a frustrated General Smith-Dorien claimed, the only path to peace was more war: “Any orders I issue on the subject are useless, as I have issued the strictest orders that on no account is intercourse to be allowed between the opposing troops. To finish this war quickly, we must keep up the fighting spirit and do all we can to discourage friendly intercourse. I am calling for particulars as to names of officers and units who took part in this Christmas gathering, with a view to disciplinary action.”

Far from being a “war for freedom and democracy,” WWI was not only launched to defend colonialism but it only continued by repressing the troops sent to fight. It was not human nature but military discipline that enforced the war. French officers replaced some of their soldiers who refused to shoot, while German officers threatened some of their soldiers with the death penalty. But even then, some soldiers did what they could to resist—in a tragic last effort to maintain peace. According to one account:

“The difficulty began on the 26th, when the order to fire was given, for the men struck…Finally, the officers turned on the men with ‘Fire, or we do—and not at the enemy!’ Not a shot had come from the other side, but at last they fired, and an answering fire came back, but not a man fell. ‘We spent that day and the next,’ said Herr Lange, ‘wasting ammunition in trying to shoot the stars down from the sky.’”

On December 29, the German army issued an order forbidding all fraternization, which would be considered high treason (which carries the death penalty). But still ordinary soldiers tried to maintain peace with their real comrades on the other side of the trenches. As a German message to the British trenches said, “Dear Camarades, I beg to inform you that is forbidden us to go out to you, but we will remain your comrades. If we shall be forced to fire we will fire too high.”

As Brown and Seaton note:

“In certain sectors the mood inspired by the events of Christmas lingered on with incredible stubbornness… It can reasonably be claimed that the Christmas truce lasted in places almost to Easter, but there is also little doubt that by Easter it was over and done with, consigned to history, a thing of the past. The long truce was finally broken, after a little over a hundred days.”

From spontaneity to organization

The Christmas truce came only five months into a 52 month war that killed 10 million soldiers and 7 million civilians; if soldiers had succeeded in maintaining the peace they would have saved millions of lives. But they were unorganized and up against a military command that used threats of execution to restore order. As the German army commanded in the lead up to Christmas 1915:

“Any attempt at fraternizing with the enemy (agreement not to fire, mutual visits, exchange of news, etc) such as occurred last year at Christmas and New Year at several points on the Western Front, is strictly forbidden; this crime will be considered as verging on high treason. General HQ have issued instructions, dated the 12th December, that fire will be opened on every man who leaves the trench and moves in the direction of the enemy without orders, as well as on every French soldier who does not make it clear that he is a deserter.”

It took three more years of slaughter for the spontaneous instinct of the truce to become an organized opposition to war—including mutinies in the French army in April 1917, a revolution in Russia in October 1917 and a revolution in Germany in November 1918 (which gave us Remembrance Day). Similar organization—outside and inside the military—ended the Vietnam War, as a panicked US Colonel wrote in the Armed Forces Journal in 1971:

“By every conceivable indicator, our army that now remains in Vietnam is in a state approaching collapse… Widespread conditions among American forces in Vietnam that have only been exceeded in this century by the French Army’s Nivelle mutinies of 1917 and the collapse of the Tsarist armies in 1916 and 1917.”

The Christmas truce reminds us of the real roots of war, the potential resistance from rank-and-file soldiers, and the importance of an organized anti-war movement.