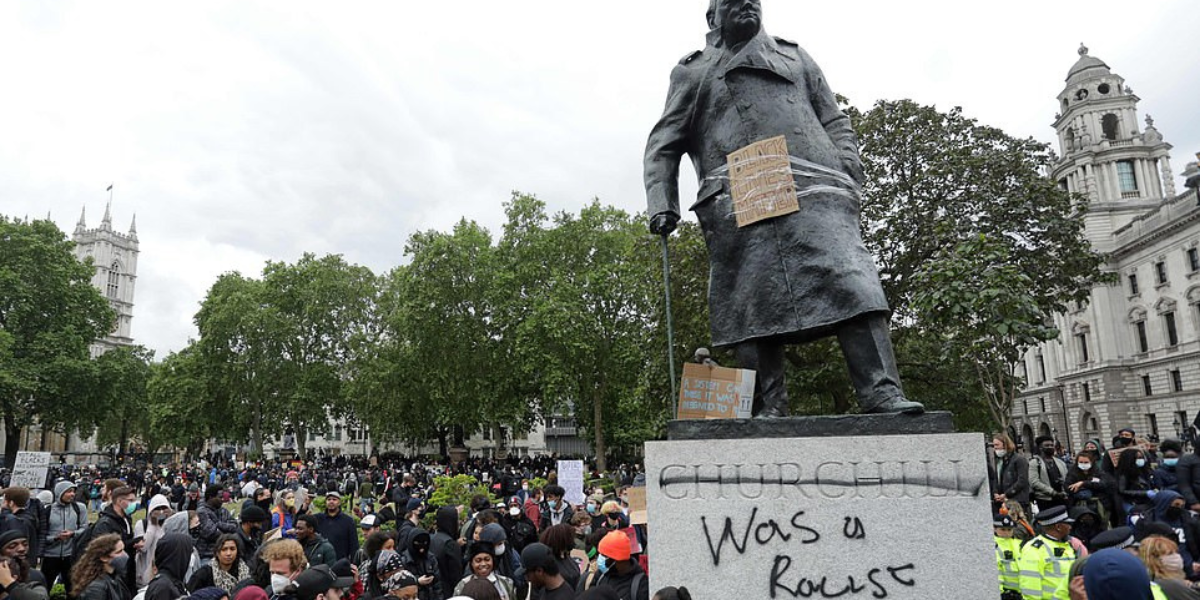 Winston Churchill: His Times, His Crimes by Tariq Ali (Verso, 2022)

Nearly 60 years after his death Winston Churchill remains a venerated figure within the anglosphere. Award winning films, TV shows and countless books celebrate Churchill as a figure of strong moral fibre who stood tough against fascism when others equivocated.

In Canada, numerous parks and streets named in his honour dot our cities, while his statues can be found in Edmonton, Halifax, Fredericton, Toronto and Quebec City. Our politicians and media pundits routinely reference his aphorisms about democracy and politics. Churchill the man is long-dead, but the myth of Churchill lives on, serving to reinforce and justify Western imperialism.

The Churchill remembered and celebrated by our politicians and the media is a far cry from the political figure. Tariq Ali’s new book, Winston Churchill: His Times, His Crimes is a much needed correction to the cult of Churchill.

Ali’s biography is not simply a recounting of Churchill’s life, it is a biography that looks at the development of Churchill as a political figure within the broader political context of the British empire. Churchill, above all else, was an ardent defender of British imperialism.

Youthful adventure in the empire

Born into the British aristocracy in 1874 Churchill’s youth and worldviews were shaped by the trappings of his class position. After attending an elite boarding school, Churchill was admitted into the Royal Military Academy Sandhurst, where he would go on to serve as a military officer, a common rite of passage for men of the British elite.

Longing to experience the rush of war, but with no active British colonial war on the horizon, Churchill seized on the outbreak of the Cuban War of Independence in 1895. Obtaining leave from the military, Churchill secured a newspaper commission to cover the Cuban-Spanish war. Ever the imperialist, his sympathies lay with the crumbling Spanish empire.

Churchill’s subsequent military posting took him to India, Sudan and South Africa. In Sudan, Churchill witnessed the crushing of the resistance to the British empire led by the Mahdi. He was effusive in his praise of the brutal means by which the British empire crushed the resistance. In South Africa, Churchill reported on the counter-insurgency efforts waged by the British against the Boers. Through all of these imperial adventures Churchill used journalism to trumpet the cause of empire and shamelessly self-promote.

Entering Parliament in 1900 as a Conservative, Churchill split from the Conservatives to join the Liberal Party in 1906 over his support for free trade. He served as Home Secretary in the Liberal cabinet and used his position to oppose the interests of workers. He was also a staunch foe of women’s rights, opposing extending the franchise to women.

When Europe’s imperialist rivals went to war in 1914 Churchill served in the war cabinet of Lloyd George as the Lord of the Admiralty. Churchill advocated for the Dardanelles invasion, which saw troops massacred in Gallipoli, and disgraced Churchill’s reputation amongst a section of the ruling class.

After the War Churchill became Secretary of State for War and Air and then Secretary of State for the Colonies. In the former role he was one of the main political architects of the British intervention into revolutionary Russia. Churchill deeply feared and despised the Bolshevik revolution; it was for him much worse than German militarism, as it stood for everything he was against.

In his role as Secretary of State for the Colonies Churchill oversaw the installation of authoritarian monarchies across the Middle East as well as the suppression of the radical wing of the Irish republican movement. He helped push through the disastrous partition of Ireland which still haunts Irish politics to this day.

During the 1920s Churchill rejoined the Conservative Party and served as the Chancellor of the Exchequer. Churchill, against the advice of economists like John Mayanard Keynes (who wrote the pamphlet The Economic Consequences of Mr Churchill in response) moved British currency to gold standard in 1925. This triggered deflation and growing unemployment, creating the economic conditions for the 1926 general strike. To defend locked out miners and prevent wage cuts, the Trade Union Congress (reluctantly) called a general strike. Over 2.5 million workers in Great Britain took part, and the country was shut down. Churchill took an active role in organizing the government response; he led the way by creating and publishing the British Gazette, a government propaganda paper. He also helped organize far-right groups to help smash the strike. Ultimately the forces of moderation, the TUC leadership and the Labour Party sapped the movement’s resolve and the strike was defeated.

It was soon after on a trip to Italy in 1927 that Churchill expressed outright sympathy for fascism and the fascist leader Mussolini saying “If I had been an Italian I am sure that I should have been whole-heartedly with you from the start to finish in your triumphant struggle against the bestial appetites and passions of Leninism.” No doubt his anti-communism and his recent experience in suppressing the 1926 general strike made Mussolini’s fascist movement appealing to him.

Rather than a momentary lapse of judgement, as Churchill supporters claim, his openness to fascism was rooted in a shared reactionary worldview. Thus, during the Spanish civil war, it was not the forces of democracy and liberty that Churchill supported, but those of fascism and reaction. Like a great majority of the British ruling class, Churchill was sympathetic to fascisim when it was lined up against workers and Communists.

What Churchill is most idealized for is his staunch opposition to appeasement with Hitler. Countless books and films paint the picture of him, standing alone against the rising tide of Nazism. Ali’s book is a welcome correction to this narrative. Before 1938, Churchill, like the rest of the British ruling class, was more than comfortable with appeasing Hitler. It was only when it became clear that Hitler’s imperial designs threatened the British empire that Churchill became a consistent and vocal proponent of taking on Hitler. In the lead up to the war this put him at odds with his own Conservative Party. After appeasement failed and Chamberlain resigned, Churchill became Prime Minister in 1940.

Hitler swept across Europe and North Africa in the early stages of the war, while the Japanese empire entrenched itself across East Asia. The British empire was crumbling and only the entry of the USSR and to a lesser degree the United States prevented the victory of Nazism.

In India, the British empire took the country into war without any input from Indian leaders or the people, in the process stoking the flames of religious sectarianism. Ramping up industrial production for the war effort meant consciously stripping some provinces of vital grain. In Bengal, this, along with outright profiteering on the part of the British, caused wide scale famine in 1943, killing up to 5 million people. As Mike Davis has noted, the famine was man-made, a product of colonial rule.

The callousness towards the lives and democratic aspirations of people across the globe is a feature of Churchill’s politics. At Yalta, Churchill, along with Roosevelt and Stalin, carved up the world into spheres of influence. The democratic will of people was never considered. In Greece, where the British were assigned dominion, the Communist Party, a leading force in the resistance to the Nazis, was immensely popular. If free elections were held there was little doubt the Greek Communist Party would win. Churchill ensured it didn’t. The British military intervened on the side of the monarchy to violently repress the Greek Communist Party during the Greek Civil war.

Churchill’s loss of the 1945 election to Labour was an expression of rising expectations of the working class in the UK shaped by full employment and a changing view of the role of government in society via the war. Churchill remained in opposition stoking the flames of militarism, anti-communism and imperialism. Churchill’s Conservative Party was returned to government in 1951. The Labour Party in office introduced a number of reforms early on, but had failed to promise to make more radical changes, and on foreign policy they were dutiful servants of the empire.

Churchill’s last years as Prime Minister saw him oversee the brutal counter-insurgency campaigns in Kenya and Malaya. The British empire was fading, but it was still bloodthirsty. The British in these conflicts used concentration camps and torture, committed horrific war crimes and killed tens of thousands.

Ali’s book thoroughly debunks the cult of Churchill by laying out the actual political life of Churchill. Rather than a biography that examines the inner life of a powerful man, we are told the story of a ruling class that has produced such a political figure. Churchill was an unvarnished racist, but Ali is correct to point out that it is more important to understand Churchill as one part of a broader class that was governing a racist capitalist system.

Churchill continues to be deified, especially amongst the ruling elite in the West, because he was an ardent believer in empire. Churchill is a symbol for the continued project of imperialism, colonialism and capitalist rule. Underneath the charming and quirky portrayals we are fed in the media lies a politician who supported almost every reactionary cause of his day and whose crimes in service of the empire extended across the globe. It is time to put Churchill in his rightful historical place, not to moralize about history, but to finally comprehend and learn from it.