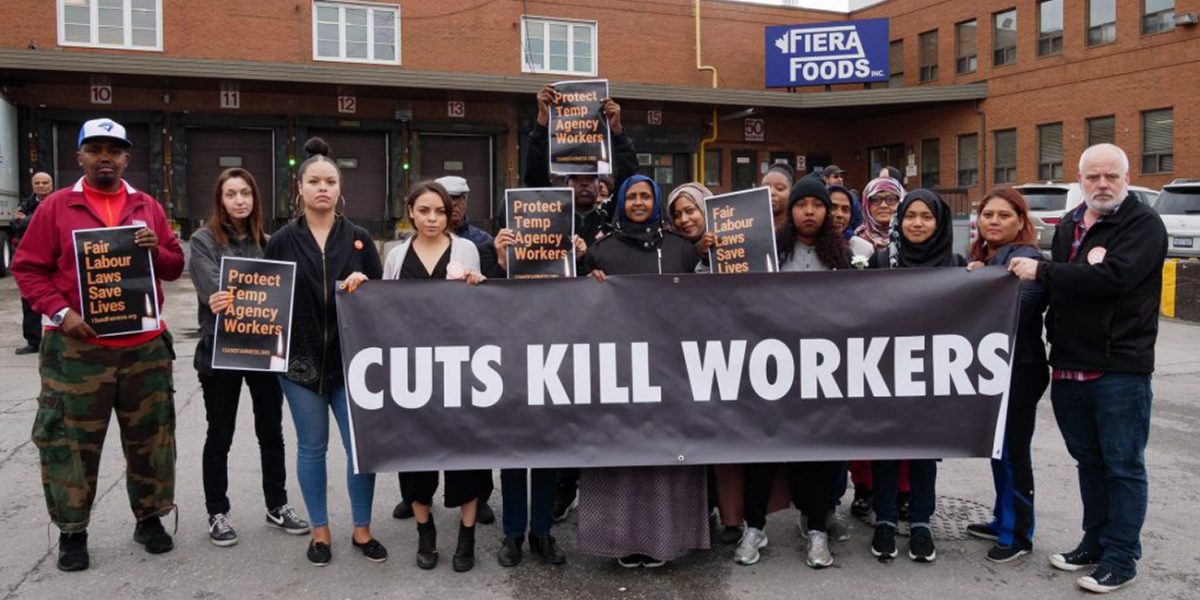 “Worker dies after industrial accident,” reported the media. But an abstract worker did not simply pass away, and this was not a freak accident. The headline should have read: precarious working conditions at Fiera Foods killed Enrico Miranda. Fiera Foods is an industrial baker, but their reliance on temp agencies and precarious work have turned them into a slaughterhouse: five deaths since 1999, including two since Doug Ford weakened workplace protections.

The same workplace broke Miranda’s finger earlier this year, and took his life last month. How can a company get away with such a record of injuries and deaths? Fiera Foods uses temp agency workers for 70% of their workforce, and under current legislation when there is a workplace injury it is the temp agency that is held responsible—not the company whose dangerous conditions killed the worker.

Free from any responsibility, the company can work people to death. Two years ago, Toronto Star reporter Sara Mojtehedzadeh went undercover at Fiera Foods, and described the conditions: “Supervisors shout at us to wake up. They shout at us to move faster, pinch nicer, work harder. No one talks through the noise and exhaustion…. I am so consumed by wrangling the pastries that I don’t notice the forklifts whizzing by immediately beside me until I am startled by a loud horn. A metal guard rail covers part of the line but not where I’m standing. I make a mental note not to step to my right.”

This led to another death last year, and clearly conditions have not changed. After the most recent death, a fellow temp worker at Fiera Foods described their conditions: “Every time a worker gets killed at work, they don’t even shut down the operation. There’s no closure, so there’s no respect for our co-worker who died, or for us. They are heartless. A union rep came to give flyers to workers, but management forced us to throw them in the garbage…They are aggressively commanding us. And all of us are immigrants. Don’t they have respect for workers’ rights and human rights? We can see racism in the way people of colour are treated. We demand respect. We demand better working conditions, safe jobs, better pay, and benefits.”

It’s also not an accident that migrant and racialized workers are bearing the brunt of workplace injuries, as they are concentrated in the most precarious jobs. Miranda immigrated from the Philippines along with his wife (a migrant caregiver), and Amina Diaby (killed in 2016) was a refugee from Guinea. Fiera Foods prides itself on “our commitment to being a starting point for newcomers,” and “giving back, especially to emerging communities.” But Miranda worked as a “temporary” worker for a decade, including five years with Fiera Foods. This job was not the starting point for a better life but a conveyor belt to injuries and death.

The only thing Fiera Foods has given back has been funeral costs. But rather than taking responsibility and changing their conditions, they blame their own workers. Fiera Foods explained their first death in 1999 as “a 17-year old temporary worker employed as cleaning staff became trapped in a large mixer when another temporary worker accidentally pressed the wrong button while trying to help him out, starting the machine.” Describing conditions that killed Amina Diaby two weeks into her job, the company said, “she had removed her lab coat without permission, which is against our policy about loose clothing, and was wearing a hijab…When the European Court of Justice ruled in March 2017 that companies could ban employees from wearing hijabs as part of broader prohibitions that include other religious and political symbols, companies were left on their own to try and make sense of this ruling and apply it to their own workforces.”

But the problem is not a multiracial workforce, and restricting the civil liberties will not make the workplace safe.

Ford: government of the 1%

But Fiera is right about one thing: that their practices are “in line with our competitors.” There are an estimated 1,700 temp agencies across the Greater Toronto Area. That’s the problem: competition for profit, enforced by legislation that allows companies to maintain a permanent “temporary” workforce, paid poverty wages an denied workplace safety.

As Marx wrote, “Capital is reckless of the health or length of life of the labourer, unless under compulsion from society. To the out-cry as to the physical and mental degradation, the premature death, the torture of over-work, it answers: Ought these to trouble us since they increase our profits? But looking at things as a whole, all this does not, indeed, depend on the good or ill will of the individual capitalist. Free competition brings out the inherent laws of capitalist production, in the shape of external coercive laws having power over every individual capitalist.”

That’s why the solution is not simply to shut down Fiera Foods, which would throw their workers out of a job. The solution is to listen to the workers themselves: “We demand respect. We demand better working conditions, safe jobs, better pay, and benefits.”

Echoing these demands, the Fight for $15 and Fairness compelled the previous Liberal government to enact Bill 148—providing equal pay for equal work and stopping companies like Fiera Foods from contracting out the ongoing financial costs of workers compensation for its agency workers. These policies reduced  the economic incentive for companies like Fiera Foods to hire workers indirectly through temp agencies. But the Ford government restored the economic incentives for companies to contract out unsafe work through temp agencies with Bill 47. In addition Ford cut back on company inspections, giving free reign to companies to increase the exploitation of their workers—killing Miranda as a consequence.

But Ford can be compelled to reverse his policies. Anti-poverty groups just forced Ford to stop cuts to the Transition Child Benefit, while teachers threatened strike action to make gains at the bargaining table—and walk-ins on October 10 built on that momentum to support public education. Now the $15 and Fairness movement is trying to push Ford to make legislative change to prevent further deaths. After the news of the latest death, 125 labour and community activists rallied outside Fiera Foods, and while the company couldn’t be bothered to stop production after Miranda was killed they cancelled shifts (without pay) during the rally in an attempt to undermine solidarity.

But solidarity is continuing with Fiera workers, and there’s a petition to the Ford government demanding:

2. Make it illegal for companies to rely on temp agency workers for the bulk of their workforce. In particular:

– Provide just cause protection for a temp agency worker if, at the end of the assignment, another temp worker is hired to do the work previously done by the terminated temp worker;

– Place a 20% cap on the number of temp agency workers used by a company at any given time;

3. Restore the provisions of Bill 148, including: equal pay for temp agency workers, and for contract and part-time workers; paid emergency leave days; fairer scheduling provisions; measures to make it easier for workers to join unions; and an immediate $15 minimum wage.

* Sign the $15 and Fairness petition to the Ford government

* Contribute to the Funeral and Family Support Fund for Enrico Miranda