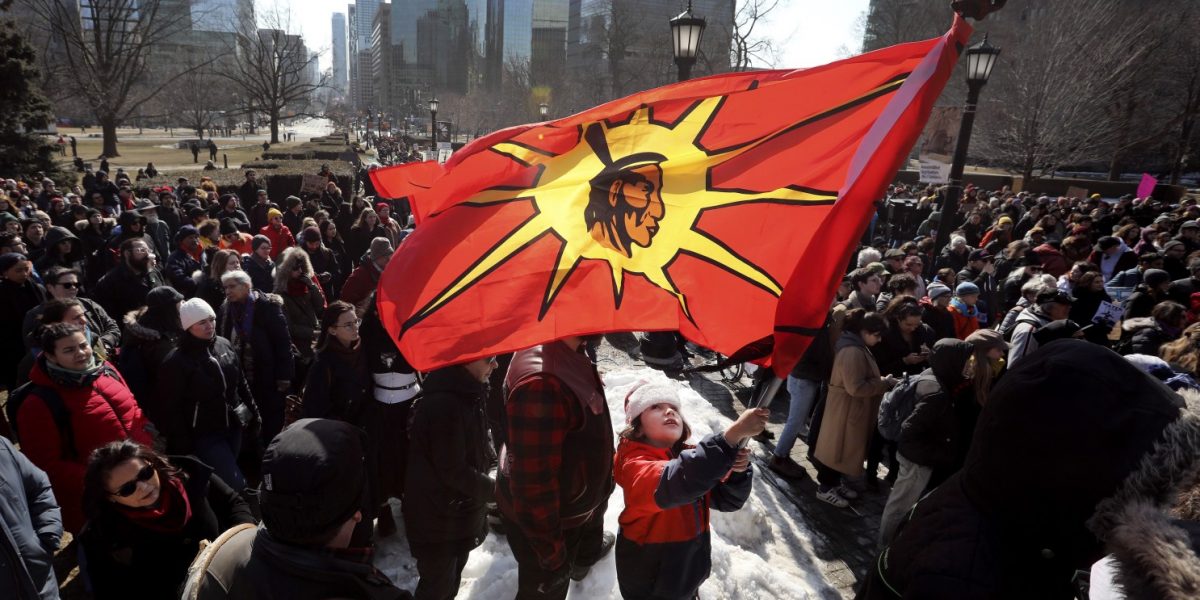 Half a century ago, I helped in publication of Richard Fidler’s pamphlet Red Power in Canada, published in 1970 by the League for Socialist Action. It included the program of a visionary Indigenous group on the West Coast, the Native Alliance for Red Power, that called for Indigenous sovereignty and reparations.

Three years earlier, our rulers had organized celebrations of what they called “Confederation” – the formation of the state of Canada. This extravaganza was met by wide scepticism, and not only among First Nations. Masses of Quebeckers called Confederation “les cent ans d’injustice.” Socialists in the rest of Canada picked up on this, as in a “centennial issue” of Young Socialist Forum whose front cover declared, “One Hundred Years of Injustice.”

We challenged not only the results of Confederation but the unification itself. It was not democratic. The only popular involvement was the movement led by Louis Riel, and it was crushed by military force. We socialists, picking up on Lenin’s term for the Russian Czarist empire, called the Canadian state, “a prison house of peoples” and proposed a general jail-break.

Thirty years ago, the constitution of so-called Canada was rewritten. Indigenous peoples were excluded from negotiations. Quebec, whose proposals were ignored, refused to sign. These wrongs have not been righted.

So when we speak of colonialism in Canada, this refers not just to the treatment of Indigenous peoples but to the pervasive racist colonialism of the state as a whole.

Colonialism reached Turtle Island as an expression of early European capitalism’s drive for profits. Colonizers viewed profits as the ultimate and sole purpose of humankind. Colonial enterprises sought to scoop up precious metals, seize the land, and subjugate native peoples.

Karl Marx referred to the treatment of Indigenous peoples in this hemisphere “extirpation, enslavement, and entombment in mines.”

At first, indigenous peoples welcomed colonizers and provided assistance and knowhow needed to survive in a harsh environment. In return, the colonizers brought deadly infections to Turtle Island, which ultimately swept away up to 90 percent of the indigenous population, shattering the survivors’ social cohesion and capacity for resistance.

The colonizers’ message to indigenous peoples was:

All four methods were employed, depending on how best to secure profits.

Through the centuries, settler society was never able to coexist in harmony with Indigenous civilizations. Why this incompatibility?

Each tribe had territory held in common by its members… The common land of each tribe was usually respected by neighboring tribes….Before the Europeans arrived, Indian society was governed without police, without kings and governors, without judges, and without a ruling class….There were no poor and needy by comparison with other members, and likewise no wealthy and privileged.…. Members of the community were bound to give each other assistance, protection, and support, not only as part of their economics, but as part of their religion as well. Sharing was a natural characteristic of their way of life. Individual profit-making was unknown. Everyone was equal in rights and benefits.

In addition, as Verna St. Denis remarks, pre-conquest Indigenous society was not stained by endemic male supremacy and patriarchy:

[A]boriginal women claim that Aboriginal cultures do not have a history of unequal gender relations; in fact … Aboriginal women occupied positions of authority, autonomy and high status in their communities.”

In settler society, by contrast, sharing and solidarity were the exception; class exploitation and profiteering were the rule.

The communal civilization of Indigenous peoples could not be assimilated into capitalist settler society; it had to be destroyed.

How did this work out in practice?

The fishing industry off Newfoundland required lodgments on land, but the impact of those settlements, reinforced by cruelty and violence, led to the extinction of the island’s original Indigenous inhabitants.

Then there were furs. Fortunes were made by selling animal furs acquired from Indigenous peoples. The fur trade was a large-scale capitalist industry extending to the Rockies. Unlike fishing, the fur trade required a Native work force and a substantial settler community.

Meanwhile, the settler work force provided transport and produced food. Settlers who transported furs and trading goods, the coureurs des bois – were brutally exploited. The children born of their unions with indigenous women became victims of racism, the Métis. The settler food producers – peasants – were feudal serfs, toiling for the profit of feudal lords or seigneurs. And all these layers were victims of the whims and extortions of the colonizing power, first France and then England.

The English conquest in the eighteenth century added a new layer of colonial oppression. The francophone population, whether White or Métis, now suffered colonialist oppression at the hands of the British conquerors; Anglophone settlers, in turn, were subject to the extortions of their royal masters in London and their agents in the colonies.

And while the fur trade had integrated Indigenous people into the capitalist economy as its basic labour force, new industries such as logging and agriculture and transportation infrastructure excluded them entirely. Indigenous people were confined to detention camps (reserves), condemned to deprivation, hunger, starvation, illness and death. The survivors were locked into Canadian apartheid.

The challenge before every democratic anti-colonialist movement was to bring together all the victims of capitalism and colonialism, from Indigenous trappers to Prairie homesteaders to Nova Scotia mine workers to Quebec habitants. This task was posed many times.

The rebellious British colonies south of the St. Lawrence occupied Montreal for a time in 1775, but they did not succeed in linking up with francophone Québécois. Meanwhile, First Nations led among others by Joseph Brant fought on the British side and were rewarded by further dispossession and marginalization.

In 1837, working people in the settler colonies then called Upper and Lower Canada (Ontario and Quebec) rose in revolt against colonialist dictatorship. The movement in Quebec included among its aims a pledge of full rights to the indigenous population, quoted by Stanley Ryerson in his Unequal Union: “The Indians shall no longer be under any civil disqualification, but shall enjoy the same rights as any other citizens of Lower Canada.”

But in 1837 First Nations were too weakened to affect the outcome, and the uprising was defeated.

During the next decade, Britain granted autonomy to its discontented settlers in Canada. Settler society was plagued by antagonism between anglophone and francophone communities. Confederation in 1867 codified inequality and was imposed without popular consultation. The Anglo bourgeoisie held the levers of power.

The focus of anti-colonial struggle then shifted to the Canadian West, and particularly to the democratic struggle led by Louis Riel. I will leave it to Peter Kulchyski and Maria Paez to speak of this. Let me say only this: Louis Riel grasped that colonialism in Canada is hostile not only to indigenous peoples and Métis but also to settler farmers and workers. Riel sought to forge an alliance on this basis. But the democratic movements he led in the Prairies were brutally repressed, and with them the hopes of First Nations and Métis.

Indigenous peoples, confined and starved in virtual concentration camps, were subjected to a process of cultural and physical genocide.

Meanwhile, settler farmers fell victim to the railroads, the banks, and agribusiness. Once settled, the Prairies lost population as capitalism drove masses of farmers off their land.

Canada’s racist colonialism has also been expressed internationally. Among countless examples: the rapacious injustice of Canadian corporations, Canada’s support of Israeli apartheid, and in Canada’s present attempt to launch a coup against the democratic government of Venezuela.

During the last half-century, Indigenous peoples have raised their voices, pressed their demands, and gained in confidence and authority. They are once again a powerful presence in social movements and political life. Every progressive people’s movement seeks to link up with indigenous demands and leadership.

In my opinion, we should follow the logic of Glen Coulthard, in his challenging book Red Skin, White Masks. We must do better than the goal of Indigenous “recognition and reconciliation.” Indigenous peoples should enjoy sovereignty, land restitution, reparations for damage done, and full scope to contribute freely to our common human and natural environment.

Let’s work to overturn racist Canadian colonialism and the capitalist social order it created. As a compañero in Venezuela told me a few years back, “Our goal here is to reverse the conquest.”

Indigenous writer Nick Estes says, “Our history is the future”; he quotes African revolutionist Amilcar Cabral: “We must return to the source.”

I see this as a revolutionary return to a society based on pre-conquest principles of solidarity and sharing.

This article was originally published on John Riddell’s blog.