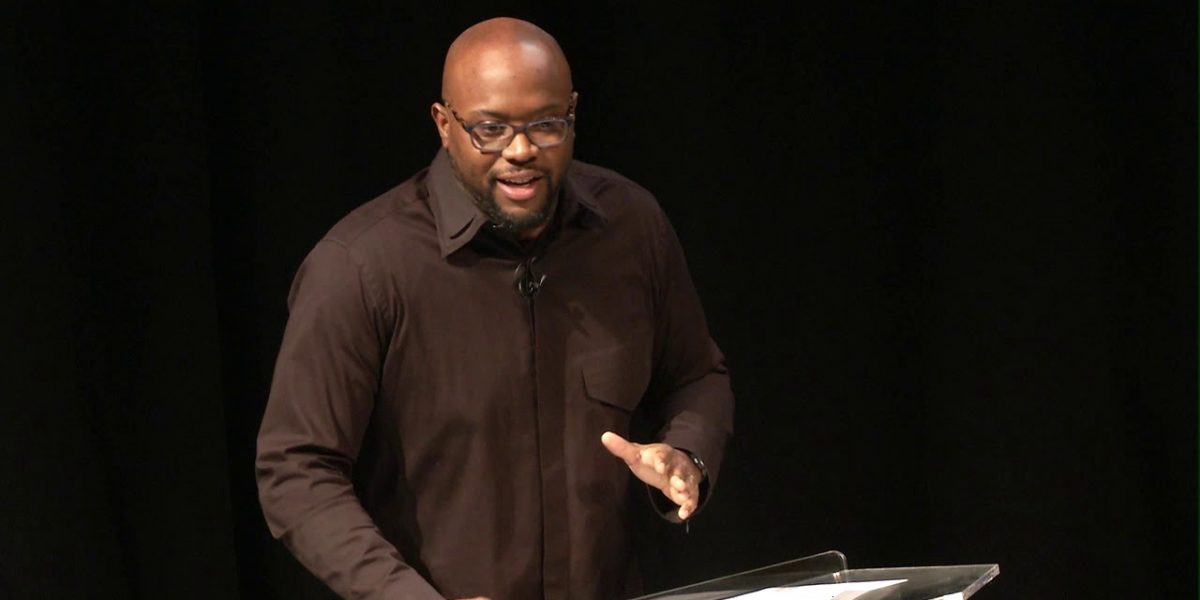 Idris Goodwin is an American playwright, performer, and poet. His work profoundly explores American culture in a way that promotes diversity and equity, while touching on the heart of what it really means to exist in the here and now. Goodwin currently works as the Producing Artistic Director for Stage One Family Theater in Kentucky. His work, Hype Man: a Break Beat Play, won the 2017 Blue Ink Playwriting award and the 2018 Elliot Norton award for Best New Play. He’s been featured on HBO’s Def Poetry, NPR, and his 2011 poetry and essay collection, These are the Breaks, was nominated for the Pushcart award. Goodwin’s latest work, Can I Kick it?, seeks to remix our collective histories and narratives to better understand the nuances of culture in America.

Can I kick it? is a collection of poems about hip-hop, liquids on the airplane, the slam dunk, the grocery checkout line, and really, what living in the America of 2019 is like. The work is based on the oral traditions of both hip-hop and BreakBeat poetry and seeks to bridge the gap between poet and reader. His work is often funny, tongue-in-cheek, as well as challenging. It challenges us to celebrate the people we are, our place in society. It challenges us to look at where we’ve come from, our history, and it challenges us to continue the fight for social justice. When both physical and ideological walls are being drawn, Goodwin’s work asks that we find the commonalities in our experience and seek what unites us and not what divides us. In that tone, Can I kick it?, covers a wealth of topics while always being grounded in Goodwin’s own experience.

One of the central narratives driving Can I kick it? is the idea of time travel in order to document the history of hip-hop in America. The first poem, “Back to the Afro-Future, 1965,” is a play on Back to the Future. The next few pieces are wonderful blends and pastiches of The Temptations, MF Doom, a Tribe Called Quest, and Post Malone. The piece “World of rap” on the sheer diversity in the genre, detailing “Poppy rap, sesame seed rap. Grilled rap. BBQ rap. Cajun rap. Raps with two horns. Raps with one horn aka uni-versial-rap. Rap for the blind. Rap for the deaf aka Deaf Jams. Jelly rap. Nelly rap. Telly rap. Elmo rap. Big Bird rap. Vegan rap. Raps made from vegans. And that’s just Rap. Don’t get me started on hip hop.” There’s a lightheartedness in a lot of Goodwin’s work here, and it makes for a really enjoyable read, as well as providing a platform for deeper thoughts when some of the heavier poems take shape.

One such poem is “Game of Thrones.” This poem starts by addressing the very real television show being created by Game of Thrones TV creators in which the southern states seceded from the Union, birthing a nation where slavery remains legal. Goodwin is right to address these individuals, given the ongoing rise of racist attitudes and right-wing populism in America. There are many consumers who would look at the names attached to the project, look at the idea of a non-existent setting and eagerly explore the minutia of that world. For Goodwin, this world carries all too much weight on the world that we live in today.

The passion and relevance behind Goodwin’s words jump off the page. This is true of every poem from the book, but particularly poignant here. With one stanza citing “So many bad guys fly off on private jet wings / Smash through oil clouds like blood red pitchers of Kool-Aid, / So many bad kings passed out in gold thrones / cradling war spoils from battles they ain’t even fight,” it’s very clear who Goodwin is targeting with his work. Bringing it back to the opening of the book, the aspects of time’s ineffable quality to seem both progressive and regressive are at play in many of his poem’s. They’re presented in a way that’s easily accessible, but convey enormous depth and importance. This is Goodwin’s true skill as an artist.

Class, race, and culture are all an immutable part of Can I Kick it? It offers keen insights into the highly political, and the highly mundane. Goodwin presents a work that is as complex and multifaceted as the topics he writes.

Can I Kick it? is set for publication through Haymarket Books on October 1st, 2019. More info on Idris Goodwin as well as presentations, plays, and performances can be found on his website.