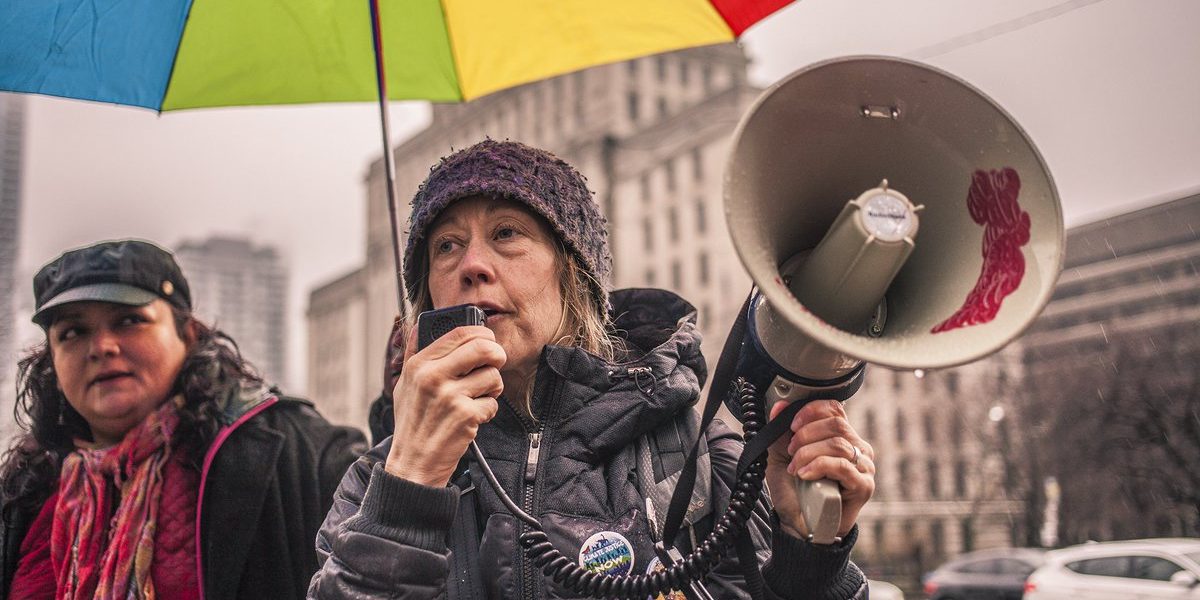 Almost everyone says they oppose war in principle, but few are willing to face the opprobrium that comes with confronting militarist nationalism.

A week ago one of Canada’s leading antiwar activists protested Canada’s contribution to the US/NATO proxy war with Russia. Tamara Lorincz interrupted a talk by Defence Minister Anita Anand with a sign reading:

Peace in Ukraine. Peace with Russia.”

A Reuters reporter watching the live feed of the event from Washington DC reported on the sign and disruption. Toronto Star columnist Martin Regg Cohn, who moderated the talk, also wrote about it and the disruption has been viewed over 100,000 times on Twitter.

While the action highlights the effectiveness of interrupting politicians, the backlash has also been harsh. Hundreds criticized the disruption on Twitter. One of Canada’s most influential commentators, Andrew Coyne, quote tweeted the video stating, “Pacifists are the objective allies of fascists, Pt. XCVIII”. In response to Coyne NDP MP Charlie Angus noted, “I have a deep respect for pacifists. Those promoting the so-called ‘peace’ option in the Ukraine war however, give off the odious whiff of being complicit in spreading the Putin or the Chinese state agenda.”

Not only an ally of fascists and Putin, Lorincz is also an agent of the “Chinese state agenda.”

Angus is a staunch proponent of the US/Canada/NATO proxy war. In the House of Commons on October 17 he accused the new premier of Alberta, Danielle Smith, of “promoting Russian, pro-Putin propaganda” because she previously suggested there was a greater chance of peace if Ukraine remained “neutral.” Angus has also forthrightly opposed negotiations to end the fighting. Asked on Twitter in May, “Do you agree that what is needed concerning Russia/Ukraine war is negotiations not more weapons?” Angus responded, “we will negotiate when Putin pulls his war machine out of Ukraine and the international war crimes unit is allowed to fully investigate his crimes.” (While they trend in different directions, one can support sending weapons and seeking to negotiate.)

Angus and Coyne’s outburst reflects a long history of demonizing antiwar voices. NDP leader Jack Layton was dubbed “Taliban Jack” for calling on the government to negotiate with the Taliban during the war in Afghanistan. During that war 16 University of Regina professors sent a letter to the school’s president saying it should withdraw from an initiative offering free tuition to the children of dead soldiers. Project Hero was created by retired Chief of the Defence Staff Rick Hillier who infamously declared “we’re not the public service of Canada … We are the Canadian Forces, and our job is to be able to kill people.” The letter noted that Project Hero is “a glorification of Canadian imperialism in Afghanistan and elsewhere.” The political and media backlash was ferocious. Saskatchewan Premier Brad Wall condemned the letter and Regina-Qu’Appelle MP Andrew Scheer said the professors’ actions were “disgusting”.

During the Korean war Canadian Peace Congress chairman James Endicott was bitterly denounced. External minister Lester Pearson called Endicott, who had been a college friend, a “red stooge” and the “bait on the end of a Red hook.” Pearson even called for individuals to destroy the Peace Congress from the inside. The external minister publicly applauded 50 engineering students who swamped a membership meeting of the University of Toronto Peace Congress branch. He proclaimed, “if more Canadians were to show something of this high-spirited crusading zeal, we would very soon hear little of the Canadian Peace Congress and its works. We would simply take it over.” Government attacks spurred media and public hostility. A number of public venues refused to rent their space to the Peace Congress and Endicott’s Toronto home was firebombed during a large Peace Congress meeting.

During World War II hundreds of dissidents and communists were sent to internment camps including the president of the Canadian Seamen’s Union Pat Sullivan and the Mayor Camillien Houde of Montréal. Houde was interned (without trial) for four years because he called on Quebec men to ignore the national registration measure introduced by Ottawa.

During World War I veterans attacked union officials in Vancouver opposed to conscription. Angry about their criticism of Canada’s invasion of Russia, veterans also sacked the Socialist Party headquarters in Winnipeg, destroying a piano and educational materials. Labour organizer Ginger Goodwin was killed on Vancouver Island for opposing the war. In spring 1918 opponents of the Military Service Act were gunned down in Québec. In late March 1918 anti-conscription protests erupted in Québec City after some French speakers were arrested for not carrying their conscription exemption cards. Martial law was proclaimed and over a thousand English-speaking soldiers were deployed to maintain order and enforce conscription. At least four were killed and dozens injured when soldiers opened fire on protesters.

One could argue things are better today but challenging the “conservative animus” unleashed by war remains difficult. You have to be willing to face the scorn of militarist nationalists.