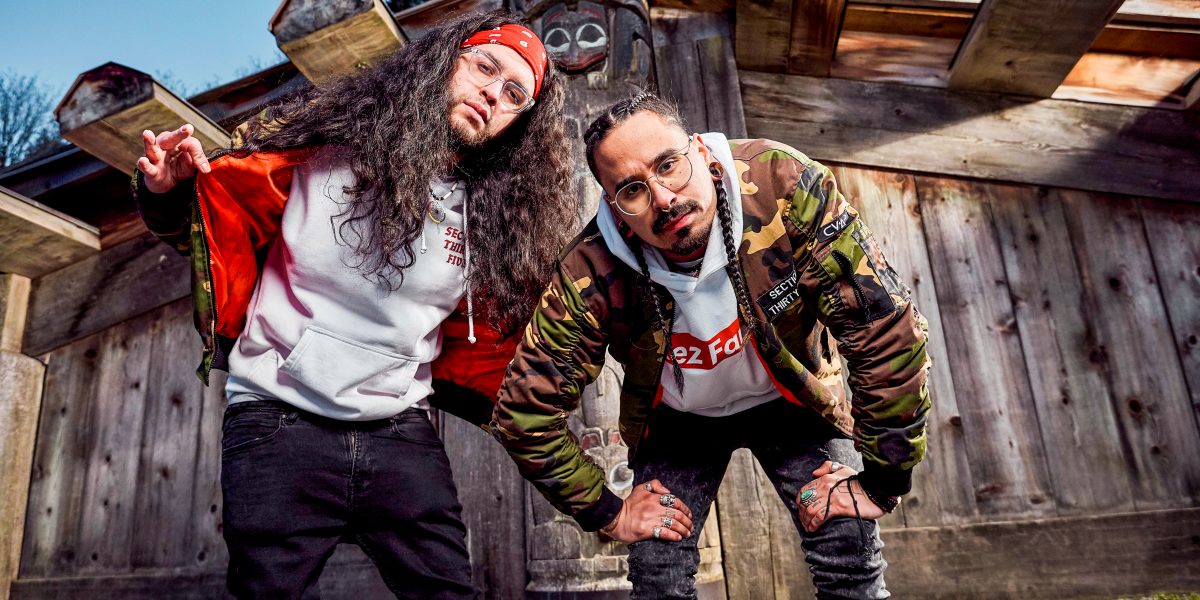 “The Culture of the Haisla is built on respect. Respect for the land, the air, the water, the animals and each other… The Wa’wais is a track of land, today it’s known as a trapline. That Wa’wais is owned by a clan member. Wa’wais boundaries are from sea to the mountaintops. The Wa’wais will be protected for future generations. We own only the responsibility to protect the land, the sea and the air, and all that live within it, for future generations…”

These are the opening lines from Trapline, the latest album by Haisla hip-hop duo, Snotty Nose Rez Kids. The opening remarks build into “Rebirth,” featuring Inuk throatsinger, Tanya Tagaq. The track’s refrain, “resist, revive, indigenize,” serves as a powerful thesis for the whole album. Each and every song on here is celebration of decolonial resistance and cultural heritage. The album is not only a heavy hitter in terms of content, but the emotional weight of each track permeates through every verse and the album’s production is fantastic.

The group, releasing their first album in 2017, has gained national and international attention in a relatively short amount of time, being shortlisted for the 2018 Polaris Music Prize and the 2019 Juno awards. SNRK roots their hip-hop with contemporary styles, meaning a decent emphasis on trap, high hats, and heavy use of triplicate vocal delivery. There is some variation in style over the album’s 18 tracks, with the staccato style often giving way to highlight the emotional push of the song. The group is also wise with their use of featured artists, emphasizing those who present conscious, political and positive music, such as Toronto’s The Sorority, Calgary’s Cartel Madras , and Vancouver’s Kimmortal.

Each track on here honestly deserves its own article. SNRK have a gift for fusing together political fury with clever twists and tongue-in-cheek references. Given that the Haisla territory is centered around Kitimat, currently the spot for the proposed LNG Canada terminal, SNRK target corporate greed as well as racist ideologies and the Canadian state while celebrating their own history. Some are pure shots of fire and anger while others are more celebratory, but every track is a hit. It’s a tough choice to pick just a few to highlight, but some standouts are “Son of a Matriarch,” “I Can’t Remember my Name,” and “Savage Mob.”

In an interview with A.Side, SNRK discuss “Son of a Matriarch” as it relates to the role of women in their culture. “We come from a matriarchal society where our matriarchs hold the power and our clans are held and passed down from our mothers. SOAM is our way of paying homage to the powerful women who raised us to be the men we are today.” The track is a pounding rallying call against misogyny and features prominent calls for equality: “Don’t play the victim / dismantle the system / don’t drag your feet / that don’t work with our sisters,” they chant in one verse, with a repeated chorus of “Son of a / Son of a matriarch / son of a / F–k all that patriarch.” It’s a song with a positive beat and message, but the anger at the system seems to boil under each and every breath and verse.

The title “I Can’t Remember my Name,” might give you the impression of the group being lost and losing touch with their culture, and while the earlier parts of the track allude to this theme, it is a grounded effort that celebrates their roots and staying true to who they are. The middle of the second verse really shouts this out:

The song musically captures this spirit very well, using a dizzying chord progression that seems to rise and fall, before becoming grounded for the bridge in order to emphasize the group’s message.

The track “Savage Mob” was inspired from an experience  the group had while performing in Australia and collaborating with Indigenous artists. BIrdz and Nooky, the two artists featured on the track “welcomed us with open arms, introduced us to their people, showed us their lands, and shared a bit of their history with us. This is global shit, Savage Mob is the Indigenous resurgence!” The track stays true to this theme with a chorus that bangs like a chaotic party anthem. There’s also a nice twist on Pink Floyd’s classic under a new coat of paint with “We don’t need your education / We don’t need your thought control / Priest don’t kill my tribe /  Leave those kids alone.”

SNRK are required listening for anyone interested in progressive music. Their music encapsulates the past and ongoing Canadian colonial genocide against Indigenous communities. It also perfectly captures the spirit of “resist, revive, indigenize,” as sung in the opening track. Supporting artists like SNRK and promoting their music is certainly a step in pushing for these goals, but there is work we can do together to push them even further.

We must support Indigenous sovereignty on all levels. While the Green New Deal does help to address climate change while also pushing for equitable labour practices, we must make sure that Indigenous voices are at the front of these discussions. Green New Deal townhalls and other events have been sprouting up all over Canada, and while Indigenous sovereignty is heavily promoted as something we need to include, these voices have been under-represented in the ongoing discussions. Allies can help promote and make space for Indigenous voices in the movement, while also understanding how central this task is for settlers operating in Canada.

We must also understand how key Indigenous leadership is if we want to stop both the Transmountain and Coastal GasLink pipelines in BC. Support for the Unist’ot’en Camp and groups like Tiny House Warriors must be central in our ongoing climate and social justice work, and artists like SNRK can help centre Indigenous voices and decolonization in these movements.

For more information, including tickets for the upcoming Trapline tour, visit snottynoserezkids.com