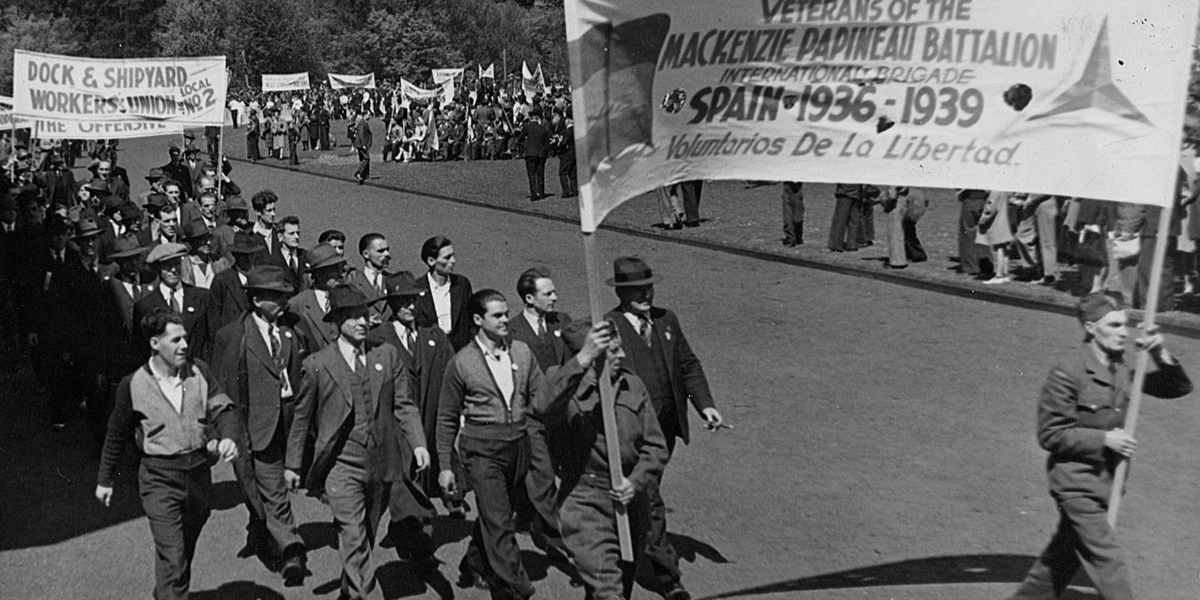 To mark this year’s Remembrance Day, it is fitting to honour the volunteers who demonstrated working class solidarity by fighting fascism in the Spanish Civil War.

1,500 Canadian volunteers answered the Spanish government’s call for help in resisting General Franco coup. These Canadian volunteers to the International Brigades were organized in the Mackenzie Papineau Battalion named after William Lyon Mackenzie and Louis-Joseph Papineau. The MacPap volunteers crossed the ocean to fight in a foreign war out of the belief that no one is free until everyone is free.

The Spanish Civil War, which ravaged the country between 1936 and 1939, started as an attempted military coup by conservative forces known as The Nationalists. When they failed to seize control of the country in July 1936, a wider war broke out. The Nationalists primarily represented landowners, businessmen, key members of the military, fascist parties and the Catholic Church received support from Nazi Germany and Italy’s fascist government.

The Republicans represented the urban working class, agricultural labourers, and much of the middle class. Communist, anarchists, socialist factions were also found on the Republicans side.

The civil war did not break out overnight. Decades of increased polarization within Spanish society, the violent suppression of a labour uprising under the command of General Francisco Franco, governmental instability, and the election of the left-wing, socialist-led Popular Front government in February of 1936, led the right to attempt a military coup.

Both sides received help from abroad. The Republicans received substantial aid from the Mexican government and the Soviet Union. More than 35,000 volunteers arrived from 52 countries to fight against Franco and demonstrate solidarity with the working class. Many were communists and migrants who had been displaced by fascism, while others were allies.

Among these were the members of the MacPap battalion. This Canadian battalion was formed in the spring of 1937. Previously, Canadian volunteers mainly served in American or International battalions. Even after its formation, many Americans served in the MacPap battalion. Many Eastern European Canadian volunteers served in Slavic battalions and other Canadians were found in medical units or artillery batteries. The battalion fought in five major campaigns. Between 400 and 750 Canadians were killed and many others were injured.

At the time, Canada was in the midst of the Great Depression, during which single, homeless men were denied government aid and left with no choice but to live in unemployment relief camps. Many of the volunteers who travelled to Spain were living in these relief camps with few prospects. A good number were recent immigrants and affiliated with the Communist Party of Canada.

The leaders who formed the MacPap battalion held openly communist values. Edward Cecil-Smith, a labour journalist from Toronto and military leader, led the battalion alongside Saul Wellman, a New York union organizer. Dr. Norman Bethune, a surgeon who formed a blood transfusion unit, a significant innovation at the time, also belonged to the Communist party.

The involvement of the MacPap battalion was not sanctioned by the Canadian state, which was taking an isolationist stance. In 1937, the Canadian government passed a law forbidding Canadians from fighting in foreign wars. The MacPap battalion received no official recognition when the survivors returned to Canada and was largely considered an embarrassment until the 1970s, when interest in the battalion revived.

Patriotic glory is usually reserved for those who fought and died for the state. The members of the MacPap battalion did not fight for king or country, they were motivated by higher ideals. The Mac-Paps volunteers took on fascism, when our government and business class coddled it, because they believed that international working class solidarity was key to the liberation of humanity.