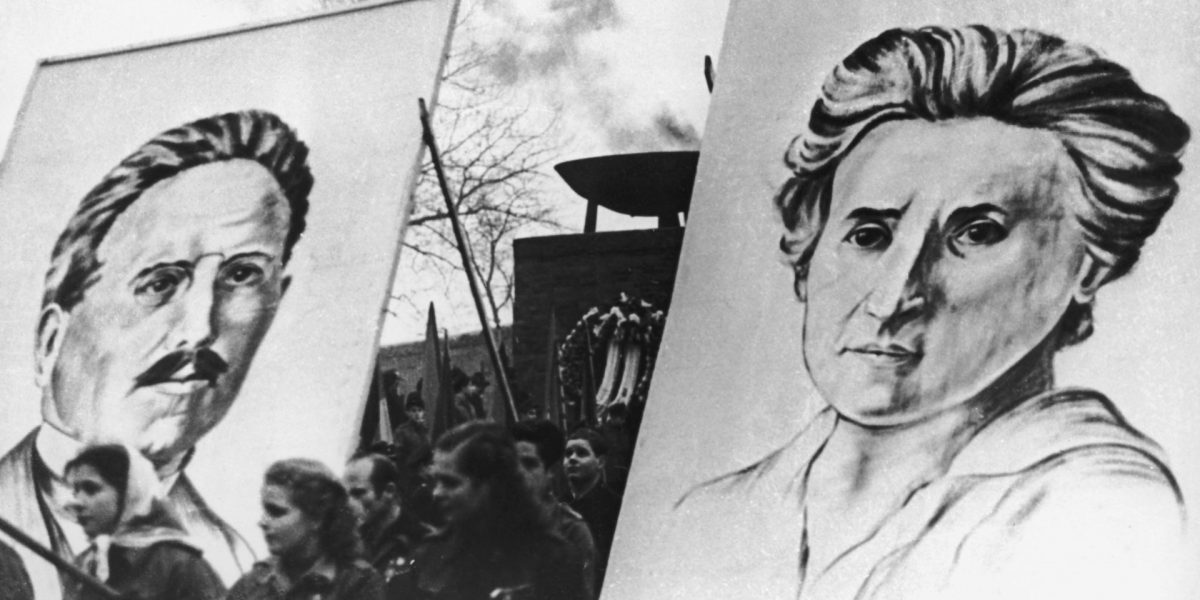 101 years ago today the Polish socialist Rosa Luxemburg penned her last piece of writing “Order Prevails in Berlin“. The piece was written in the midst of a failed workers’ uprising in Berlin led by the newly formed Communist Party of Germany. Rosa and Karl Liebknecht, both leading members of of the Communist Party, were captured, tortured and executed by the the ‘Freikorps’ (“Free Corps”), a private militia, at the behest of the government headed by the Social Democratic Party on January 15. They were among thousands of militants systematically killed.

“Order prevails in Warsaw!” declared Minister Sebastiani to the Paris Chamber of Deputies in 1831, when after having stormed the suburb of Praga, Paskevich’s marauding troops invaded the Polish capital to begin their butchery of the rebels.

“Order prevails in Berlin!” So proclaims the bourgeois press triumphantly, so proclaim Ebert and Noske, and the officers of the “victorious troops,” who are being cheered by the petty-bourgeois mob in Berlin waving handkerchiefs and shouting “Hurrah!” The glory and honor of German arms have been vindicated before world history. Those who were routed in Flanders and the Argonne have restored their reputation with a brilliant victory – over three hundred “Spartacists” in the Vorwärts building. The days when glorious German troops first crossed into Belgium, and the days of General von Emmich, the conqueror of Liege, pale before the exploits of Reinhardt and Co. in the streets of Berlin. The government’s rampaging troops massacred the mediators who had tried to negotiate the surrender of the Vorwärts building, using their rifle butts to beat them beyond recognition. Prisoners who were lined up against the wall and butchered so violently that skull and brain tissue splattered everywhere. In the sight of glorious deeds such as those, who would remember the ignominious defeat at the hands of the French, British, and Americans? Now “Spartacus” is the enemy, Berlin is the place where our officers can savor triumph, and Noske, “the worker,” is the general who can lead victories where Ludendorff failed.

Who is not reminded of that drunken celebration by the “law and order” mob in Paris, that Bacchanal of the bourgeoisie celebrated over the corpses of the Communards? That same bourgeoisie who had just shamefully capitulated to the Prussians and abandoned the capital to the invading enemy, taking to their heels like abject cowards. Oh, how the manly courage of those darling sons of the bourgeoisie, of the “golden youth,” and of the officer corps flared back to life against the poorly armed, starving Parisian proletariat and their defenseless women and children. How these courageous sons of Mars, who had buckled before the foreign enemy, raged with bestial cruelty against defenseless people, prisoners, and the fallen.

“Order prevails in Warsaw!” “Order prevails in Paris!” “Order prevails in Berlin!” Every half-century that is what the bulletins from the guardians of “order” proclaim from one center of the world-historic struggle to the next. And the jubilant “victors” fail to notice that any “order” that needs to be regularly maintained through bloody slaughter heads inexorably toward its historic destiny; its own demise.

What was this recent “Spartacus week” in Berlin? What has it brought? What does it teach us? While we are still in the midst of battle, while the counterrevolution is still howling about their victory, revolutionary proletarians must take stock of what happened and measure the events and their results against the great yardstick of history. The revolution has no time to lose, it continues to rush headlong over still-open graves, past “victories” and “defeats,” toward its great goal. The first duty of fighters for international socialism is to consciously follow the revolution’s principles and its path.

The countryside, from which a large percentage of rank-and-file soldiers come, has hardly been touched by the revolution. So far, Berlin has remained virtually isolated from the rest of the country. The revolutionary centers in the provinces – the Rhineland, the northern coast, Brunswick, Saxony, Württemburg – have been heart and soul behind the Berlin workers, it is true. But for the time being they still do not march forward in lockstep with one another, there is still no unity of action, which would make the forward thrust and fighting will of the Berlin working class incomparably more effective. Furthermore, there is – and this is only the deeper cause of the political immaturity of the revolution – the economic struggle, the actual volcanic font that feeds the revolution, is only in its initial stage. And that is the underlying reason why the revolutionary class struggle, is in its infancy.

From all this that flows the fact a decisive, lasting victory could not be counted upon at this moment. Does that mean that the past week’s struggle was an “error”? The answer is yes if we were talking about a premeditated “raid” or “putsch.” But what triggered this week of combat? As in all previous cases, such as December 6 and December 24, it was a brutal provocation by the government. Like the bloodbath against defenseless demonstrators in Chausseestrasse, like the butchery of the sailors, this time the assault on the Berlin police headquarters was the cause of all the events that followed. The revolution does not develop evenly of its own volition, in a clear field of battle, according to a cunning plan devised by clever “strategists.”

The revolution’s enemies can also take the initiative, and indeed as a rule they exercise it more frequently than does the revolution. Faced with the brazen provocation by Ebert-Scheidemann, the revolutionary workers were forced to take up arms. Indeed, the honor of the revolution depended upon repelling the attack immediately, with full force in order to prevent the counter-revolution from being encouraged to press forward, and lest the revolutionary ranks of the proletariat and the moral credit of the German revolution in the International be shaken.

The immediate and spontaneous outpouring of resistance from the Berlin masses flowed with such energy and determination that in the first round the moral victory was won by the “streets.”

Now, it is one of the fundamental, inner laws of revolution that it never stands still, it never becomes passive or docile at any stage, once the first step has been taken. The best defense is a strong blow. This is the elementary rule of any fight but it is especially true at each and every stage of the revolution. It is a demonstration of the healthy instinct and fresh inner strength of the Berlin proletariat that it was not appeased by the reinstatement of Eichorn (which it had demanded), rather the proletariat spontaneously occupied the command posts of the counter-revolution: the bourgeois press, the semi-official press agency, the Vorwärts office. All these measures were a result of the masses’ instinctive realization that, for its part, the counter-revolution would not accept defeat but would carry on with a general demonstration of its strength.

Here again we stand before one of the great historical laws of the revolution against which are smashed to pieces all the sophistry and arrogance of the petty USPD variety “revolutionaries” who look for any pretext to retreat from struggle. As soon as the fundamental problem of the revolution has been clearly posed – and in this revolution it is the overthrow of the Ebert-Scheidemann government, the primary obstacle to the victory of socialism – then this basic problem will rise again and again in its entirety. With the inevitability of a natural law, every individual chapter in the struggle will unveil this problem to its full extent regardless of how unprepared the revolution is ready to solve it or how unripe the situation may be. “Down with Ebert-Scheidemann!” – this slogan springs forth inevitably in each revolutionary crisis as the only formula summing up all partial struggles. Thus automatically, by its own internal, objective logic, bringing each episode in the struggle to a boil, whether one wants it to or not.

Because of the contradiction in the early stages of the revolutionary process between the task being sharply posed and the absence of any preconditions to resolve it, individual battles of the revolution end in formal defeat. But revolution is the only form of “war” – and this is another peculiar law of history – in which the ultimate victory can be prepared only by a series of “defeats.”

What does the entire history of socialism and of all modern revolutions show us? The first spark of class struggle in Europe, the revolt of the silk weavers in Lyon in 1831, ended with a heavy defeat; the Chartist movement in Britain ended in defeat; the uprising of the Parisian proletariat in the June days of 1848 ended with a crushing defeat; and the Paris commune ended with a terrible defeat. The whole road of socialism – so far as revolutionary struggles are concerned – is paved with nothing but thunderous defeats. Yet, at the same time, history marches inexorably, step by step, toward final victory! Where would we be today without those “defeats,” from which we draw historical experience, understanding, power and idealism? Today, as we advance into the final battle of the proletarian class war, we stand on the foundation of those very defeats; and we can do without any of them, because each one contributes to our strength and understanding.

The revolutionary struggle is the very antithesis of the parliamentary struggle. In Germany, for four decades we had nothing but parliamentary “victories.” We practically walked from victory to victory. And when faced with the great historical test of August 4, 1914, the result was the devastating political and moral defeat, an outrageous debacle and rot without parallel. To date, revolutions have given us nothing but defeats. Yet these unavoidable defeats pile up guarantee upon guarantee of the future final victory.

There is but one condition. The question of why each defeat occurred must be answered. Did it occur because the forward-storming combative energy of the masses collided with the barrier of unripe historical conditions, or was it that indecision, vacillation, and internal frailty crippled the revolutionary impulse itself?

Classic examples of both cases are the February revolution in France on the one hand and the March revolution in Germany on the other. The courage of the Parisian proletariat in the year 1848 has become a fountain of energy for the class struggle of the entire international proletariat. The deplorable events of the German March revolution of the same year have weighed down the whole development of modern Germany like a ball and chain. In the particular history of official German Social Democracy, they have reverberated right up into the most recent developments in the German revolution and on into the dramatic crisis we have just experienced.

How does the defeat of “Spartacus week” appear in the light of the above historical question? Was it a case of raging, uncontrollable revolutionary energy colliding with an insufficiently ripe situation, or was it a case of weak and indecisive action?

Both! The crisis had a dual nature. The contradiction between the powerful, decisive, aggressive offensive of the Berlin masses on the one hand and the indecisive, half-hearted vacillation of the Berlin leadership on the other is the mark of this latest episode. The leadership failed. But a new leadership can and must be created by the masses and from the masses. The masses are the crucial factor. They are the rock on which the ultimate victory of the revolution will be built. The masses were up to the challenge, and out of this “defeat” they have forged a link in the chain of historic defeats, which is the pride and strength of international socialism. That is why future victories will spring from this “defeat.”

“Order prevails in Berlin!” You foolish lackeys! Your “order” is built on sand. Tomorrow the revolution will “rise up again, clashing its weapons,” and to your horror it will proclaim with trumpets blazing: