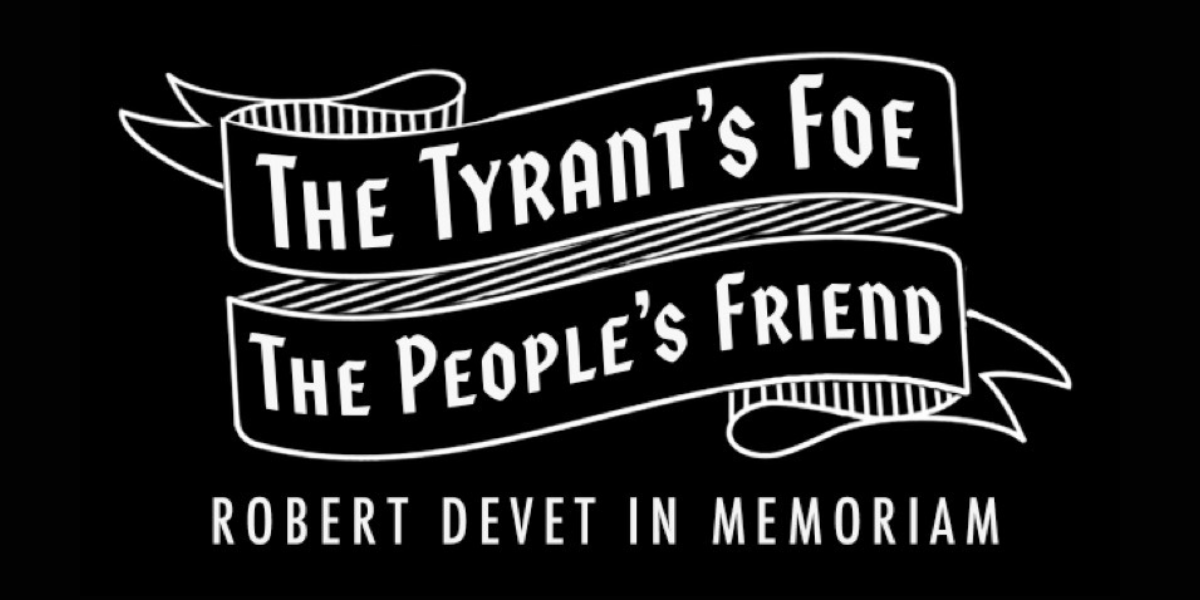 Hundreds gathered outside the former Halifax Memorial Library building on Spring Garden Road in Kjipuktuk/Halifax on Thursday, October 14 to commemorate and celebrate the life of longtime local social movement journalist Robert Devet, who was the publisher and editor of the Nova Scotia Advocate.

Devet passed away suddenly and unexpectedly on September 27 at the age of 66.

Robert Devet began a “new career” as an unpaid volunteer journalist for the Halifax Media Co-op in September 2012, very soon after retiring from a long career as a provincial civil servant in Nova Scotia, and later went on to launch the Nova Scotia Advocate as a new publication, covering a broad spectrum of social movement struggles in Halifax and across Nova Scotia.

In his role as a journalist, Robert soon became the one consistent thread that ran between many different and diverse social movements and struggles that often otherwise operate in silos and without much regular contact with each other. Whether it was covering labour union struggles and picket lines, other fights for economic justice (and in particular low-waged and precarious workers), affordable housing, Indigenous sovereignty, anti-poverty struggles, anti-racism and racial justice issues, disability and inclusion campaigns, environmental and climate justice, prison justice, justice for refugees and immigrants, migrant justice, LGBTQ+ liberation, human rights advocacy, or other progressive issues for social change, Robert could be found at every rally, protest, demonstration, picket line, community meeting or other event in Halifax to write and report on the issue at hand.

At all of these protests, rallies and demonstrations, Robert could be spotted easily with his trademark fedora hat, a camera slung around his neck, and a pen and paper in hand as he interviewed participants for the Nova Scotia Advocate, very often encouraging them to consider putting their own thoughts and ideas into print for his publication.

Of the many actions and picket lines that Robert covered as a journalist, the most lengthy was the 566 day long strike by unionized journalists and editors at The Chronicle Herald. Robert walked the picket lines alongside the striking journalists almost every day throughout the lengthy strike, and is fondly remembered by current and former members of the Halifax Typographical Union (HTU / CWA Canada). Robert filed reports from the picket lines and actions of the Herald strikers several times a week, and at a point when many striking journalists were feeling the economic pinch of having their income vastly reduced to only strike pay, he offered the to the striking Herald workers and their union the opportunity to submit freelance articles to the Nova Scotia Advocate for pay to supplement their picket pay.

Former Herald striker Sheri Borden Colley noted that throughout that nearly nineteen month long  strike of newsroom staff, “Robert supported us in many ways by visiting us often on the picket line, leaving numerous gift cards, bringing coffee and snacks, offering moral support, and writing about the labour dispute itself.”

A voice for the voiceless

Robert gave voice to people and movements that were otherwise left voiceless. He worked tirelessly as both a journalist and an editor, patiently working with new authors to help them strengthen their writing so that their own voices and the voices of the struggles they were part of could be amplified. He spent countless hours nurturing and mentoring less experienced writers in order to ensure they were able to express themselves and be heard, and feel proud of the work that was published.

In many ways, Robert was an anomaly that isn’t likely to be replicated, or replaced in any way, in the type of journalism he did or in the way that he edited and published the Nova Scotia Advocate. He worked many dozens of hours each week without giving himself a paycheque, and funded the whole operation, including paying freelance journalists reasonable rates for articles, through modest donations and at least partly out of his own pocket.

As Robert’s son Simon De Vet (who styles his surname differently than his father) noted, the Nova Scotia Advocate “was a labour of love” for Robert, “but it was labour”.

“He put an enormous amount of time and effort into maintaining the site. The Advocate is less than six years old, but in this time he published thousands of articles (and poems, and cartoons) by dozens of writers. Like my father, most of these writers were not trained journalists. He provided support and mentorship to everyone he worked with,” said Simon.

Simon writes that his father Robert “often wrote about people who had been victimized, and made sure that they would not be further harmed by the publication of their stories. He was never neutral, and would proudly hold signs and chant at the rallies he attended. He was very generous with both his readers (making sure that all articles were free to everyone) and with his contributors (who were often paid above the standard rates).”

100 percent of reader donations, minus a small amount for website hosting expenses, were used exclusively to pay freelance contributors.

As Carolyn van Gurp, Robert’s sister-in-law, has pointed out, it is no surprise that Robert threw his full energies into reporting on these movements.

“100 years ago on another continent in another context Robert’s grandfather was also fighting for justice and actively pursuing his ideals. A family physician, he championed the rights of women to have control over reproduction. An idealistic socialist, he decided to join the revolution and moved his young family to the then-new Soviet Union. Eventually disillusioned by and speaking out against political corruption, he had to flee with his family in the middle of the night back to Holland. Robert’s parents were both active in the anti-Nazi Dutch resistance and his father was an expert forger of documents used to get Jews to safety.” van Gurp said in a post remembering Robert.

Robert’s sister, Hélène de Vet, noted that “in his teens, Robert got involved with all kinds of progressive activities like those against the South African apartheid regime and the American invasion of Vietnam. He also turned into a great admirer of underground music (Frank Zappa, Leonard Cohen, etc) and was often to be found at Paradiso (Amsterdam), where all those sensational international bands performed.”

“In the somewhat boring village of Baarn, Robert’s actions drew attention after he spread some political pamphlets and hung a poster of the Dutch Communist Party in his bedroom window. Baarns’ police, and even the national secret service (BVD), showed a particular interest in him, sometimes more, and sometimes less visibly.” Hélène noted.

Robert immigrated to Canada from Holland at an early age, after meeting and falling in love with his late wife Maria van Gurp while she was in Amsterdam. After emigrating to Nova Scotia from Holland, Robert soon began work as a civil servant for the Nova Scotia government, but, as Carolyn van Gurp notes, “followed a path started by his grandfather who lived his social justice ideals in dramatic ways; a path his own parents followed in actively resisting Nazi oppression.”

Nova Scotia New Democratic Party (NS NDP) leader Gary Burrill, who himself was the editor in the 1980’s of New Maritimes, a radical magazine of regional politics and culture, said that he admired and looked up to Robert and his work a great deal. Burrill described Robert as a “marvelous representative of a tradition of journalism that is extremely important, and especially important to progressive people and people on the Left, a kind of journalism that is partisan — not in the sense of political parties, but partisan in the sense that it knows which side it is on, and whose side it is on.”

Burrill has said of Robert’s work that it stands up well amidst a long history and journalistic tradition in Nova Scotia that dates back a century, including publications such as those that came out of industrial Cape Breton and the work of coal miner and Mineworkers Union leader James Bryson (“J.B.”) McLachlan, who launched and edited the Maritime Labour Herald in 1921, and later the Nova Scotia Miner.

The “Remembering Robert Devet: The Tyrant’s Foe, The People’s Friend” celebration of life event in Halifax brought together several hundred activists and organizers from countless movements for a better world, alongside members of Robert’s family and others who admired him and his work for many years. Speakers included Indigenous sovereignty activists, leaders within the Black / Afro-Nova Scotian community, womens’ movement leaders, trade unionists, immigrants, academics, and many more, while larger-than-life images of Robert filled the front of the old Halifax Memorial Library site, thanks to the efforts of the Nocturne: At Night festival’s technical projection staff and equipment.

El Jones, who led the organizing efforts for the celebration of life event for Robert and moderated the memorial event, said that Robert “always marched and moved in solidarity with people, and always understood his responsibility on these (Mi’kma’ki) lands, and made sure that he lived that out in his life”.

This legacy of Robert, and his role as a vital link between disparate and sometimes otherwise-disconnected social movements, will be difficult to continue. The city of Halifax, and the province of Nova Scotia in general, has been materially diminished in a meaningful and material way by Robert’s sudden passing. But perhaps, in Robert’s memory, we can find ways to step out of the “silos” of our movements and activism and find new ways, and new threads, to connect all struggles for justice and a better world in Halifax and beyond.

There is a “Sharing Memories of Robert Devet” facebook page where family, friends, folks who knew Robert or simply admired his work from afar are sharing photographs, memories, thoughts and recollections about Robert and his legacy.