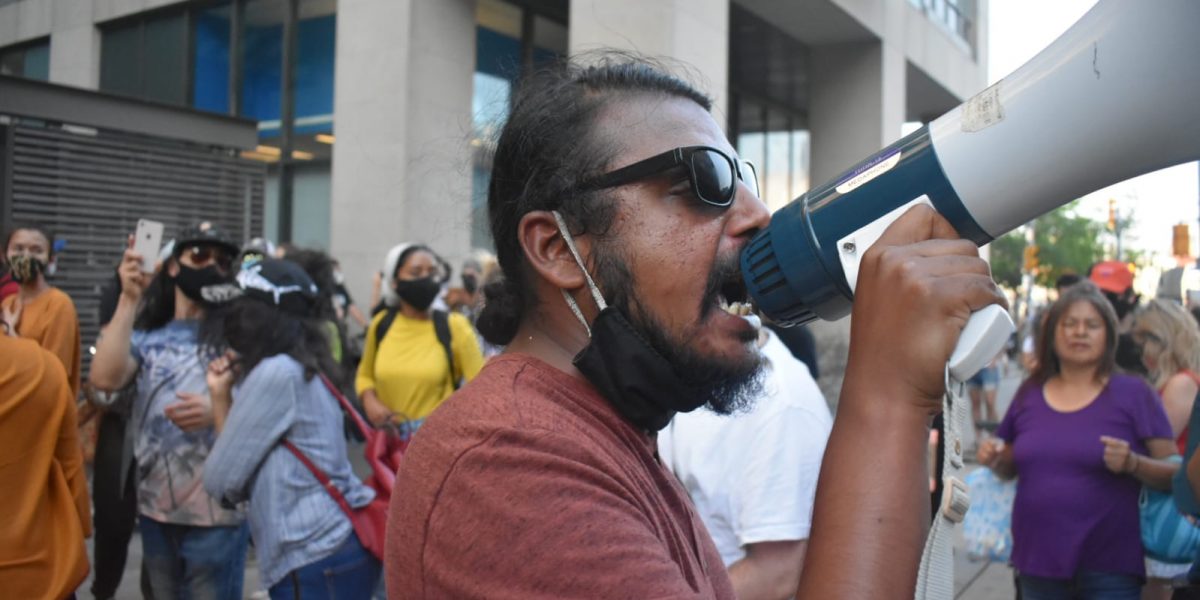 Hundreds of tenants across Toronto gathered in Queen’s Park for a rally to protest Bill 184, the Protecting Tenants and Strengthening Community Housing Act. The rally was organized by housing justice organizers from Parkdale Organize and Peoples’ Defence Toronto. Bill 184 aims to increase the power of landlords to evict and collect unpaid rent from current and past tenants. The proposed legislation is now before a legislative committee and is supported by both the Liberals and Conservatives.

No money, no rent

Tenants across Toronto launched a rent strike four months ago when the economy was shut down because of the COVID-19 pandemic. From the beginning of the crisis, housing justice organizers have said that no reasonable negotiation could take place between tenants and landlords when tenants could potentially face eviction. Tenants insisted that a rent strike was necessary because the federal government’s CERB payments could barely cover one month’s worth of rent for a small one-bedroom apartment in Toronto.

Humna from Peoples’ Defence Toronto grew up in Scarborough’s Crescent Town, a low-income racialized community. She told the rally,

“Our people are displaced from back home and they come to this country because they are forced to move. They do work in this country that breaks their backs. But we’ve displaced once and now we’re being displaced twice as Ford and Tory push forward legislation to expedite mass evictions. But we are rising and uncles and aunties that I grew up around are demanding justice—we are smashing the model minority myth in this country. Our homes are not up for grabs and if you test us you must be ready to face the consequences. ”

Bill 184, if passed, will apply retroactively to when the province first declared a state of emergency over the pandemic. Housing justice organizers point out that although Doug Ford insisted that not one person would be evicted for not paying their rent during the pandemic, Bill 184 is designed as a punitive action against tenants who participated in rent strikes.

Humna reminded the crowd that racialized neighbourhoods where essential workers are stuck in tiny living spaces are hit the hardest by COVID-19 while wealthy, majority-white communities, have seen the fewest cases of the virus. “We might be outsourced, but we are not outnumbered,” said Humna.

Tenants marched from Queen’s Park through the streets of Toronto chanting, “Come for us, we’ll come for you, that is what good neighbours do,” and “Whose city? Our City.” Tenants held the intersection at Queen’s Park and Bloor for 20 minutes before proceeding to the residence of John Tory at One Bedford. Police blocked the entrance of the building as hundreds of tenants tried to enter the building and hand him an eviction notice. On March 23, John Tory held a closed-door meeting with landlords and subsequently voted against a city motion on June 30th that called upon the provincial government to assist tenants.

The tenants decided to plaster the eviction notice on the lobby window of John Tory’s residence while chanting “tenants don’t have rent to pay, now we know where you live” and “John Tory come outside, John Tory you can’t hide.”

Mimicking the language of the Landlord and Tenant Board, Ashleih, an organizer from Parkdale Organize, read the legal notice out loud and told the crowd, “John Tory, your behaviour has caused serious harm and danger to the tenants of Toronto. Your behaviour allows the mass eviction of thousands of people across Toronto. We have delivered this notice, taped on the window of One Bedford Road.”

Another organizer from Peoples Defence Toronto told the crowd:

“Toronto Police should not enforce one eviction. The plan for the Toronto City Lab might be closed, but the vision of the rich is clear. This city is made of Black, Brown, and working-class people. Life in this city is hell for our class. The one thing that makes life in this city bearable is our neighbourhoods. We have numbers and we have culture. Politics is not begging for reform. It’s where we come up with strategies and solutions together and this is nothing less than war. Our neighbourhoods are the terrain where the fight will happen. Not one police officer should enforce an eviction.”

As tenants held the line and began to push back against encroaching police officers, Toronto Police officers began to attack and pepper spray protestors. Several police cars arrived on the scene, armed with rubber bullet rifles, and began to attack the protestors. The tenants did not back down, and at least three tenants were arrested by the police. Hundreds of protestors told the police that they would not move until all the arrested protestors were released without charges. The police released all of the protestors, unconditionally, as tenants refused to back down.

Under the current law, the Residential Tenancies Act, only the Landlord and Tenant Board (LTB) has the power to hear and order evictions. A fundamental part of administrative law is access to a fair process. According to section 59 of the Residential Tenancies Act (RTA), a landlord must give the tenant adequate notice, usually 14 days after the non-payment of rent, of their intention to file for a hearing before the board, and set out the amount of rent due and specify that the tenant may avoid the termination of the tenancy by paying by a specified date to terminate the eviction notice. Through the RTA the board is also empowered to devise rent repayment plans between landlords and tenants.

Bill 184 would allow landlords to bypass the board completely and offer tenants their own repayment plans. While the act allows tenants who refuse the landlord’s offer to still appear before the board, many tenants from low-income and racialized backgrounds are more vulnerable to being pressured by landlords into signing agreements because it can be difficult and overwhelming to navigate through the LTB. The proposed bill permits the board to grant evictions if the tenant rejects a repayment plan, emboldening landlords to offer unreasonable repayment plans. The bill will permit landlords to evict tenants without a hearing if the tenant fails to fulfil the terms of the repayment plan. The bill has passed second reading and was brought before a legislative committee this week.

Bill 184 will target racialized working-class communities from Jane and Finch to Malvern and displace thousands of immigrants, refugees, and working-class people—the very same communities that are home to many essential workers during the COVID-19 pandemic. Corporate landlords have been wanting to do this for over a decade now. The bill will empower landlords to evict tenants without notice. Legal clinics like Kensington Bellwoods are advising tenants not to sign repayment plans.