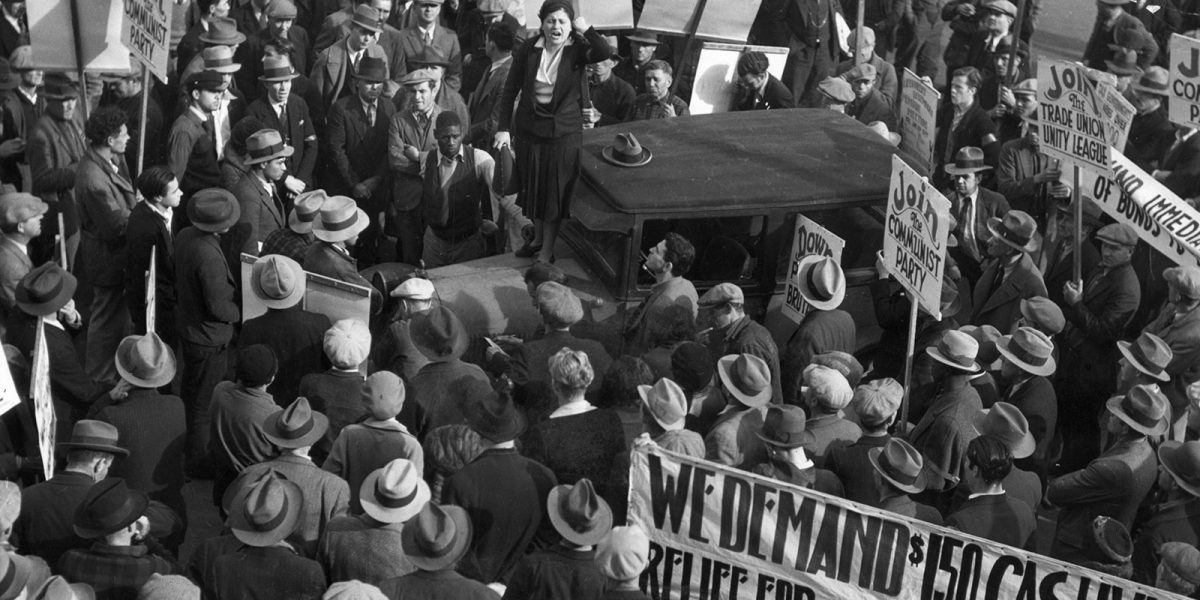 The Romance of American Communism by Vivian Gornick (Verso, 2020).

Nearly a million Americans were members of the Communist Party. From it’s heady origins in 1919 following on the heels of the October Revolution, to its apex during the tumultuous decades of the 30’s and 40’s, working openly in the midst of mass poverty and unemployment, Jim Crow, an apocalyptic world war, and the looming threat of fascism, the Communist Party played a critical role in the political life of the era. Vivian Gornick’s The Romance of American Communism, which was originally published in 1977 and reprinted by Verso this year, reprises a small slice of that history in the form of an oral retelling by former members of their experiences joining, working within, and leaving the Party.

The history of communism in the popular imagination of the United States usually comes packaged in two general varieties. The first is that of hard-nosed anti-communist conservatives like William F Buckley, who view the entire enterprise as an irredeemable death cult bent on destruction of American ideals (however tenuous and contradictory said-ideals may be in definition). The second variety is a liberal view often espoused by former Communists such as Arthur Koestler, which saw Communists as well meaning but ultimately braindead automatons who found an animating force in the strict totalitarian discipline of the Party organization, which was controlled and directed in toto by Moscow. Thus in both varieties the Party is portrayed as an alien force existing outside of the everyday American experience, with its members infected by a strange and mystifying ideology that was propagated from without.

An ‘electric sense of life’

Gornick is writing largely in response to this second view and its evident falseness in relation to her own experience as the daughter of working class Communist Jews from the Bronx. Gornick contends, buttressed by numerous vivid accounts from former members, that the Party was made up of a wildly diverse group of people who lived, worked and organized throughout every region of the sprawling United States. Its members came from everywhere and their efforts were primarily responding to manifest racial, social and economic injustice encountered at home.

Gornick eloquently describes the ways in which the Party and its members engaged in the major struggles of their times: wherever capital’s churning forces lay — “in the fields of California, in the auto plants of Flint, in the steel mills of Pittsburgh, in the mines of West Virginia, in the electrical plants of Schenectady” —  there always seemed to be a Communist Party member ready to agitate and organize the workers.

Furthermore the political commitments that its members made (often at great personal and professional cost) were not driven by a desperate need to submit and abolish their own individuality through obedience to an external authority. Instead, Gornick argues that they were propelled by a spirit of creation, an intense feeling of fellow humanity, and an “electric sense of life” that was expansive rather than narrowing, liberating rather than shackling.

Party activism also served as an entryway into the wider world. For some this meant their participation in a larger internationalist project of socialist revolution. Many former members spoke of fighting in the Spanish civil war against Franco’s fascist forces and their resulting radicalization For others, the Party opened them up to the world of ideas and a deeper sense that an ordinary life lived purposefully could be imbued with grand significance. Still others felt that their involvement with the Party had an existential purpose, and the book contains many passages of members speaking to the idea of the emergence of a sense of self through the process of merging with others in a collective project.

In short, Gornick argues that the Communist Party in the United States was fundamentally American in origins and orientation as well as a vast humanizing experience for the women and who joined or lived within its sway. It provided structure, organization, and a sense of comradeship to the inchoate mass of restless discontent that smouldered and stirred at the heart of American life. Gornick quotes the novelist Richard Wright who stated that “[t]here was no agency in the world capable of making men feel the earth and the people upon it as the Communist Party.”

At the same time, Gornick does not shy away from analyzing the immense contradictions that festered within the lives of its members and the manner in which the party functioned. For instance, the ways in which an ironclad emphases on solidarity and comradeship were counterposed with arbitrary expulsions of members and public recrimination of friends and family. Or the ways in which ideas so thoroughly compelling and universal (one member recalled that his first experience reading Marx was like “fireworks going off” in his head) could be turned into a set of stilted, hoary slogans sufficient to convince workers to instead side with their bosses.

While the book is certainly not a strict history of the Communist Party as a political institution or its relation to the Soviet Union, it makes no claim to the contrary. It is complementary rather than definitive; providing invaluable nuance and personal fullness that would otherwise be irretrievably lost to history. One cannot read this book without being stirred by its ethos of activism as well as being firmly convinced of the significance of the million unnamed and unknown Party members who quietly worked for decades in pursuit of a better world. As a new generation of socialists cuts its teeth, it is vital that we honestly engage with this history as not just a distant phenomenon that happened ‘over there’, but as part of our history within a wider, thriving socialist tradition.

I was often reminded of other older historical left accounts like Ray Ginger’s biography of Eugene Debs and Issac Deutscher’s magisterial trilogy on Leon Trotsky. Gornick’s writing similarly trembles with an inexorable love and admiration for its heroes as well as a sincere and unafraid political commitment that bellows through every page. Rather than wallow in the pale, detached cynicism that defines much of the political writing of the last thirty years, we should take heed of the world bending romanticism that Gornick celebrates- in many ways it’s as vital to the radical spirit as any theoretical tome.