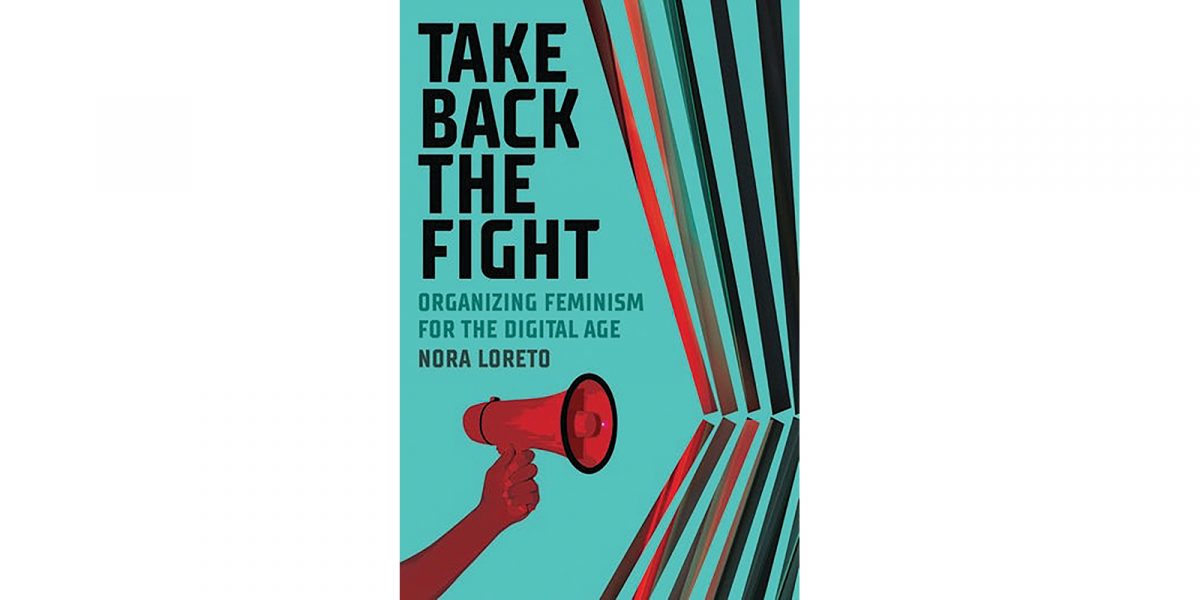 Take Back the Fight: Organizing Feminism for the Digital Age by Nora Loreto (Fernwood, 2020)

As Canada’s so-called “feminist” prime minister prepares to announce a federal election, Nora Loreto’s second book provides the perfect antidote to a campaign that will no doubt throw around “feminism” like a political football. Published almost a year ago, Take Back the Fight: Organizing Feminism for the Digital Age arms readers and activists alike with an understanding of feminism that both restores it to its radical roots and expands its meaning to include the most urgent struggles facing us today. As Loreto describes in her foreword:

To take back the fight means to wrestle feminism away from a mainstream understanding that is rooted in whiteness and capitalism, and to restore to the word the power to force government action, to force corporations to change course and to help journalists understand that feminism isn’t aesthetic, it’s a confrontation.

And that’s exactly what Loreto does. Over the course of ten chapters, she confronts the countless uses and abuses of feminism by mainstream politicians, pundits, and commentators, and measures the impact over decades of their re-appropriation and misrepresentation of a deeply liberatory politics.

But she does much more than that, too. She connects a new generation of activists, many of whom identify with feminist politics in one form or another, with the longer history of the feminist movement and, generalizing its best lessons, encourages them to grapple with a series of concrete questions that inform contemporary struggles. In this political moment, as we emerge from the pandemic and contemplate what a better world might look like, Take Back the Fight makes a number of significant contributions to this task.

First, it re-tells more than a century of feminist organizing and activism in Canada and Quebec, an especially helpful approach for readers who might not be familiar with it. Loreto’s history is not meant to be exhaustive; it provides an accessible review of the key moments, struggles, victories, and defeats that help explain the state of feminist politics today. In this sense, Take Back the Fight is an indispensable resource for newly radicalizing readers. It pays tribute to the work of previous generations of feminist leaders, organizers, and activists, at the same time as identifying the limits their movements faced and, in many cases, that led to their decline.

In particular, Loreto’s anti-racist lens draws attention to the long-term effects of white supremacy on day-to-day organizing in recent decades and emphasizes the contributions of BIPOC feminists throughout this period. One vivid example is her discussion of the rise and fall of the National Action Committee on the Status of Women (NAC), its impact on the fight for abortion rights in Canada in the 1980s and 90s, and the divisions that eventually caused its collapse.

Second, Take Back the Fight goes beyond “taking back” feminism. While Loreto restores it to a more genuinely radical tradition, especially in her discussion of its labour and socialist roots, she also deepens its radical nature, by insisting on a feminism that is anti-racist, anti-colonial, and anti-capitalist; that centres the needs, experiences, and insights of Black, Indigenous, and Women of Colour; that confronts and rejects Trans-exclusionary politics and practices; that is inclusive of women with a disability/disabilities; that is firmly rooted in the broader struggles of the working class as a whole; and that aligns itself with other struggles for social justice.

In this sense, Loreto confidently orients a new generation of activists towards struggles that, for some audiences, are not explicitly feminist, despite their obvious feminist content. One instructive example is the decent work movement in Ontario. Some observers see it only as a labour issue, but its key demands have been developed, articulated, and won by racialized working-class women–who are also the main beneficiaries of its success.

Third, Loreto’s text helps prepare all its readers to participate in the key debates facing today’s movements, by arming them with the critical lessons that past movements provide, as well as the best practices that have developed over decades of feminist organizing. Loreto also organizes her audience into a common discussion, a move that, in her own writing, begins to address a longstanding concern of the feminist movement. Where and how do feminists have the discussions they need to learn from each other, and from their own experiences, and to decide collectively the best path forward?

Take Back the Fight does not claim to have all the answers; indeed, Loreto cautions against replicating an approach from one experience to another, especially if we are unfamiliar with what makes each struggle unique to its own historical circumstances. Instead, she suggests that the answers we need will be found in the practice of organizing ourselves into new networks, which should both draw on the lessons of the past and be open to new forms of activism.

Throughout her book, Loreto is conscious of the challenges of organizing in the digital age. She acknowledges the opportunities, as well as the pitfalls, that come with dramatic technological changes to how we organize, disseminate, and access information, and accordingly communicate with each other in both public and private spheres. However, unlike other texts that confuse a wider range of communication tactics with a long-term organizing strategy, Take Back the Fight relies on practices, both online and in real life, that seek greater coordination among activists, that cultivate democratic decision-making and accountability among them, and that build their confidence through the day-to-day work that turns struggles into movements.

It is this question of coordination, democracy, and political development that should be of particular interest to revolutionary socialists. Loreto, who also identifies as a socialist, approaches it through the history of NAC. Although not a revolutionary organization, NAC nevertheless achieved some similar organizational effects, insofar as it united many disparate struggles into a common movement with shared goals. Loreto laments the absence of such an organizing influence today.

Likewise, socialists in the revolutionary tradition are also rightfully anxious about this “subjective factor,” and focus much of their practice on developing forms of organization that seek the same ends, although sometimes with too much of an emphasis on the far-off, long-term vision of “revolution,” and not enough attention on the immediate struggles that lay its groundwork. Another strength of Take Back the Fight is Loreto’s recognition of the dialectical relationship between the battles we fight today and their transformative possibilities in the future. Instead of counter-posing them, she anticipates how one creates the conditions for the other.

Loreto finished Take Back the Fight just as the pandemic was beginning to turn the world upside down. As a result, its public launch and subsequent promotion were unfortunately postponed. Loreto is about to publish a third book, but activists should not miss the opportunity to read and discuss this one more widely. Take Back the Fight is a significant contribution not only to the feminist movement, but also to all struggles for social justice. Activists would do well to draw from the lessons it carefully compiles and to adopt the expansive, inclusive, and truly radical feminism that Loreto’s text envisions.

Spring Magazine and The City & The City Books will host an in-person book launch of Take Back the Fight: Organizing Feminism for the Digital Age on Thursday, August 19 at 6:30 p.m. EDT at Merk Snack Bar, 189 Ottawa Street North, Hamilton. Author Nora Loreto will be the featured speaker. Please join and share on Facebook. The book launch will also be broadcast on Zoom and Facebook Live via Spring’s Facebook page.