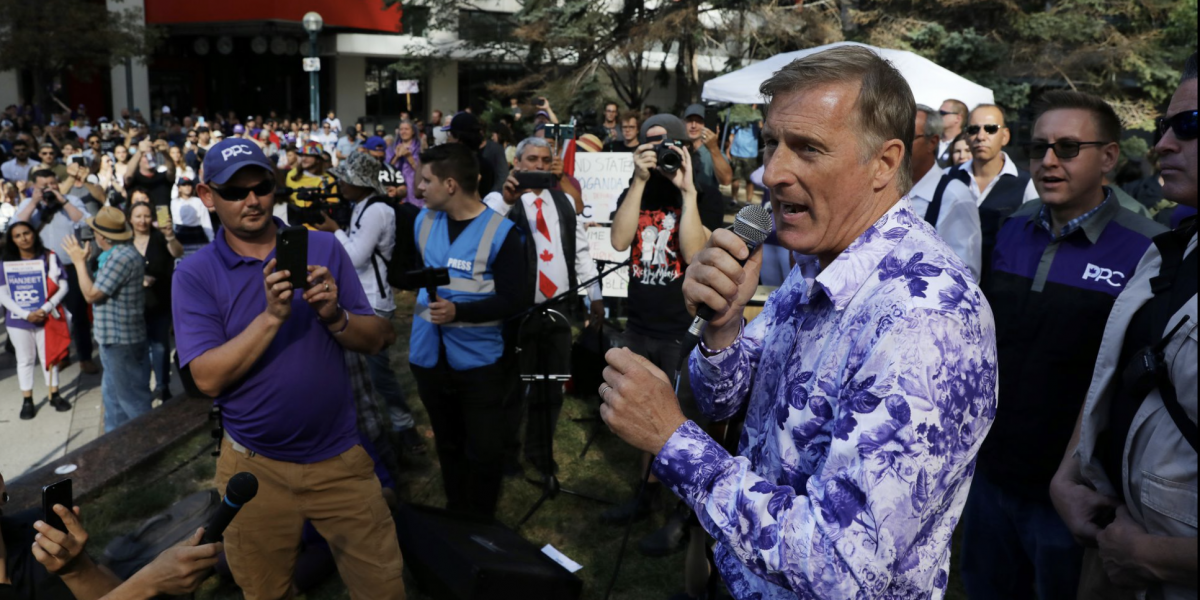 The People’s Party of Canada, a rightwing split from the Conservative Party, has seen its poll numbers rise and its rallies swell over the course of the election.

While current polls show that the  PPC is far from taking power, the PPC danger should not be underestimated. They are a pole of attraction on the far-right and the only strong voice opposing vaccine passports. Their growth only gives a wider platform for racism, bigotry and a potential to pull the entire political debate to the right.

The PPC claims its aim is to bring “freedom and prosperity” to Canada, what they would actually bring would be more pipelines, massively reduced social services, a denial of climate change, more restrictions on immigration, more guns in the hands of citizens, privatized healthcare, and an end to “official multiculturalism.”

Who are the PPC ?

The PPC was formed and is currently headed by Maxime Bernier, also known as “Mad Max.” A disgraced Cabinet Minister under Stephen Harper and former Conservative MP, Bernier decided the Conservative Party had become “too intellectually and morally corrupt” for his taste after losing his seat in 2018. In a full-length statement on why he decided to leave the Conservative Party, he cited too much regulation and elbow-rubbing with the Liberals, as well as a disapproval of multiculturalism.

Positioning itself as anti-establishment and anti-corruption, the PPC claims to put the interests of “Canadians” first. In other words, they are far-right white nationalists who make few attempts to hide their blatant racism and xenophobia.

The PPC have gained a small but committed following over the past few years. The CBC estimates that the majority of their supporters are disgruntled Conservatives who, like Bernier, think the Conservative party is going too far to the left. The Conservative Party, it must be remembered, was cobbled together out of the Progressive Conservatives and the more right-wing Reform Party in 2006.

As the only party that’s opposing vaccine passports, the PPC has also gained support from some who wouldn’t necessarily vote Conservative but think that the government has no right to enforce vaccine passports and mandatory vaccination.

While it is still hard to say how many of these supporters there are, the PPC is definitely taking advantage of frustration with pandemic restrictions to increase their support. Bernier himself made numerous appearances at anti-lockdown rallies throughout the year and was arrested in June for refusing to self-isolate after entering Manitoba. By creating an image of himself as an anti-lockdown hero, he has become a martyr for freedom among those fed up with masks, lockdowns, and vaccine mandates.

Bernier continues to build his support base through rallies. Just yesterday, he drew a substantial crowd in Hamilton, where he greeted maskless fans with hugs and delivered rousing speeches, promising supporters more freedom from pandemic restrictions. Claiming he was pushing for “respect” and “freedom,” he called for revolution against “tyranny” and “too much socialism.”

Various polls place the PPC between 6.6% and 11%, a significant rise from the mere 1.6% of last election. The PPC support is likely coming from two places, non-voters who feel alienated from the political landscape and former Conservative voters, many of whom are disappointed in provincial Conservative-led governments. Many believe that they could take enough votes away from the Conservatives to re-elect Trudeau. If the primary goal of an election is simply to keep the Conservatives out of power, then this may not be such a bad thing. In this line of thinking, the PPC functions as a welcome source of disruption to the Conservative party.

In the long-term, this thinking is dangerous. If the PPC significantly increases its vote share, it can leverage that into increased influence, pulling both the Conservatives and the wider political debate to the right. In that case, they would become a threat not only to the Conservative party but to public services, economic regulation, universal healthcare, and migrant communities.

One need only read John Ibbitson’s latest column in the Globe and Mail to see the impact the PPC can have. Ibbitson goes to great lengths to legitimize the PPC’s hate and argue that their concerns about non-European immigration are valid. This is a concession to racism and shows how the PPC can shift the political terrain rightward.

The danger of the PPC

Even if they never win a majority vote, the PPC’s ability to move the conversation further to the right on questions of immigration opens the door to increased violence and hate directed at racialized communities. Fundamentally, they are white-supremacists and it’s impossible to support some of their platform without also supporting their racism and xenophobia. More support for their anti-vaccine rhetoric also means more support for white nationalism and fewer gun regulations.

Furthermore, PPC supporters seem willing–even eager–to resort to violence. Bernier himself claims that he does not condone violence, but has not succeeded in quashing it within his own party. After Shane Marshall, former PPC riding association president, threw stones at Trudeau during a public appearance, Bernier fired him and condemned the action. But Marshall is not an isolated example. One supporter even encouraged others to bring assault rifles to Toronto General Hospital to somehow prove that COVID-19 is a hoax. Whether Bernier supports it or not, the PPC is organizing militantly.

White nationalism paired with an inclination towards violence is a dangerous combination. If the past half-decade has shown us anything, it is that the extreme right can rise to power quickly and unexpectedly.

It is clear that the PPC is organizing on the far-right, and this must be taken seriously. While their poll numbers remain relatively low, they have made significant gains in the past few years and can no longer be written off as a fringe organization. By capitalizing on discontent with the pandemic response, they also increase support for racist immigration policies, pipelines, and an end to universal healthcare. While claiming to fight for freedom, they are actually stoking the fires of bigotry and violence.