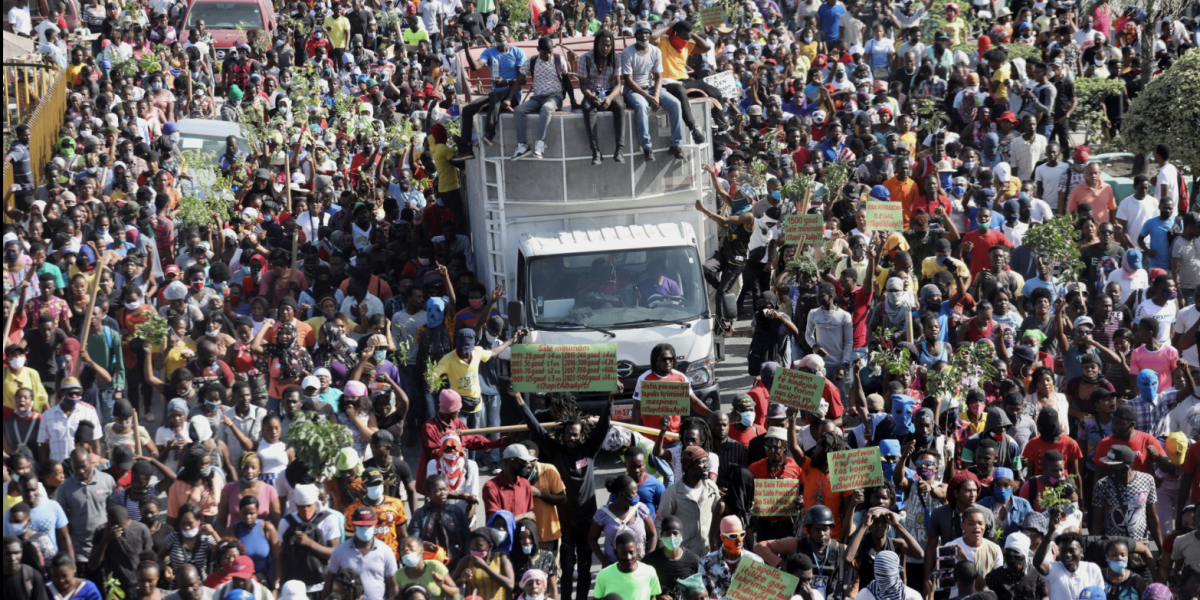 A government truly committed to a “feminist foreign policy” would support Haitians striking to boost their 70-cents-per-hour wage. But thus far Canadian officials have responded to the workers’ action by paying a celebratory visit to a sweatshop and ignoring protests repressed by Canadian-funded police.

At the start of last week thousands of Haitian apparel workers launched a strike for a higher minimum wage. Thousand have taken to the streets in Port-au-Prince calling for a tripling of their 500 gourdes daily salary (CDN $6.20). The largely female workforce stitches shirts and other apparel for brands like Gap, Walmart, Target, JCPenney as well as Canadian apparel giant Gildan.

The Canadian government has a long history of promoting Haiti’s export processing zones as a means of “development.” In a 2007 speech, then-president of the Canadian International Development Agency (CIDA), Robert Greenhill praised the Haitian garment industry. At a Canadian Institute for International Affairs conference Greenhill “was extremely sanguine about the positive effects that would flow from the reactivation of Haiti’s export processing zones.” Two years later international development minister Bev Oda told the Ottawa Citizen, “Haiti would have been historically a large producer of textiles and garment exporting to North America. It lost that industry and now we’re looking at how we can rejuvenate the industry there.” On Friday Canadian officials visited a Canadian run sweatshop and tweeted a photo of women happily sewing shirts at an industrial park in the north of the country.

Over the past decade Ottawa has channeled $100 million into the Haitian police, which the Liberals now label “feminist” assistance. A month ago the Trudeau government announced a $15 million contribution to the Haitian national police under its Feminist International Assistance Policy. Police in Port-au-Prince have beaten protesters and fired significant amounts of teargas at them. On February 15 Ambassador Sébastien Carrière met Haiti’s police chiefs, tweeting “Canada is pleased to have been able to engage with leaders of the HNP [Haitian National Police] in order to reinforce Canadian and Haitian collaboration in the security sector.” The result of this collaboration was on display this week week, when Canadian-supported Haitian police opened fire on a crowd of garment workers rallying for a higher minimum wage, killing a reporter.

Apparently, the Liberals are a little confused and perhaps historically ignorant of what “feminist” means. They may be unaware that feminists have often led strikes, especially those of women. Still, you’d think an expression of support for Haitian apparel workers would be particularly appropriate during Black History Month. Haiti’s sweatshop owners are largely light skinned while the workforce is almost entirely Black.

A Canadian statement supporting the strikers call for an increased minimum wage would have an impact. Ottawa is extremely influential in Haiti and the country’s de facto leader Ariel Henry is almost entirely dependent on the Core Group of foreign ambassadors.

Last month Trudeau, Joly and international development minister Harjit Sajjan hosted a meeting of foreign ministers “to find sustainable solutions to challenges faced by Haiti and its people.” One of those most obvious challenges is a 70-cents-an-hour minimum wage.

If the Trudeau government were serious about its “feminist foreign policy” they would mark Black History Month by expressing support for Black women making $6 a day sewing T-shirts in facilities largely run by white men.