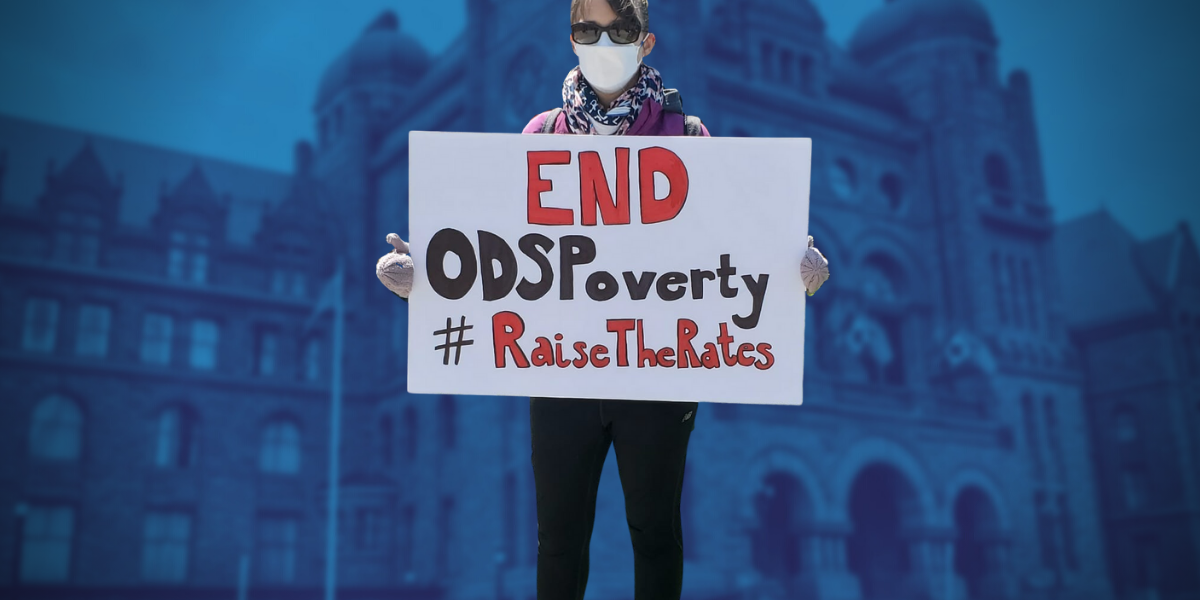 On April 19 Doug Ford was asked if he will raise ODSP (Ontario Disability Support Program) rates, his response was “That’s an opportunity to sit down and discuss, for the people unable to work I will always be there to support them but for people able to work the best way to support them is get them a job.“

This is a rich remark from the Premier as he has had four years to sit down, discuss and act on ODSP rates. Instead, he has used those four years to simply ignore the growing calls to increase ODSP rates. Not only has Doug Ford ignored calls for an increase in rates, but he also canceled scheduled increases as soon as he got into office. Before the 2016 election Kathleen Wynne made the promise to increase ODSP by 3% a year for three years. Ford’s government canceled those and made a one time increase of 1.5%.

Current ODSP rates max out at $1169 for single people per month, which is just a $239 increase since 1998. When you account for inflation the current rates are beyond outrageous. This $1169 per month has to cover rent, food, transportation, medical expenses, and any other expenses someone might have. This amount is not enough to cover basic living expenses. When you factor in extra medical expenses it becomes impossible. Prescriptions, medical equipment, physiotherapy, massages, mental health services, and many other things are not always covered in Ontario leaving many people with few options. They are frequently forced to choose between paying their bills and accessing any of these vital services.

MAID being used as an alternative to increasing ODSP

For years disability activists have been sounding the alarm that these rates are far too low for people to live on. In early April we saw the horrifying reality of this when an Ontario woman chose medically-assisted death after she was unable to find affordable housing. The 51 year old, who chose to remain anonymous, had severe sensitivities to chemicals. She was unable to find affordable housing that was free from cigarette smoke and chemical cleaners. After her death, she left behind letters and a video explaining her desperate two year search for housing. She was living on disability supports and had no way to find an affordable apartment free from chemicals.

The government is more prepared to offer access to assisted dying than to give people the social supports that they need to live. Canada altered its medically-assisted in dying (MAiD) legislation in 2021 to allow those whose natural death “is NOT reasonably foreseeable” to be approved for MAiD, when previously only those whose natural death was reasonably foreseeable were eligible. This change in legislation alarmed disability activists who warned that people with disabilities may be pressured into seeking medically assisted dying because they do not have adequate social supports. We are now seeing this warning become a reality. Our province has all the resources to provide adequate supports but is choosing not to do so. The government is again putting profits over people.

Forcing people to work is not the solution

Not only is Ford’s answer to the question about ODSP ridiculous based on his lack of discussion and cuts he has made to ODSP, but the implication that people on disability need to get jobs is absurd. Recipients of ODSP are required to repeatedly prove their disabilities and how it stops them from working to receive ODSP. The majority of people on ODSP are unable to work, and for those who are able to work they may not be able to work full-time or enough hours and need assistance to fill in the gaps. Another barrier to working is that people on ODSP who do work can have money clawed back. Anyone on ODSP who earns employment income will see their earned income clawed back by 50 percent after the first $200 dollars earned in a month.

When Ford implies that the solution to low ODSP rates is to get people on ODSP working to supplement their income, he is blaming people on ODSP for living in poverty. The reality is that Ford and previous governments are the ones to blame for attacking the province’s income supports and driving so many to the brink.

Fight for Ford, raise the rates

People’s lives are on the line and Ford refuses to acknowledge or act on this. He refuses to increase ODSP, which is par for the course for a premier that is in the pocket of big business. Throughout the pandemic, Ford has ignored what would actually benefit the people of Ontario. He has refused to increase the minimum wage, bring in paid sick days or offer worker protections. He has failed to protect the people of Ontario from COVID by rushing to reopen the province. In doing this he has increased the number of people who have caught COVID, many of who may end up with long-covid and may end up having to go on ODSP.

We all know how Ford will handle this increase of people in the province with disabilities. He will continue to ignore them, and he will treat people as disposable, putting profit first as he always does.