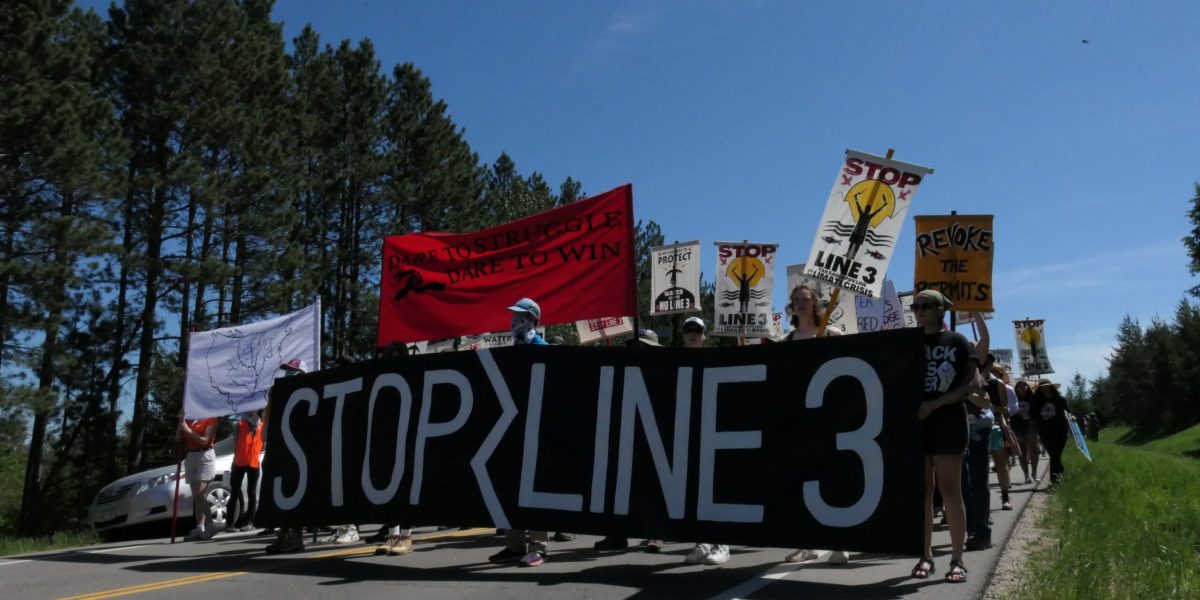 In the past few months, approximately 600 water protectors have been arrested during direct action to stop the construction of Line 3 on 1855 treaty territory in Minnesota.

Enbridge, an Alberta-based pipeline corporation, is illegally building a new tar sands pipeline that will run through, and contaminate, over 200 bodies of water, 800 untouched wetlands, and 22 rivers. Alongside the possible contamination, the pipeline will harm sacred wild rice crops, and threaten the extinction of Higgins eye pearlymussel and numerous other endangered mussels, fish, and birds. Line 3 would effectively run through Anishinaabeg land, violating constitutional rights of Ojibwe peoples to hunt and fish on 1855 treaty territory.

Line 3 is a threat

The so-called replacement of the already established Line 3, a pipeline which resulted in a 1.7 million gallon oil spill in March of 1991, would be built through unpolluted wetlands, expanding from 280 miles to 380 miles. The construction of Line 3 will also increase climate emissions, “adding the equivalent of 50 new coal-fired power plants or 38 million cars and threatening to cancel out progress made by the Walz administration’s steps forward on climate”.

The new pipeline is proposed to run through the Mississippi River to the coast of Lake Superior — the world’s largest freshwater lake by surface area. For water protectors, and those in solidarity with the Indigenous-led resistance against the fossil fuel industry, the concern is not if the pipeline will spill, but when it will spill. The impacts of a tar sands spill would directly lead to downstream consequences for the 48 million people on Turtle Island who source clean drinking water from the Great Lakes.

The construction of Line 3 directly threatens the safety of the climate, water, and water protectors. The state-sanctioned, corporate-sanctioned violence against our ecosystems is directly tied to ongoing violence against Inidgenous peoples. The building of pipelines, violations of Indigenous sovereignty, and pollution of the land and water directly correlate to a increase in sexual violence and missing and murdered Inidgenous women, girls and two-spirit peoples.

Additionally, the recently proposed federal Bill H.R.1374, titled “Enhancing State Energy Security Planning and Emergency Preparedness Act of 2021”, would publicly and legally standardize the funding of law enforcement by companies such as Enbridge and TransCanada with the aim of suppressing Indigenous-led resistance against the fossil fuel industry. Even without Bill H.R.1374, Minnesota police have currently been paid $500,000 by Enbridge through the Public Safety Escrow Trust Account. Enbridge, a foreign corporation, is actively partnering with police to suppress – and incite violence upon – Indigenous water protectors. The State’s use of privatized corporate funding, as a means to repress political opposition, makes exceptionally

clear what many folks already know — the police protect wealth and corporate interest over the survival of Indigenous peoples and Mother Earth.

Additionally, through the use of National Guard troops, the state could potentially be engaging in state-sanctioned, legalized, and public murders of Indigenous peoples and water protectors. National Guard troops have been used as a force of control, repression, and police violence to repress water and land protectors at Standing Rock and the Keystone XL pipeline. If the state believes they could not have reasonably used other means to defend property,especially in the case of a pipeline if Bill H.R.1374 is passed, the National Guard troops are permitted to use lethal force.

People before pipelines and profits

It’s evident that the state will not hesitate to use police force to ensure that corporations are able to extract profit from Mother Earth, even at the sake of her survival and the lives of Indigenous communities, land and water protectors. Now is the time to take action to ensure the safety and survival of Indigenous communities, our ecosystems, and generations to come. This movement requires collective action and Indigenous-led resistance, tell senators to vote NO on HR 1374, demand that banks such as Chase, Citi, Bank of America and TD Bank to STOP financing Line 3, and stand in solidarity with water protectors currently on the frontlines.

Visit tinyurl.com/ResistLine3 to learn about more ways you and your community can help support the resistance against Line 3.