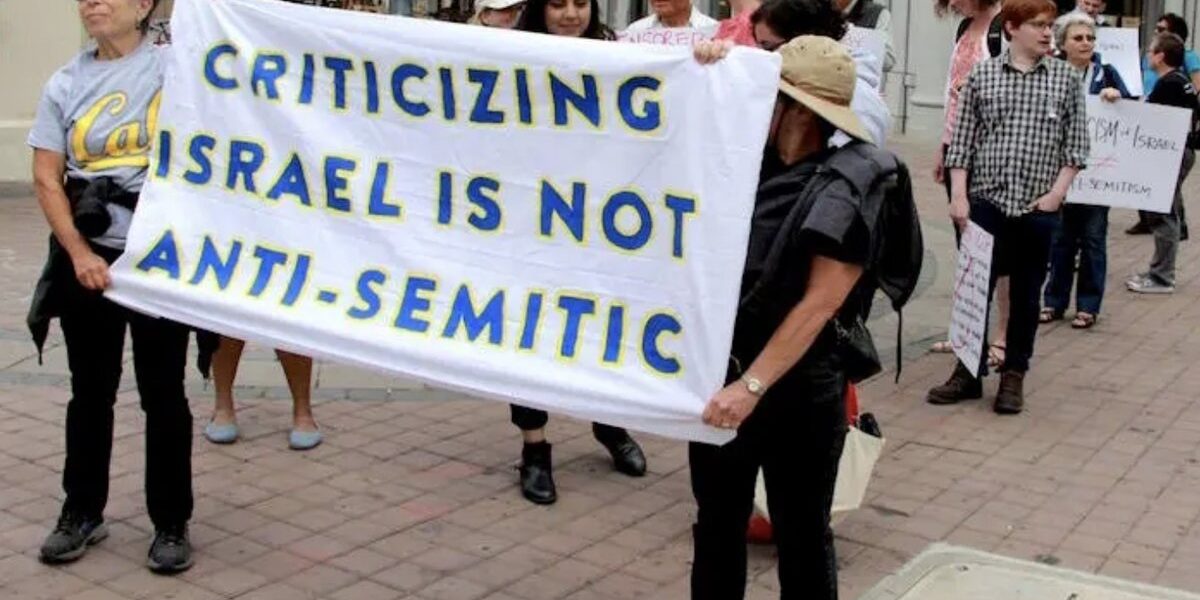 The pro-Israel lobby has done it again. It has seized upon a public speech that criticizes Israel, and brutally attacked the author with a false accusation of anti-Jew hate, inviting a party of pundits to join in a mob-like assault. This is what befell Ottawa-Centre MPP Joel Harden for speaking out against Israel’s human rights abuses.

According to the media, he had allegedly pronounced some vaguely anti-Semitic stereotype. Yet, none of the pundits who speedily joined in the vilification of this much-respected MPP had bothered to check the facts. They took the pro-Israel lobby at its word. Apparently, when it comes to allegations of anti-Semitism, facts don’t matter to those who wilfully wish to defile a critic of Israel. The tribunes of Palestinian human rights are fair game and the pro-Israel lobby is out to destroy them.

If asked to identify the actual anti-Semitic slur for which Harden has been so vilely charged, most Canadians would be stumped. Even the experts, including many in the diverse Jewish community, cannot say unanimously that there was something wrong in his remarks. Some have wavered, some have worried, some have been unable to really capture with unequivocal confidence that there was something racist in Harden’s remarks. They have strained to find a clue, as if his remarks were some inscrutable medieval text. The search for an obvious anti-Semitic slur has been arduous, speculative, and uncertain. Indeed, the quest for the smoking gun has been in vain, for in truth it does not exist.

But if uncertainty and confusion have ruled the quest for Harden’s so-called guilt, there has been no dearth of certainty on another side of the equation: the pro-Israel lobby has done enormous personal damage to a decent individual of considerable political conscience and such undeniable defamation is an act of shameless aggression.

What did Harden say and what was the context?

In an interview with Peter Larson of the Ottawa Forum on Israel Palestine, Harden was discussing the importance of conducting respectful and honest dialogue with people holding differing political views about Israel’s human rights abuses: “As a left politician—if you’re a politician that doesn’t believe in the status quo and wants to change things—it’s your obligation to have those courageous conversations that start with listening… where someone’s at, then asking questions. And I have asked many questions of Jewish neighbours here, you know, how long should we put up with this?”

The line that has caught public attention and that has been skewed and prised out of context is the following: “I have asked many questions of Jewish neighbours here, you know, how long should we put up with this?”

There are multiple readings of Harden’s remarks, but none amounts to an anti-Semitic stereotype, as some have hastily concluded. The tone in the words “how much longer” and “should we put up with this?” is clearly one of exasperation over Israel’s longstanding military occupation. Seventy-four years is a long time to wait for the end of Israel’s accruing human rights abuses. The words “put up with this” signal weariness and impatience. Harden might have said: “Enough already!” but instead he remained polite.

Furthermore, there is no indication that the Jewish neighbours to whom he posed the questions were totally unsympathetic to his views or did not concur with his exasperation over Israel’s unending occupation. Indeed, there is no indication that his neighbours were even fervent devotees of Israel. Nor do we have any information about the nature of the questions that he addressed to his Jewish neighbours. “How long should we put up with this?” could well be read as rhetorical question: i.e., how much longer should those who view Israel’s crimes as unconscionable wait for the end of injustice? “Putting up with this” could signal Harden’s impatience with Canada’s staunch support of Israel, with its miserable record of voting at the UN against Palestine. This sign of exasperation with Canada’s preferential treatment of Israel could equally be the prompt of an exhortation: e.g., “We have waited decades to see the end of Israel’s military occupation. It is time that our Canadian government spoke up openly about Israel’s contravention of international law.”

Anti-Colonialism is not Anti-Semitism

There are countless ways to read Harden’s words. But each of these readings categorically excludes the idea that Harden was blaming his Jewish neighbours for Israel’s crimes and that his critique of Israel was the stuff of anti-Jewish conspiracy thinking. There is no evidence to that effect at all. Only a wilful misconstruction and twisting of Harden’s words—to suit the pro-Israel lobby’s vilifying objectives—would yield that conclusion.

Then there is the other statement in the interview that critics have pondered: “If I were to name … the single greatest threat, the single greatest origin of violence in the Middle East, it is unquestionably the state of Israel and the way in which they feel absolutely no shame in defying international law, doing whatever they want.”

If the formulation “single greatest origin” sounds like Harden is assigning excessive blame to Israel, the fact is—and it should be understood by any adult, and certainly by anyone who has taken Political Science 101—a state is a system, not an individual. No Jew has been physically harmed by Harden’s critique of Israel; only a Zionist sensibility has been offended, because the idea that Israel is a counterfeit democracy and responsible for egregious war crimes and human rights abuses is too much for Israel’s devotees to handle emotionally. Indeed, the visceral volatility provoked by Harden’s reasonable critique results in a knee-jerk reaction: an aggressive outburst and the unthinking recourse to blasting the critic with psychological artillery. But ideological insecurity, unsettled conscience, and failed anger management on the part of the pro-Israel apologist should not cost the messenger or the critic his/her professional career.

Whether one agrees with Harden’s formulation—“Israel is the single greatest threat, the single greatest origin of violence in the Middle East”—is a matter of political debate. Perhaps the US and Britain and post-war Europe in conjunction with Israel are all implicated in the settler colonial project that has devastated Palestine since the early part of the 20th century. But whether there needs to be more nuance and precision in the formulation is not a matter of racist defilement. It is simply a matter of analytical accuracy. And sometimes, in the rapid exchange that an interview can produce because of the nature of the questions and the unfolding repartee, such precision gets lost. But no criticism, even if it is wanting in refinement, merits the false accusation of anti-Semitism, the kind levelled at Harden. This is tantamount to using a sledgehammer on an innocent fly.

Many have been disarmed and rattled by the false accusation of anti-Semitism when that charge threatens their professional career. In the heat of the moment, it is easy to submit to the pro-Israel lobby’s threats and extortion of apologies for a “crime” that has not been committed. The apology is tantamount to signing a confession under considerable psychological pressure. Indeed, under the scolding words of Peter Tabuns, interim leader of the Ontario NDP, Harden was forced to apologize and recant his claim on Twitter that there was nothing anti-Semitic about his remarks. It is particularly unfortunate that he was cornered in this way.

It is even more unfortunate that the pro-Israel lobby feels entitled to impute some simulacrum of an anti-Semitic trope to an unsuspecting, innocent party. Knowing that the average Canadian will abstain from the controversy— few wish to enter into this ideological maelstrom—the lobby trumpets its accusations unabashed. Others, of similar political and ideological strain, join the chorus and emit cries of alarm. Strident moral condemnations go unchecked. And with this fomented atmosphere of moral panic, the pro-Israel lobby feels amply justified in performing its ritual of public humiliation, setting a formidable example before all those who dare to criticize Israel, and telling the world that the price for speaking truth to power can be perilously high. This is political terror par excellence.

Who is the real culprit?

In this climate of fear, many calculate that an apology to assuage the injured sensibility of the accusers will serve as protection against further attacks. The contrary is true; for even when the innocent critic offers an apology and recants, compromising his earlier principled stance—and this against his better judgement—there is no absolution. The pro-Israel lobby (along with its allies) gives neither charity, nor mercy, nor forgiveness. The Joel Harden affair proves the point. His apology did nothing to repair his damaged political profile or fend off further assaults. Those who have defamed Harden so abjectly are the true guilty party. It is they who owe him a profuse apology for a most despicable act of defamation and not least for provoking the abusive cries of a mob now clamouring at the ONDP’s door demanding his expulsion.

In face of this unthinkable prospect, it behooves the entire ONDP to protect Joel Harden from this outrageous political aggression. Anything less is a craven capitulation to the pro-Israel lobby’s persecution of Ottawa-Centre’s most admired MPP. Anything less will be burned in the memory of most NDP voters as a deplorable moment in the party’s history. The ONDP leadership must act fast before the die is cast.

A version of this text has been sent to the ONDP Caucus and Executive with more than 150 signatures from persons across Ontario and Canada, including members of the NDP, former ONDP MPPs, academics, activists, artists, diverse professionals, constituents of Joel Harden’s riding, among others.

Other organizations and groups have issued their own statements of support for MPP Joel Harden, including this one by Independent Jewish Voices – Canada: “Joel Harden Deserves Our Support” (Nov. 22, 2022). Show your support for Joel by sending this sample message to ONDP interim leader Peter Tabuns.