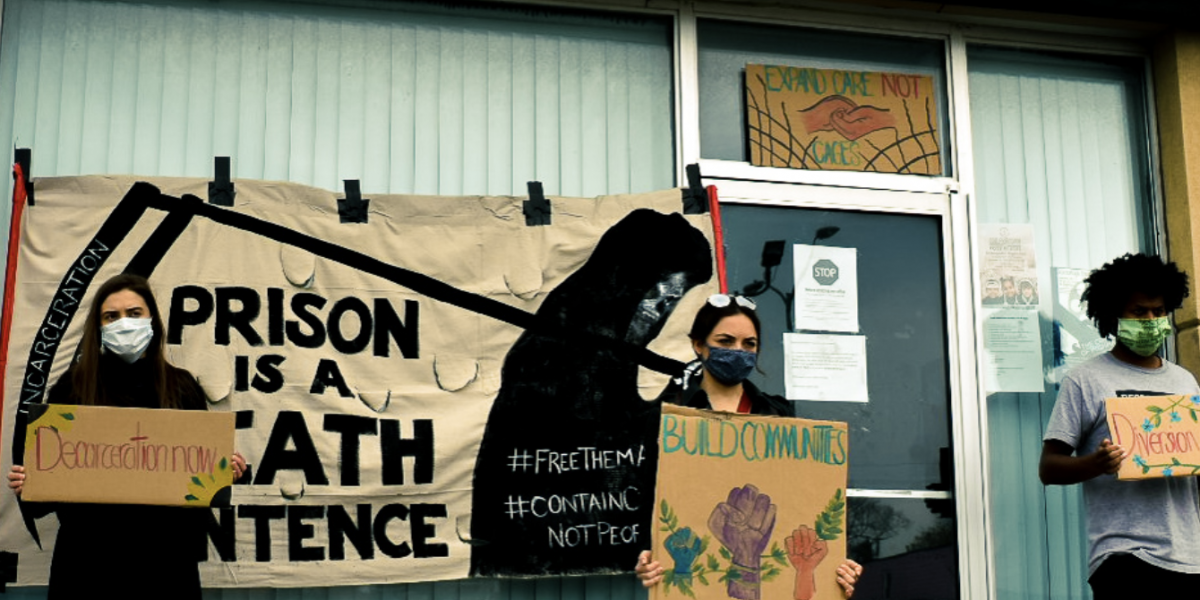 As COVID-19 wreaks havoc inside prisons across Canada, prison justice activists across the country launched two city-wide solidarity actions in Toronto and Ottawa, denouncing the tragic and preventable COVID-19 related deaths in Canadian prisons. Two prisoners have already lost their lives due to government inaction, and this number is likely to rise if the federal government continues to fail to release prisoners and prevent new infections and deaths.

Activists across the country demand immediate government action to release prisoners, flatten the curve, and leave no-one behind in the pandemic response. A car caravan of activists ended a funeral procession in front of Bill Blair’s constituency office in Toronto. In Ottawa, activists began the funeral procession at the Rideau Hall grounds and ended near the site where the Prime Minister delivers his daily press briefings.

The impact of neglecting prison populations is not only devastating for those behind bars, but it is also a public health catastrophe for non-incarcerated communities, as staff inevitably return to spread the virus throughout their communities.

Souheil Benslimane, a former prisoner now living in Ottawa, is a member of the Criminalization and Punishment Education Project (CPEP). He is also the coordinator of the Jailhouse Accountability and Information Line. Benslimane told Spring Magazine, “Prisoners on the inside are telling me that the the government’s actions are tantamount to a death sentence. We want more than just rhetoric. We want to see government policy where prisoners are released. It’s unacceptable that prisoners are forced into their cells 23 hours a day, cut off from their family and friends on the outside. It’s unacceptable that prisoners are forced to deal with staff that refuse to take proper precautions like the use of face masks.”

Rajean Hoilett, a member of the Toronto Prisoners Justice Project (TPJP) told Spring Magazine, “Today we organized an action across the country to demand that Bill Blair commit to federal decarceration. Since the start of the pandemic, we have seen very little action on the part of the federal government.” Despite the government’s announcements about prisoner release, Hoilett explained that only one prisoner has been released from federal custody following court litigation.

While the federal government continues to claim it is doing all it can to leave no-one behind during the COVID-19 response, Prime Minister Justin Trudeau has continued to evade questions on the topic and Minister of Public Safety Bill Blair has failed to release prisoners or otherwise take action to stem the growing outbreak. Canadian prisons have already seen more than 500 infections in carceral sites across the country.

Even before the outbreak of COVID-19 the proportion of Indigenous peoples in federal custody hit a record high of more than 30 percent while Indigenous women account for 42 percent of the female prison population.

“This is a human rights catastrophe. Indigenous and Black populations are incarcerated at rates that drastically exceed their proportion in the Canadian population,” said Hoilett. “Failing to release prisoners demonstrates not only a failed public health policy, but it is also a form of racial injustice.”

Alannah Fricker, another member of the Toronto based group said, “Canada is a country that abolished the death penalty long ago, but people behind bars are being left to die by the government. Every person who dies from COVID-19 infection in prison is somebody’s loved one who will never come home.”