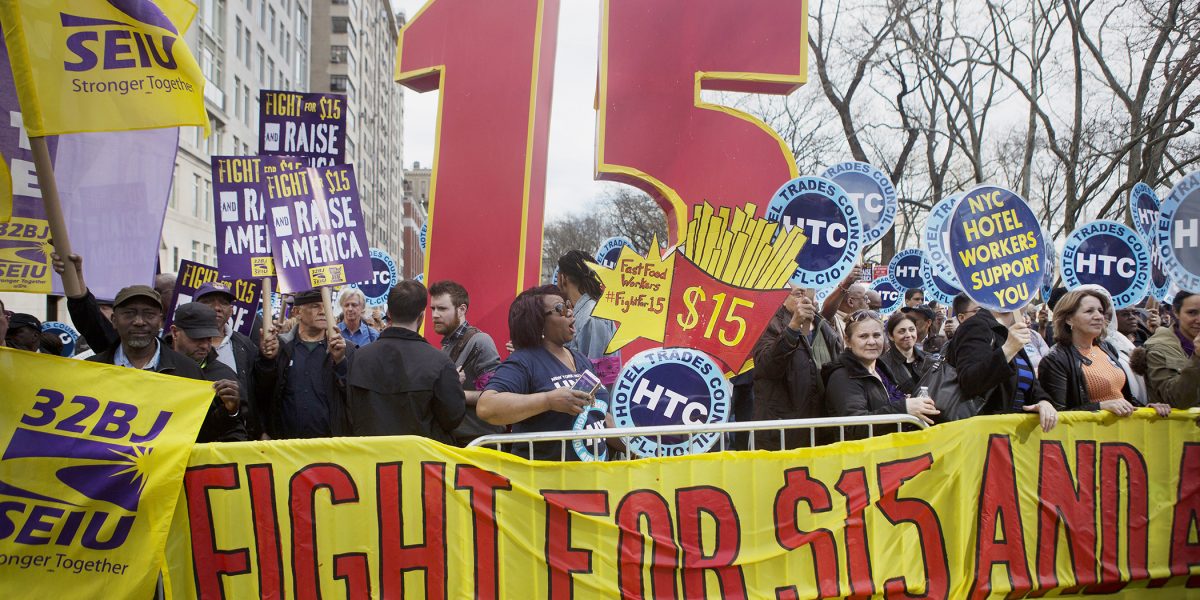 How did the American Dream, where hard working Americans could attain good jobs and a pathway to middle class stability, turn into a nightmare of perverse inequality and precarious work? And what are workers and unions going to do to put workers on the road from poverty to prosperity?

These are the two questions David Rolf sets out to answer in his book on the The Fight for $15: The Right Wage for a Working America. Rolf, the President of the powerful Service Employees International Union Local 775 in Seattle, makes the case that raising the minimum wage to $15 is one of the defining working class issues of our time. The book is structured into three parts: explaining the rise of low-wage work and inequality, telling the story of how workers and unions are organizing the Fight for $15 campaign, and debunking common myths the campaign is bumping up against.

Rolf’s examination of the rise of inequality and precarious jobs in the United States treads familiar territory. Hewing closely to the analysis of Joseph Stiglitz and Robert Reich, Rolf dates “the war on the middle class” to the mid 1970s. He argues that right wing ideas, like tax cuts and deregulation, began to take hold amongst segments of the working class spurned by rising unemployment and inflation. The right wing through the 1980s and 1990s was thus able to further their longstanding dream of eroding the power of unions and working standards.

The decline of the middle class was followed by the rise of “new work” which is fissured, flexible and insecure. Workers are atomized in the workplace and their collective power and solidarity have been eroded. Rolf paints a damning picture of work today, with its proliferation of subcontracting, part-time, temporary, and freelance work. Rolf also notes there are now more workers in the United States who have no legal right to form a union than workers who do.

Rolf’s analysis of the changing workplace is useful, though it underplays the role the attack on the welfare state has played in undermining workers’ confidence and security. For instance, the rise in post-secondary education fees for students has been a major reason why part-time work has proliferated. Likewise, the gutting of welfare entitlements in the 1980s and 1990s fed a sense of insecurity amongst low-wage workers. This erosion of social programs and public infrastructure contributed to a sense of isolation and economic fear amongst the working class. The political defeats suffered by the working class are not only as important as the setbacks endured by workers in the workplace, they are interlinked.

Understanding that the ideological shift in workers’ confidence and sense of collective power is the result of both the restructuring of employment relations and political defeat is important to grasp the true measure and impact of new work. Workplaces and work are changing in the 21st century, but as Kim Moody and Kevin Doogan have written it is important not to overstate this claim or assume the working class is either a moribund concept or a powerless political force. In his most recent book, On New Terrain, Moody argues that precarious work did grow as lean production methods were ramped up in the early 1980s, but that subsequently precarious work has not expanded further over the last 30 years. Workers feel more insecure and wages have stagnated, but the nature of work has not been dramatically upended over the last several decades.

The most interesting aspect of Rolf’s book is when he shifts gears from a broader analysis of the American economy to a narrative about how a $15 minimum wage was won in Sea-Tac and Seattle. Sea-Tac, a small suburb outside of Seattle that includes the city’s airport, was the first jurisdiction to enact a $15 minimum wage in the United States. The airport, which once provided many middle class jobs, is now the site of many outsourced low-wage jobs. This restructuring corresponded with a dramatic shift in working class demographics in the community, including the growth of a substantial racialized immigrant population.

Organizing efforts at the airport were linked with the wider Fight for $15 campaign launched by the SEIU in 2012. SEIU organizers along with other union staff and local activists aimed to push for a $15 starting wage and a union at numerous subcontracted companies prevalent at the airport. The strategy they eventually settled on was a municipal ballot measure for a $15 minimum wage. Rolf describes this effort, but leaves out many of the tensions and political debates that the former SEIU at Sea-Tac organizer Jonathan Rosenblum describes in his book Beyond $15. Rosenblum critiques the focus that Rolf and others in SEIU had on making the fight a purely ballot measure effort with little thought or resources going into building union power in the long-term.

The massive mobilization for the municipal victory in Sea-Tac, which knocked on thousands of doors and beat a well-funded employer campaign, created the Fight for $15’s first legislative victory in the country, while informing the movement’s subsequent strategy and inspiring new layer of activists. As Rolf notes, the initial intention of the Sea-Tac campaign was to win union recognition in order to bargain for wages, “instead they ended up writing a de facto union contract directly into city law.” While Rolf does not adequately develop this point further, this notion of treating employment standards as collective bargaining for non-union workers is one of the key strategic insights the Fight for $15 has highlighted in this period of legislative and judicial attacks on union rights.

Rolf’s solution is for unions to push for better bargaining models than the Wagner model, such as sectoral bargaining, that better reflect the current realities of work. This analysis largely misses how turning the economic struggles into broader political fights is a way for workers to turn the tables on employers and break down sectoral barriers that often stand in the way of broader worker solidarity. Raising the minimum standards can help collapse the gap between unionized workers and non-unionized workers, allowing the former to set the bar of workplace standards even higher.

Rolf, who was a key player in the Fight for $15 in Seattle, describes how the campaign used the momentum of the Sea-Tac victory to push for and win $15 in Seattle. He explains this victory was the product of an inside-outside strategy. Socialist Alternative and its allies pushed and kept the issue on the spotlight while Rolf and his allies leveraged that outside pressure to get a deal on the inside.

Rolf’s good cop bad cop narrative about how Kshama Sawant’s election and formation of the $15 Now coalition created the impetus for rational members of the business community and union leaders to hammer out a compromise flattens and distorts the real lessons of the Fight for $15. This is not simply a story about coming to a rational compromise with employers from which everyone benefits or showing bosses there is another way. The power of the Fight for $15 is about crystallizing class anger and injustice into a demand that strikes at the heart of inequality and stirs people to action.

The limits of Rolf’s work and book stem from his liberal theory of social change, with its emphasis on policy, legislation, and backroom negotiating. Rather than address the root causes of inequality and precarious work, he longs for labour to bring back the middle class of yore. His goal in the book and in the movement is to re-forge working class prosperity within capitalism. What this perspective undervalues is the tradition and role of radical working class politics in animating and organizing for reforms that seek to go beyond the confines of liberal capitalism, where the interest of workers is finely balanced with interests of businesses to earn healthy profits. The Fight for $15 is an inspiring movement and the book does a fine job in outlining the case for raising wages; what is missing however, is the broader political significance of this movement for the working class.