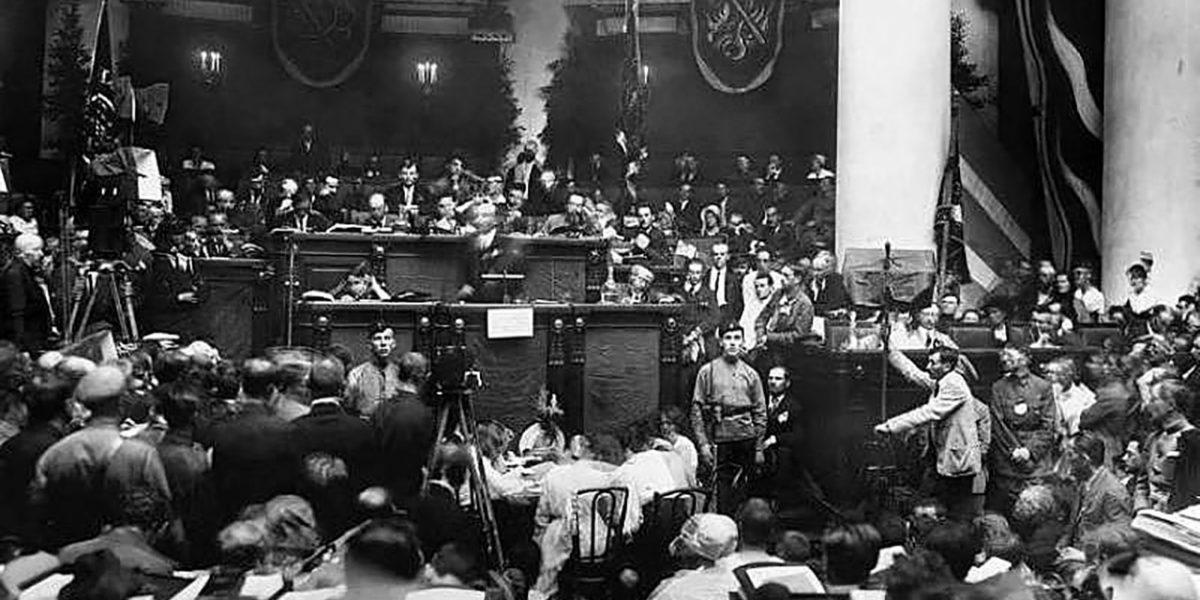 When the German Social Democratic Party voted to support war credits in the Reichstag in 1914, supporting the German ruling class’ drive to war, it rejected not just the Second International’s formal position on imperialist war it rejected the core principles of international socialism and working class solidarity. Rosa Luxemburg explained this betrayal in 1915 in this way:

“The fact that theory by itself doesn’t do the trick, that people can occasionally combine the best of theory with the shabbiest, most worthless practice – that is flagrantly demonstrated by the present day collapse of German Social Democracy. But this collapse came about not as a result of, but in spite of, Marx’s theoretical discoveries, and the collapse can be overcome only when the practice of the workers’ movement is brought into harmony. And as [this is true] on the whole and in general, so, too, in every important partial area of the class struggle we can establish a completely firm grounding for our position only on the basis of Marxian theory, from the many unretrieved treasures in Marx’s fundamental work.”

There is always a temptation in a political crisis to locate the present failings of a political organization in the general theories and ideas to which they subscribe. While this is certainly a possibility, in the rush to find the original sin it can be all too easy to overlook a concrete analysis of how these ideas have been applied.

The painful unravelling of the ISO over the cover-up of a sexual assault case and a general culture of abuse has opened up a wider discussion about political organization on the far-left. Is the political model of Leninism as practiced in the “micro-party model” as described by Hal Draper the source of the problem? Many on the socialist left will come to precisely such a conclusion.

Draper’s two articles “Toward a New Beginning – On Another Road” and “Anatomy of the Micro-Sect” lay out his critiques of the “micro-sect party model”. The articles themselves have to be placed in context and the alternatives that Draper points to must also be weighed against his critiques.

Draper was writing about sects in the early 1970s when much of the left in the United States and beyond were making a turn towards Leninism. Draper was just responding to International Socialists adopting more of Leninist structure. Draper, who came from the Socialist Workers’ Party and its offshoot the Workers’ Party, had been key in founding Independent Socialist Clubs, a forerunner of the IS in the 1960s. The ISCs were loose organizations, but with the rise of social movement struggles and workplaces struggles came a pressure to adopt an organizational model which could effectively intervene in these struggles. This same context is also what pushed the IS in the UK take a turn towards Leninism and why the New Communist movement attracted a substantial number of followers.

These models, and experiences within them, were not all the same during Draper’s day. Not only has the political context changed in which organizations who subscribe to Leninism operate, but the sediment of historical experience of political struggle the socialist left has accumulated in the 40 years since Draper’s analysis has changed how the Leninist left frames these issues.

Draper counterposes building a mass party in miniature to establishing a “political center,” a non-membership propaganda/education centre which takes the concrete form of a publication. The goal of the center Draper explains:

“The point is to get the general idea of a course that does not involve the building of a membership sect, and then work it out to express our political aims and views. The first thing that is distinctive about the course we want to take is this: we want to build a political center which has, as its goal, the formation of the prerequisites for a revolutionary socialist party… The creation (publication and distribution) of a basic body of literature is the accomplishment of a political center on which everything else depends. It is the key means to the end. The first task of this basic body of literature is to make possible the formation of the cadres – to provide the political nourishment on which cadres can be raised. Without it, no healthy cadre formation is possible.”

What is striking is how anti-democratic Draper’s vision is. The political centre, the editorial boards of the publications, are completely unaccountable. Instead giving workers the experience of collective decision making, the experience of debating ideas, the experience of collectively working through perspectives, Draper’s vision separates conception and execution of socialism. Theoreticians and intellectuals come up with the ideas and workers carry out the work, but with no chance of holding the former to account. This is top-down, rather than bottom up socialism.

Draper summed up the tasks of a political centre as:

This model Draper presents has not worked. No political centre, absent accountability and membership, has been able to conjure cadre from thin air. Building cadre or new layers of leaders requires engaging in common political action in which people can build their capacities as leaders, debate their politics, learn from their successes and failures, and develop their ideas from those experiences.

Draper is at pains to shoehorn Lenin’s approach as mirroring his perspective, but this is a misreading of the Bolshevik experience. Reducing the Bolsheviks to a political centre that became a mass party leaves out the intense ups and downs of political struggle, the changing of organizational forms, the evolution of its political membership and cadre, as well as the vibrant internal life of the political organization.

The micro-sect critique is worthwhile to engage with, but ultimately it mirrors other conservative readings of institutions, such as Robert Michels’s iron law oligarchy, which posits that as organizations mature they are destined to become more bureaucratic and conservative. There is no iron law of small socialist organizations, some indeed end up conservatizing, and adopting bureaucratic methods, but this is not pre-determined by structure, rather they are a reflection of political practice.

Leninism as a method

Leninism should not be understood as a cookie cutter model of organization, rather it should be seen as a political method of class struggle. Georg Lukacs sums up Leninism as:

“Leninism represents a hitherto unprecedented degree of concrete, unschematic, unmechanistic, purely praxis-oriented thought. To preserve this is the task of the Leninist. But, in the historical process, only what develops in living fashion can be preserved. Such a preservation of the Leninist tradition is today the noblest duty of all serious believers in the dialectic as a weapon in the class struggle of the proletariat.”

Politics trumps organization. The organizational forms of political struggle should flow out of the political goals and a political assessment of the current context. They have to answer what James Cannon noted was “the most important of all questions in politics—that is, the question of what to do next?”

Some on the revolutionary left have understood this as formulating a program for socialist transformation. This approach however misses the key element of the Leninist method of relating what you do to your own capacity. As Trotsky outlined:

“Do only what you are able to do with the forces at your disposal… Whatever you do, set yourself an objective, even if very modest, but strive to attain it. Proceed this way in every phase of organization. Then you should elaborate a short- or long-term plan. This is the only way to move forward and make the whole organization progress.”

Politics is about choice, about deciding what to do at any given moment to further your political goals. But how should we do that?

To decide on political objectives in a given moment requires a clear understanding of a theory of social change (can we slowly reform the system into socialism or is a revolution ultimately required to upend the capitalist class?), a measure of your own capacity, a democratic process to decide political priorities, and a level of centralism to coordinate these efforts. Taking collective action is the only way in which comrades can learn what works and what doesn’t and why.

Democratic centralism has a multitude of variations, but at its core it is a process through which cadre can learn through collective struggle by sharing political experience, learning lessons from the class, assessing and debating the outcomes of their practice, and building their leadership in practice.

How democratic centralism is practiced is more important than how it is understood in theory. There are many examples of socialist organizations, big and small, who verbally subscribe to democratic centralism, but in practice abandon it. This can take the form of treating democratic debate as a formality or seeing every disagreement as an existential threat. It can also mean false centralism, where unity in action is more rhetoric than reality – where everyone essentially does what they want without accountability. Many on the left who critique democratic centralism are in essence critiquing its misuse.

Socialist groups, especially revolutionary socialist groups in Canada, U.S and the U.K. are bound to be small so long as those ideas are in the minority in society. No political group wants to be small, but you have to be small before you can be big. Of course this does not mean that large socialist organizations will be the result of a slow accumulation of members. Much more likely is that mass socialist organizations will be formed through a series of fusions and splits that reflect a wider growth of socialist consciousness within the class. The role of small organizations should be to raise the combativity of the working class – without putting their organizational interests ahead of the class, and to build up the widest layer of socialist militants in the class who can use their collective wealth of experience and socialist ideas to help positively contribute to this process.

The revolutionary left has been going through a profound shake-up across much of the world over the last number of years. The political polarization occurring across much of the world has seen a more muscular reformism reborn from Syriza, Die Linke, Podemos, Left Bloc  the DSA to Corbyn and Sanders. These are exciting developments which reflect a positive development for the working class, but they also present a real challenge for the revolutionary left in how they should relate to this polarization. The pull of this new reformism is understandable, but liquidating ourselves into these new political formations can mean subsuming our political ideas and capacities in the service of projects which, however well meaning, are limited in what they can ultimately achieve. We need only to look at the experience of Greece (or anytime the NDP is elected in Canada)  to see what happens when the left abandons its political independence.

Challenges we all face

No matter the form of organization socialists take on they will be confronted by the same external challenges of having our ideas be in a minority of the class. They will run up against limited resources, as well as uneven consciousness and experience within the class and within our own organizations. Socialists will constantly be faced with a myriad of political choices and priorities. The structures we adopt will flow from how we politically answer these organizational challenges in the course of advancing revolutionary socialist politics. Abandoning Leninism to do this better is to miss the point, this ought to be the Leninist tradition.