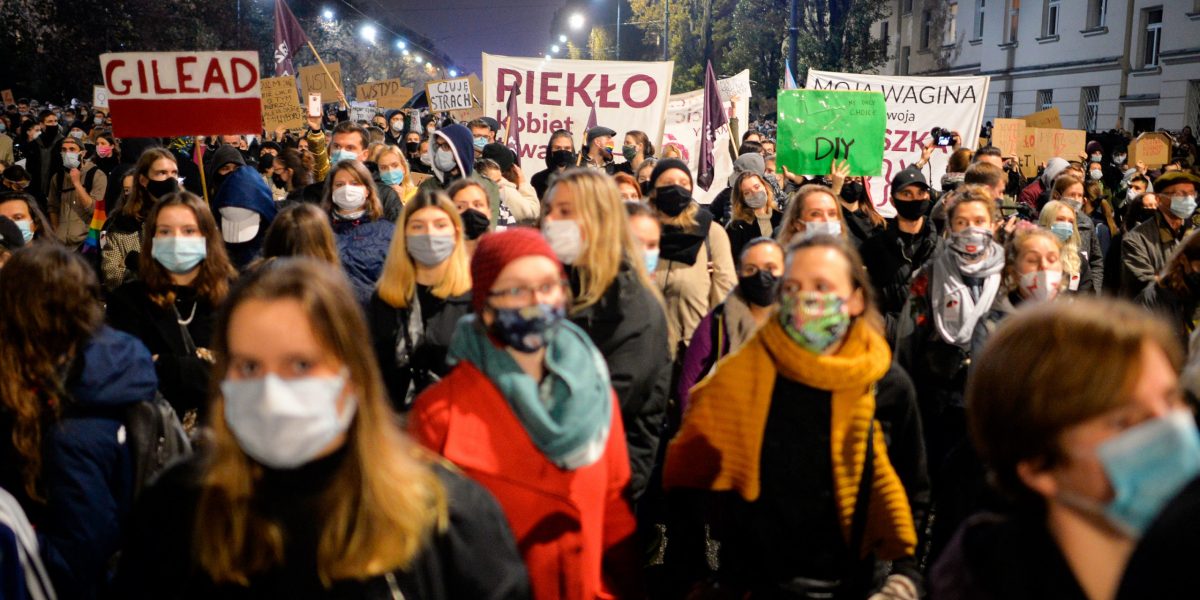 On October 22, the Constitutional Tribunal –a puppet court for the governing party – Law and Justice – made a ruling that further restricts an already draconian abortion law in Poland that essentially makes it unobtainable.

According to the new interpretation of the constitution, serious fetal defects no longer constitute legal grounds for undergoing this medical procedure leaving only rape, incest and risk to woman’s life as valid reasons for obtaining access to legal abortion.

The decision of the Constitutional Tribunal was just the most recent attempt to dismantle what was called a ‘compromise’ reached in the mid-nineties by politicians of various political factions done over the heads of women. It introduced one of the harshest abortion laws in Europe and was a payback to the church for brokering in 1989 the peaceful transition from socialism to capitalism but it also signified a symbolic reassertion of Polish catholic roots.

Fast forward to 2020, and this so-called ‘compromise’ appears to be anything but. Surveys show that most Poles support the liberalization of the abortion law, progressing secularization amongst younger generations is historically high and the authority of the clergy has declined as the church child sexual abuse scandals have come to light. Despite that, Law and Justice used the illegally appointed Constitutional Tribunal to bypass public debate over abortion and imposed an ideologically motivated interpretation of the law that will cause more harm and suffering.

The ruling of the Constitutional Tribunal infuriated hundreds of thousands of Poles who see it not only as an inhumane act of the de-facto leader of the country, head of the ruling party-Jarosław Kaczyński – but also as a deeply cynical move on his part to use the pandemic to pass a very unpopular law in order to appeal to his political rivals on the right. He clearly miscalculated, assuming that people would not risk demonstrating in the midst of the COVID-19 outbreak. He seemed to have forgotten that only four years earlier thousands of Poles came out on the streets in the Black Protests to oppose a legislation for a total ban on abortion.

Anger in the streets

The scale of the current demonstrations can only be compared to the Solidarity protests from the 1980s. In five hundred demonstrations organized in major cities and small towns across the country, more than 800,000 people including former Law and Justice supporters have marched against not only the new reading of the law, but also against the current government. The clever (“we apologize for the delays, we have to overthrow the government”), educational (“men of quality do not fear equality”) and often vulgar (“fuck Law and Justice”) slogans of the protesters reflect the level of anger of unmatched proportions. Crowds have been shouting “this is war” and “you have blood on your hands”.

Protesters have entered uncharted territory when they moved their dissent to the most politicized spaces in Poland, the churches. In Cracow, a few days ago, protesters gathered in front of the bishop’s palace holding letters that read ‘the house of Satan” to oppose the role of the clergy in pushing for years for the curtailment of women’s rights. Many rallying cries have singled out people responsible for this this decision such as the head of Law and Justice and the Prime Minister. Some protesters even went as far as to locate the house of the president of the Constitutional Tribunal who ironically lives in one of the most progressive European cities – Berlin and in a “gesture of care for her neighbors”: they distributed leaflets detailing who she was- an illegally appointed judge who watched over the stripping of nearly all of the remaining reproductive rights of Polish women.

What can we make of these events? Protests in Poland seem to go far beyond the fight for reproductive rights of women. In a country that did not undergo the sexual revolution of 1968, in which the politicians gradually gave in to the church’s pressure to entrench religious values into the legal system and consequently attempted to impose, albeit unsuccessfully, a traditional lifestyle onto a modernizing population, this moment was long overdue. The clergy and the politicians certainly designated the wrong group to be their sacrificial lamb and under-appreciated the wrath of Polish women. They seemed to have forgotten that half of the voters in Poland are women. And Polish women will not forget.