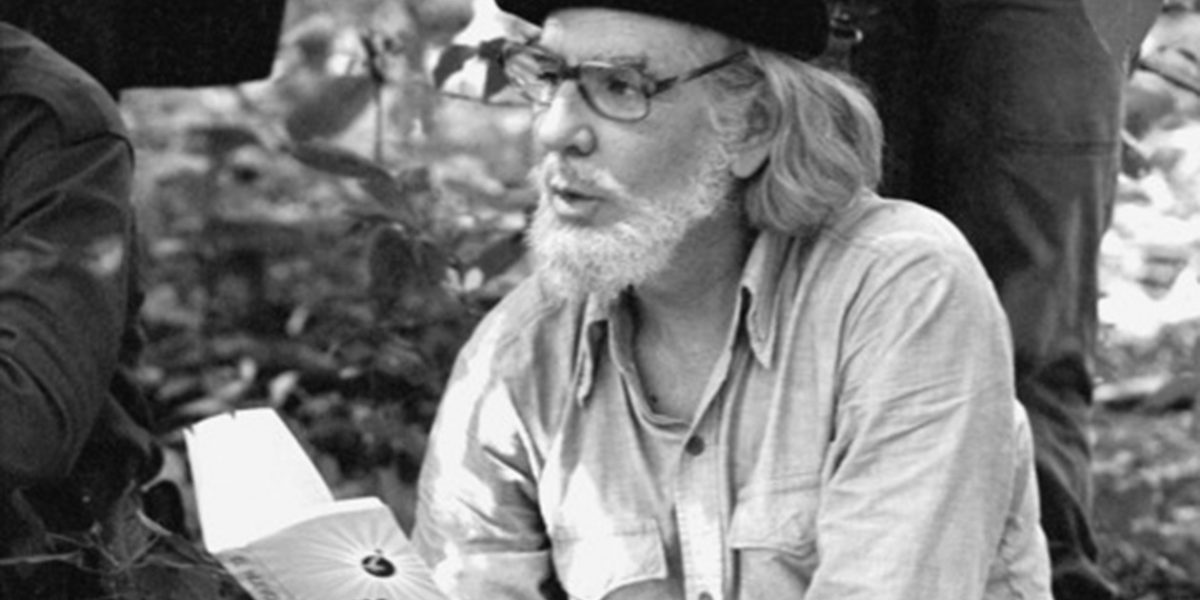 Mike Gonzales remembers Ernesto Cardenal, a priest and poet who participated in Nicaragua’s Sandinista Revolution and who died this year.

I first met Ernesto Cardenal in Managua, where he was performing his poetry in a room full of local people – mothers breast-feeding their babies, off-duty policemen, local market traders, schoolkids. They responded with delight to his flowing, almost musical, work, and to his persona – unpretentious, idealistic and dedicated to the simple life that was represented in the clothes he wore throughout his own: a peasant shirt and trousers, and a beret.

It symbolised the central theme of all his writing – the building of a community of equals.

His ideas emerged from what came to be called the theology of liberation. Where the Church had been throughout Latin American history the champion and defender of the wealthy and the powerful, represented by its mighty cathedrals, liberation theology spoke for and with the oppressed. Theirs was, as they put it, “the option of the poor”. And Cardenal was its powerful voice in Nicaragua.

Born in 1925 into a wealthy family in the conservative city of Granada, Cardenal studied in the U.S. before returning to Nicaragua. He brought with him an admiration for Walt Whitman, and for the rhythms of the spoken word in poetry, as well as for Ezra Pound, who had argued that history must always inform poetry.

But Cardenal´s country was overshadowed by a dictatorship of exemplary brutality – the three generations of Somozas dominated Nicaragua between 1936 and 1979. His early poetry, the Epigrams, exposed the dynasty – “Somoza unveils the statue of Somoza in the Somoza stadium” was the revealing title of one of them – and in 1954 he participated in a failed assassination plot against the dictator.

His great poem, Zero Hour, shaped his denunciation of Somoza into a kind of anthem:

and their bananas are slashed with bayonets

and the Mexican Trader Steamship sinks with their barges on them

and the strikers are cowed with bullets.

(And the Nicaraguan congressmen are invited to a garden party.)”

It ends by invoking the name of Augusto César Sandino, who, in 1927, raised a “crazy little army” against the U.S. Marines and their surrogates (which included the Somozas) who had occupied Nicaragua. Cardenal touts him as the prophet of a revolution to come.  In 1979, the last of the Somozas, Anastasio, was overthrown by a movement that bore Sandino’s name – the Sandinista National Liberation Front (FSLN).

Cardenal had been living in a religious community he founded on Solentiname, an island in Lake Nicaragua.

It reflected Cardenal´s interpretation of liberation theology – a religious community without the hierarchies of the official church or its formalities, and one that was rooted in the experiences of the oppressed. It was natural that the group would actively support the Sandinistas in their mounting struggle against the dictatorship. After the community was bombed by Somoza, Cardenal joined the Sandinistas.

Some years earlier (in the late 1960s), Cardenal had spent time in the Trappist community at Gethsemane in Kentucky, whose abbot, Thomas Merton, was an important poet. Although the Trappists were dedicated wholly to religious activities, Cardenal was able to write a series of meditations, published under the title Love (Vida en el amor), the last of which expressed his revolutionary vocation as a spiritual commitment. It fitted comfortably with the marriage of liberation theology and Marxism that the Sandinistas professed.

In 1979, he was appointed Minister of Culture in the FSLN government. His concept of culture focussed on the participation of working people, the peasantry and the poor in creating their own visions and expressions and in celebrating a popular culture that retained a historical memory of resistance. The Poetry and Painting Workshops he organised from the Ministry (located in an estate that had belonged to Somoza) encouraged this audience, and the gospel at Solentiname brought together the vivid, naïve paintings of the rural community and their own versions of Biblical texts.

A Christian and a Revolutionary

Cardenal was a deeply committed Christian and a convinced revolutionary. His Psalms (Salmos,1965) expressed that fusion very powerfully by relocating the psalms in the context of a world dominated by a cruel capitalism and the weaponry of imperialism. Like the originals, they spoke to the struggles of a community persecuted and abandoned – their appeal to God is a desperate recognition of their vulnerability.

For Cardenal, his religious principles, his God, pointed to “a government of Justice – a defender of the people”. In 1970, Cardenal visited Cuba and his reflections on what he saw there confirmed for him the possibility that the community of equals could be created on earth.

Yet despite his popularity, and his forging of a new democratic concept of culture, Cardenal was replaced in his post in 1988. He had represented the Sandinista project abroad and refused to be silenced by a Catholic church embarrassed by his commitment to socialist revolution.

For many people their first sight of the poet-priest will have been when in 1983 he knelt on the tarmac at the airport in Managua to kiss the ring of Pope John Paul II. The Pontiff withdrew his hand and wagged his finger at Cardenal, demanding that he immediately resign from the government. Cardenal refused the injunction and his right to practice as a priest was withdrawn (it was finally restored by Francis in 2019).

The Catholic hierarchy, whose leader in Nicaragua, Miguel Obando y Bravo, was leading the attack on the Sandinistas, could not tolerate a religious thinker for whom “Communism is the kingdom of God on earth”.

But the Sandinista leadership became equally uncomfortable with Cardenal’s public criticism of the FSLN’s authoritarianism and collusion with the right. Its leader, Daniel Ortega, used Sandino’s name to justify his relentless pursuit of power at any price, which included negotiating with Obando and the counter-revolution.

In 2008, Cardenal was arrested on a trumped-up charge. It was a futile attempt to silence him. Ortega´s persecution continued, freezing his bank accounts and expropriating his home (he was too old to be imprisoned). And as Ortega turned the weapons of his regime against protesters, Cardenal denounced the Ortega dictatorship as a return to the times of Somoza.

Cardenal’s immense body of writing celebrated the collective traditions of the indigenous communities in Homage to the American Indian and explored the synergy of the universe in his extraordinary Cosmic Canticle (1993). In the end his whole body of work is a prophecy of revolution, born not of individuals or parties but of the impulse to freedom that, for him, defined our humanity. It is impossible not to hear echoes of Blake:

“To see a World in a Grain of Sand

And a Heaven in a Wild Flower

Hold Infinity in the palm of your hand”

This is shared from Rebel