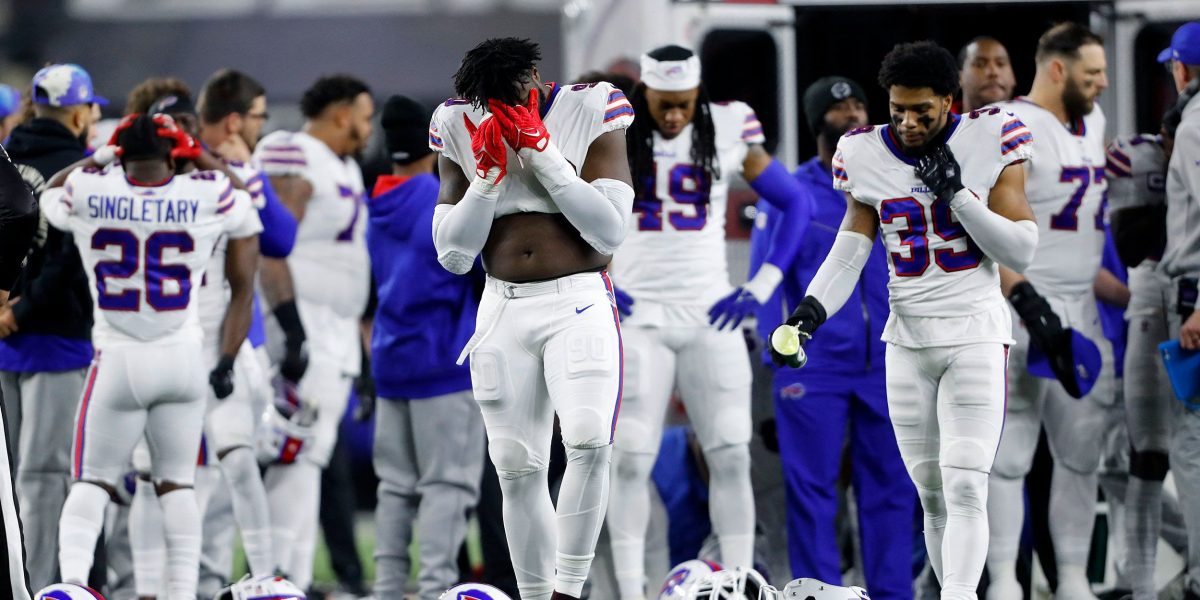 On Monday, January 2, the National Football League (NFL) game between the Buffalo Bills and the Cincinnati Bengals was suspended mid0game. It was the first time since the 1930’s such a situation has arisen. Buffalo’s Damar Hamlin made what appeared to be a routine play in tackling Cincinnati receiver Tee Higgins. Hamlin made the tackle, stood up for a brief moment, then collapsed to the ground.

Live on national television to an audience of over 23 million people, Damar Hamlin suffered a near fatal cardiac episode as a result of the play. He required nine minutes of onfield CPR and defibrillation to restore his heartbeat before he could be transferred to an ambulance.

Following Hamlin’s removal from the field, NFL officials told the players they had five minutes to return to play the game. They had just seen their friend, colleague, and coworker nearly die, with a looming understanding that it could’ve been anyone on the field.

This wasn’t a normal injury; this was a traumatic event where it was unclear if Hamlin would even survive. And the officials gave them five minutes.

Players on both teams refused, leading to what might well be the first wildcat strike in the history of the NFL.

“The National Football League is nothing without the players. That’s the only thing you got going for you, is that you’re a player and if you don’t go out there and play on Sunday, the game will not go on. 26, 35, 100 owners cannot entertain 60’000 fans and the millions of people on a Sunday afternoon – It’s the players,”

On Monday the players understood what Mr Mackey was saying and firmly said, “No, we’re not playing in these conditions.” This event serves an important reminder that an economy is meant to serve people, not the other way around. Any economy that prioritizes maintaining output even after such a traumatic near-death event is one workers should revolt over.

Many are pointing out that referees were following protocol of resuming a game five minutes after injury, but this misses the point that the protocol is the exact working condition players opposed. And while the NFL did end suspending the game, it did so after the players made their decision, independent of any permission the league may or may not have granted. The players didn’t ask nicely to not play – they said firmly that they wouldn’t and forced their employer’s, the NFL’s, hand.

A prompt medical response save Hamlin

Damar Hamlin’s heart stopped on a football field and it was the prompt response of NFL athletic trainers and medical professionals that were the ones to actually save his life. But why were these healthcare workers at an NFL game? The NFL didn’t always have medical staff prepared for gameday. The NFL is a league that is perfectly content to chew up and spit out players no matter the impact it has on their health – in 2013 they settled a $1 billion dollar lawsuit with 4500 players over their suppression of reports showing a strong link to football and traumatic brain injuries. The settlement was supposed to last 65 years but is already nearly gone, and excluded any player who died before 2006.

The conditions that resulted in players having onsite professionals for games were by and large won by the players themselves over years of struggle. The origin of the NFLPA was players in the 1950s coming to work frustrated at their working conditions. Two of their basic demands were clean equipment and athletic gear. Players would come to work and have dirty equipment to practice and play in. In 1957 players agreed on a list of demands to send to the league commissioner Bert Bell:

In other words the players were asking for a modest salary, equipment they needed for work to be usable, and paid sick days.

It may seem impossible now that NFL players had to wash their own laundry given how much some NFL players can make now, but professional athletics is an industry that is only where it is today precisely because of decades of union struggle. The concept of free agency (players signing with whichever team they want after their contract expires) was only rigorously established in 1993 after years of struggle, and it involved multiyear legal battles and a players’ strike that resulted in a shortened 1987 season. Their success, however, was a big factor in players finally receiving higher salaries.

The same resolve that everyday people show on the picket lines and in their workplaces is the same resolve that players had to tap into to fight for better pay and conditions. It was the workers’ struggle that provided the conditions that allowed frontline medical staff to save Damar Hamlin’s life. And when the NFL told the players to play on, they did what workers have done for centuries: they told their boss that an injury to one is an injury to all, and they held firm.

NFL players have gone from people working multiple jobs and asking for clean clothes to one of the most lucrative jobs in the world, and that occurred primarily through solidarity and union struggle. The doctors that were there for Hamlin were a concession workers fought for, that no billionaire NFL team owner would fork over without absolutely having to.

As Hamlin recovers, many have agreed that some things are bigger than football. Players and workers alike continue fighting for our health, our safety, our well-being. And as the Bills and Bengals showed, the workers united will never be defeated.