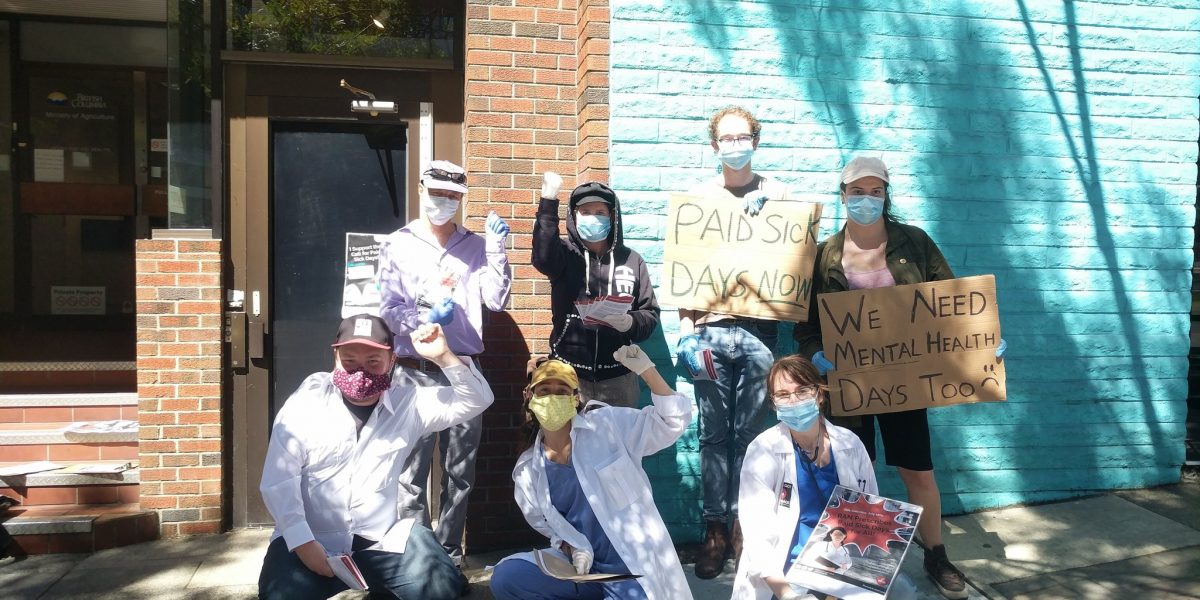 On July 18, as a part of the national day of action for paid sick days, members and supporters of the Retail Action Network (RAN) dressed as doctors and nurses and took to the streets in downtown Victoria, BC. Spring Magazine had a chance to catch up with Pamela Charron, coordinator for RAN, and talk about the campaign, the network, and next steps. You can find more info on their website, Facebook, and Instagram.

We are here in Victoria, British Columbia fighting for paid sick days with the Retail Action Network. How are you doing today?

I’m great. It’s a beautiful day and we’ve had a wonderful turnout and response so far. People are really engaging and listening to what we have to say. It’s really mobilizing to see that kind of energy.

Why is this an important thing to be fighting for right now?

It’s super important because, now more than ever and because of the pandemic, workers are having to choose between staying home if they’re sick and not being paid, not able to afford the basics, or going to work, maybe with Covid symptoms because they don’t have paid sick days. No one should have to pick between an income or their health.

What can people do to support this campaign?

We have a petition! You can go online on our website to find it and sign the petition for paid sick days. We’re also encouraging people to write letters to your MLAs, call premier Horgan and ask him to put paid sick days under the Employment Standards Act. You can also find us on Facebook and Instagram for more campaign and event info.

What is the Retail Action Network and what sort of work and campaigns do you focus on, and what can folks to to help?

Retail Action Network is a community based organization in Victoria that started in 2015 and we focus on grassroots organization for workers’ justice. We typically would help support workers when they’re dealing with grievances in the workplace. You can support the Retail Action Network by donating or investing in the solidarity fund which will help workers when they’re terminated without just cause, and are stuck without pay. As you know, we’re involved with the paid sick days campaign, but we also work with grocery store workers for better pay and better working conditions, and you find out more about these campaigns on our website.

And speaking to your grocery store campaign work, it has gotten a lot of local and national attention, how did that start?

Yes, it started at a local grocery store and they’re asking for hazard pay while working during the pandemic and also paid sick days. We were able to connect with the workers there and had an action that got some media attention. It’s a similar campaign to the paid sick days, so we hold actions, send letters to the employer, call the employer, and we’re supporting the workers with a union drive.

What are the next steps for the campaign?

There was a recent announcement a few days ago by the federal government, but it’s not good enough. They announced that they are going to provide 10 temporary sick days for workers, but only Covid related. Moving forward, we want to continue putting pressure on the government. We acknowledge that they’ve done that, but even more, they’ve acknowledged that workers need paid sick days. It’s not enough, and we know that, and we’ll keep putting the pressure on until there’s paid sick days for all workers.