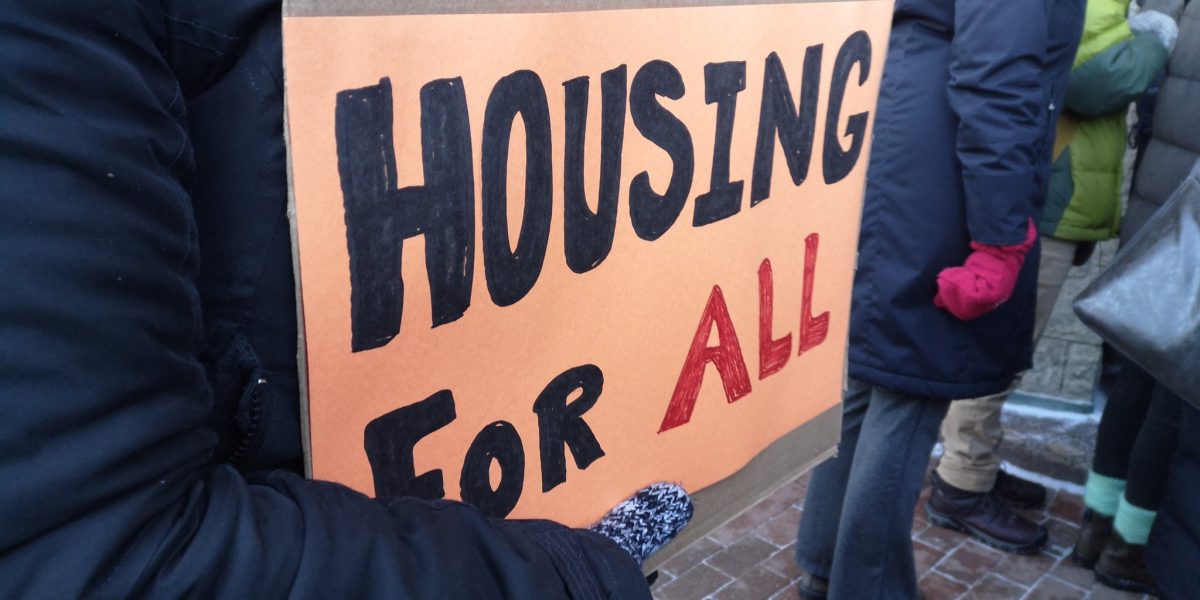 Last week marked one year since almost 300 of us stood outside of City Hall on a snowy and cold January day to rally in support of Councillor McKenney’s motion to declare a housing and homelessness emergency in the City of Ottawa. After a long, unnecessary debate on what exactly constituted an emergency, the motion passed unanimously, and Ottawa became one of the first municipal jurisdictions in Canada to pass a motion of this kind. Our City does not often lead on progressive trends so this was something we could be proud of. Since then, however, our city has done little more than exacerbate the continued housing crisis.

Instead of investing more into affordable housing and into programs that could further curb the devastating effects of homelessness, food insecurity and poverty, our City Council has decided to invest in more policing, urban sprawl and road widening projects costing taxpayers hundreds of millions of dollars. The Strandherd road widening project alone, for example, is costing the City $113 million. By contrast, in the most recent 2021 budget, $15 million was announced to build new affordable housing. The City called this investment “record-setting” in a press release about the budget; there is little “record-setting” about it.

This $15 million pales in comparison to the mammoth police budget of $376 million that makes up almost 10% of the entire City budget. Even when pressed by residents and councillors to re-allocate only the $13.2 million increase (just 3% of the entire police budget) towards more social supports like housing, the vast majority of city councillors refused.

Where we have set records has been the rise in homelessness in our city. Since the pandemic began, Ottawa has experienced a 67% increase in homelessness. According to a report from Community and Protective Services, the status quo of 90 people sleeping on the streets every night jumped to an average of 150. Additionally, the housing waitlist in Ottawa constitutes over 12,000 households, which means that the average wait time for housing is around a decade–a  statistic that should embarrass any city.

Demolishing homes in the middle of the housing crisis

Of course, COVID-19 has aggravated the housing crisis due to income and job loss. However, the pandemic is exacerbating issues that have long preceded it. A large part of the blame should fall on a city council that is not only unwilling to provide the necessary funds to address this crisis and house all residents of Ottawa, but has made decisions that directly conflict with the emergency they declared last year.

Last year, Ottawa City Council voted in favour of a plan that would see a Barrhaven line for Stage 3 LRT be built on land that would necessitate the demolition of 120 affordable housing units in the mostly low-income Nepean neighbourhood of Manor Village. Despite the existence of five other route options, councillors voted in favour of the demolition because other options presented “transit disadvantages” and were seemingly more difficult to build. The real issue in this scenario, however, was whether councillors cared enough to find alternatives for the LRT corridor; if the potential challenge and inconvenience that would result from changing the route was worthwhile in order to save 120 affordable housing units and the livelihoods of over 200 people. Clearly, it was not.

In the midst of a housing crisis where hundreds are at risk of getting evicted monthly, intensified by a global pandemic, our city council has shown us time and time again that the lives of those unable to afford basic housing are not a priority. Instead, they have shown us that “affordable housing” is little more than a buzzword and that their definition of an emergency is much different than that of our own.