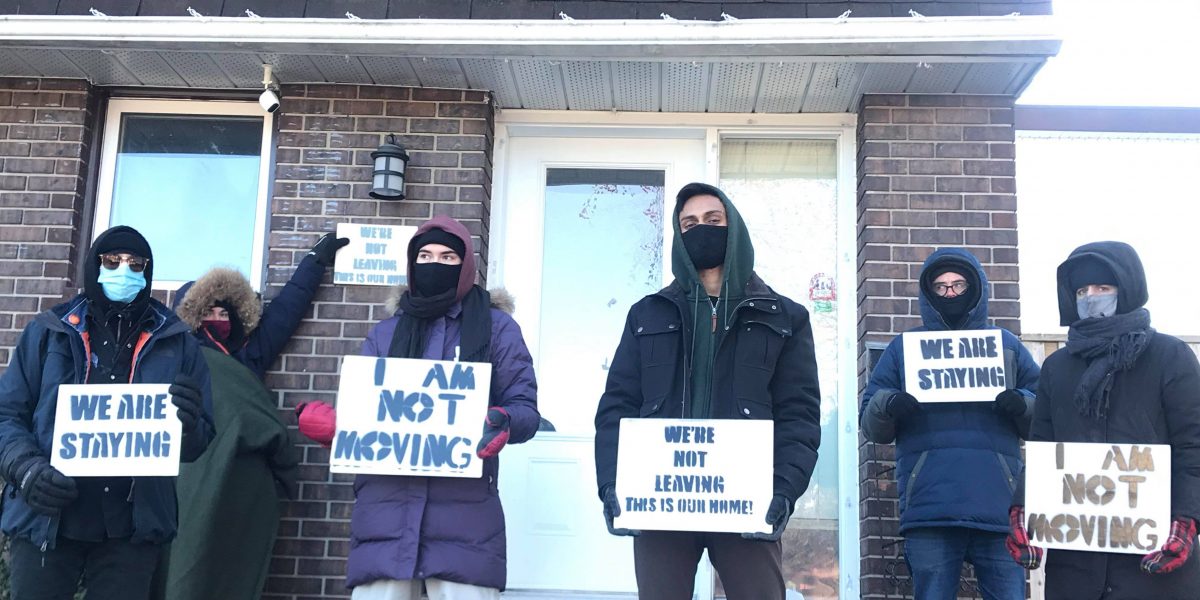 On December 29, nearly 20 Ottawa Police surrounded a grieving widow’s home and enforced an eviction order, effectively rendering her homeless in the midst of the second wave of the Covid pandemic.

In August of this year, leading up to her financial crisis, Amanda sought support from her local city councillor, Tim Tierney. She told him that her fiancé has been diagnosed with a terminal illness and she was out of work and in need of support. She explained that she had started a GoFundMe page, but had yet to receive anywhere near enough to absolve her of her debt.

Landlords and the city collaborate

Despite the ongoing pandemic and her pleading for help, Tierney ignored her requests.

Amanda explained to her supporters this morning that reaching out for help to Tierney was incredibly difficult for her and the impacts of his callous rejection had profound impacts in an already very difficult time.

Later that same week, Amanda was contacted by her landlord, Martin Bertrand (a realtor with Remax Hallmark Realty Group in Ottawa) who, unprovoked, demanded to know when she could pay him and told her that he “knew about the GoFundMe page.” The GoFundMe, at the time, had received less than $50.00 in support from a handful of donors.

What Amanda did not know until much later was that the close personal relationship between her landlord and her city councillor was taking priority over the community he was elected to support.

After months of pleading for empathy as her fiancé’s health was deteriorating, Amanda’s landlords sought an eviction order from the Landlord and Tenant Board (LTB). The hearing date was scheduled for November 10th.

Amandas’ husband died on November 9, the night before the hearing.  In this profoundly difficult time, Amanda still took the initiative to request a new date from the LTB. The request went unanswered and the Board ordered her eviction “on or before December 29, 2020”, just days after Christmas.

Community Care: We keep each other safe

A new GoFundMe page was created in order to help her reach her goal which has raised just over $7,000.00 at the time of this article.

A group of concerned community members gathered at Amanda’s home at 7AM on December 29 to prevent the eviction order from being executed. What followed, instead, was close to 20 police officers and a sheriff who attempted to physically remove community members trying to support Amanda.

While community members remained peaceful throughout, the sheriff and police backup unsuccessfully attempted to physically force their way through the barrier of people barring the door. All the while, Amanda’s landlord sat a few metres away and watched from his large SUV as Ottawa Police protected his money and forced Amanda to leave her home.

Community members even tried to engage Amanda’s landlord, pleading with him to stop the eviction order and at the very least let her stay until the end of December, for two more days. He still refused.

Ultimately, the combination of months of hardship, endless harassment from her landlord and stress due to the intimidation tactics of the Ottawa Police officers present forced Amanda to make the difficult decision to vacate her unit.

Amanda’s landlord sat a few metres away and watched from his large SUV as Ottawa Police protected his money and forced Amanda to leave her home.

The result was not what Amanda or community members who supported her wanted to see. If any positives can be drawn from this action however, it is that there is a growing movement in the City of Ottawa, and across Ontario. A movement that prioritizes community care and shows what can be possible when folks from across a City come together.