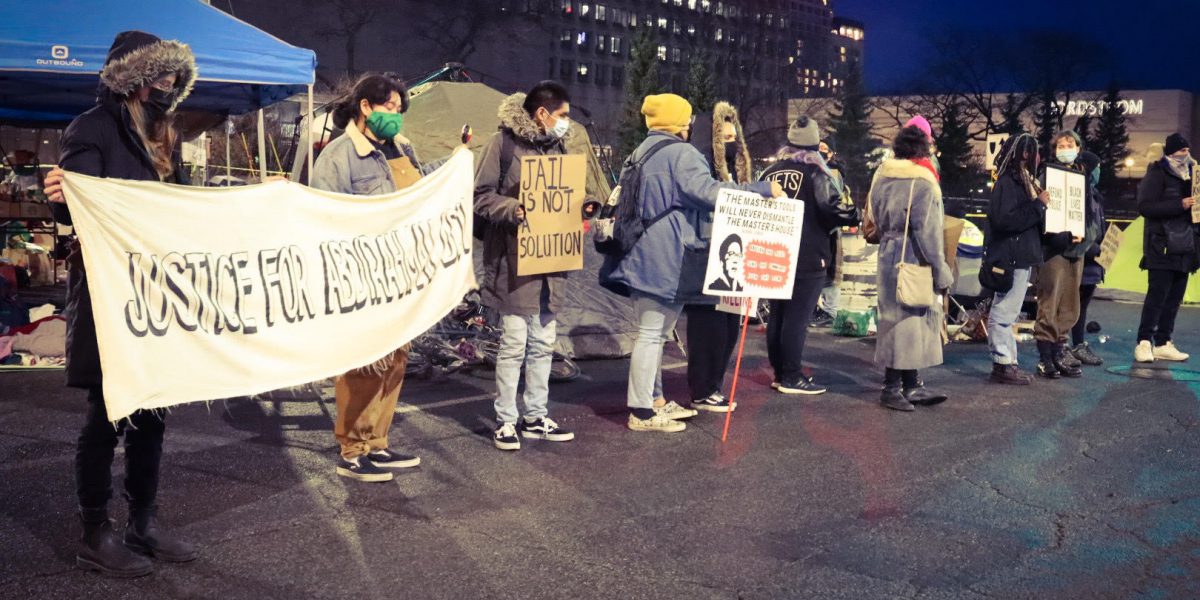 On November 24, after nearly 100 Ottawa community members presented deputations to the Ottawa Police Board demanding a “no” vote to the budget increase, the board approved a $13.2 million dollar budget increase. As Kate Noyes, an Ottawa-based community support worker pointed out in her deputation, “the decision was already made. You’re not actually listening to us.”

Emphasizing this point, Board Chair, Diane Deans, silenced the microphone of a delegate describing her experience of police violence and sexual assault, refusing to allow the speaker to complete her deputation. When the next delegate suggested that Deans return to the silenced speaker, Deans threatened that she would “move on” and silence them as well.

For the first six hours of the meeting, as community members shared their heartfelt stories, other Board Members did not appear on screen. The only signs of their presence was the sound of unmuted cell phones interrupting speakers, and the occasional tweet discounting the views of the community. After demands that the Board show their faces on screen, community members were subjected to eye rolling, finger wagging and head shaking as they attempted to communicate with the Board.

On November 19, 2020 a peaceful demonstration, Chiinawendiwin: We Are Related Day of Action, organized by the Ottawa Black Diaspora Coalition, KZ Land Protectors and Justice for Abdirahman Abdi occupied the intersection of Nicholas and Laurier on order to achieve ten demands in support of Anishinabeg and Black Lives.

After a lack of any meaningful acknowledgement from the city, Black activists, Anishinabeg land defenders, organizers and allies set up tents and held the intersection overnight.

On November 20, 2020 as they braced for a second night in the cold, the city offered a meeting to discuss the ten demands. Rightly sceptical of this offer, organizers agreed to have officials meet them at the demonstration at 10AM on November 21.  This meeting never occurred.

In the evening of November 20, 2020, on request and in good faith, organizers “allowed for a pathway for emergency vehicles to pass by” William Felepchuk, a white ally and police liaison for the action, explained at the Ottawa Police Services Board Meeting.

In what Ifrah Yusuf, Justice for Abdirahman Abdi Coalition, described as “a reckless and violent decision,” on November 21 at 3:30AM, while many were sleeping or quietly retreating to their tents, this emergency vehicle pathway was used to transport OC Transpo city busses full of police officers to the action.  These armed officers formed a militaristic line and advanced on the peaceful occupation with threats of arrest.

As many scrambled to collect their belongings, the violent arrests began.

Thirteen (12 adults and 1 youth) (4 Indigneous, 3 Black, 6 allies) were arrested and taken to the Elgin Street Police Station in downtown Ottawa. The 12 adults were criminally charged with Mischief under $5,000.00.

The Justice for Abdirahman Abdi Coalition, Ottawa Black Diaspora Coalition and KZ Land Protectors were quick to mobilize a new demonstration, this time gathered outside of the police station, demanding the release of the protesters.  Hundreds of protestors took the Elgin Street intersection, covering the streets in chalk messaging, chanting “Free Them All.”  After several hours, all were released, however the charges remain.

On November 22, 2020, emails were sent from unidentified accounts to the organizations of the action stating that confiscated belongings could be found at 29 Hurdman Road, a desolate location far from the downtown core.

Victoria Marchand, an Anishinabekwe organizer and speaker at the Ottawa Police Services Board Meeting, described watching her confiscated ceremonial objects “being thrown into the back of a city of Ottawa truck.” Marchand found her sage broken and the rest of her belongings under a tarp “beside a sandpile and a porta potty.”

In addition to ignoring the appalling and violent tactics used by the Ottawa Police to dismantle peaceful community efforts to support Black and Indigenous lives, by approving the 13.2 million dollar budget increase Ottawa Police Services Board also ignored and devalued:

While the Ottawa Police Services Board discounted Black and Indigenous voices by approving the 13.2 million budget increase, it has only fueled the movement for change in this city.

Black and Indigenous-led coalitions and their allies are becoming more organized, connected and powerful. As Jamal Koulmiye-Boyce, Former VP Academic of the Conflict Studies and Human Rights Association told the Ottawa Police Services Board: “This change will come. You will be on one side of the change. You’ll be against it or with it. For those who are against it, your time is limited.”

Donations can be made to blackdiasporacoalition@gmail.com. Use subject line Movement Fund or Legal Defence Fund.

Lydia Dobson is white settler currently residing on stolen Algonquin Anishinabe territory. She is an organizer with the Criminalization and Punishment Education Project and the Toronto Prisoners’ Rights Project and is currently completing her final year of law school.