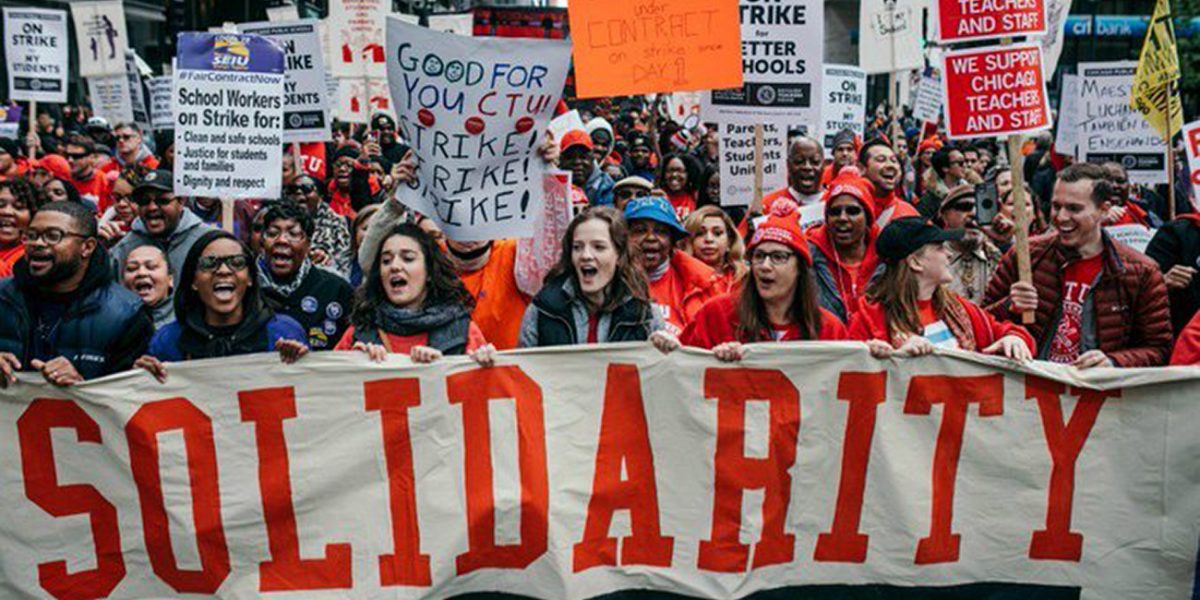 In November 2019, members of the Vancouver Tenants Union (VTU) participated in the “Organizing 4 Power” webinar series hosted by US union organizer and strategist Jane McAlevey. The webinar, hosted by the Rosa Luxemburg Foundation centered in Berlin, was attended by over 4000 union members and community organizers from across 40 different countries. McAlevey is best known for her two books: “Raising Expectations (and Raising Hell)” and the 2016 “No Shortcuts: Building Power in the New Gilded Age” which puts forward examples of organizing methods as one antidote to the four decade decline of progressive victories in the United States.

More traditionally these ideas and skills have been passed down from experienced organizers to trainees, like tradecraft, and kept within tight circles. For the few fighting labor unions that have managed to survive and even expand under neoliberalism these may not be new ideas.  But for the majority of activists brought up in the era of the anti-globalization mobilizations of the 2000’s, these hard won lessons were not passed down from from the New Left of the 60’s let alone the communist-led labor struggles of the 30’s.

The theory and practice of how to reach beyond the usual progressive crowd and build powerful, rooted organizations is just being rediscovered. Writers like McAlevey, Jonathon Matthew Smucker in his book “Hegemony How-To” and the Labor Notes organization through their country-wide “Troublemaker Schools” are bringing these ideas to a wider audience. Most saliently, these “deep organizing” methods are being put into practice in some of the most successful labor strikes in the past decade, including the massive teacher strikes in Chicago, Nevada, Wisconsin and LA. The teacher strikes were impressive on multiple levels: their sheer numbers, the unity of those participating during high-pressure situations and the fact that in many states these strikes were considered illegal and were successful anyway. How did the United Teachers of Los Angeles (UTLA) manage to get near 100% strike support and have more than 30 000 teachers and education workers stay out for seven days until their demands were met?

The organizing strategies behind these impressive wins have influenced our own attempts to turn the tide on Vancouver’s housing crisis. Rising land values and corresponding rents have made it commonplace to be priced out of Vancouver. For low-income tenants, clinging to their long-term apartments while rents skyrocket around them is the only way to stay in the city. With partial rent control, landlords in BC are only able to raise the rent by an annual allowable amount. Recently released CMHC data shows that the average rent for occupied suites are 20.8% less than unoccupied ones. Naturally, these remaining affordable units have become the target of finance capital, landlords and developers as they seek to evict and convert these to market rents and further raise land values in the region. As unions like BCGEU in the Lower Mainland have noted, many union members who have won successful annual wage increases are losing economic ground due to housing costs. For the VTU as an all-volunteer organization, it’s challenging to keep sight of an overarching strategy to build our collective power when we are mired in tenancy board dispute applications and reading city maintenance bylaws. Insights into expanding our capacity to fight mass renovictions, build tenant power and pressure city hall for better tenant protections are highly coveted. The “Organizing 4 Power” webinar was an opportunity to study these cases and consolidate some of the ideas into our own organizing at the VTU.

The words we use

The most profound lessons started right from the words we use. In a “semantics” exercise, McAlevey showed that subtle phrases commonly in use by union organizers and activists can distance workers from becoming the “actors” in labor struggles. This way of “othering” workers also plays into how many workers see their unions. Workers often see themselves as separate from the union. The relation of a worker to their union can be seen as an exchange, as an insurance policy, paid for in union dues, for when things go wrong. Workers may see “organizers” as the ones that spring into service and file grievances when the employer misbehaves. Workers and low-income tenants don’t particularly want to hear that the success of the real fight will be decided on their actions. But without harnessing the collective power of workers and their community supporters, the fight against the boss/landlord is already cut off at the knees.

McAlevey puts forward the perspective that harkens back to that of the CIO union organizers of the 1930s: that organizers are simply teachers and facilitators, but it’s everyday people who must take the central role in fighting for their own interests and liberation. So how do we have these hard, honest conversations with the people who will make or break a successful campaign? Practice, that’s it. Lots of doorknocking, lots of in-person meetings and having real and difficult conversations about what people are willing to do to win gains in their own lives. We need lots of practice helping people navigate the real risks in stepping up to fight the boss. In SEIU local 1199, where McAlevey was mentored, there exists a list of passed-down sayings that make up “Advice to Rookie Organizers” which includes the following sage advice:

Not easy advice to live by. More often than not, it is the few die-hard activists doing the lion’s share of work, with little money and few chances of leveraging real gains. To change this tendency requires a wholesale shift in thinking as well as a deliberate organizing strategy and program.

The landlord fight is the boss fight

Throughout the webinar we saw many union correlations to our experience organizing tenants at risk. During a building fight, the landlord will often employ the same tactics as the boss: landlords use fear and division to bully tenants into despair and in essence many tenants are defeated before the fight begins. During “buyout campaigns”, we’ve encountered people filling boxes with their possessions simply on the landlord’s word that massive renovations are coming. Of course legally they didn’t have to leave, and people who did saw their $900 apartments re-rented later for $1600 after cosmetic renovations.  Landlords often play favourites or sow misinformation to stop tenants from uniting against the person evicting them. It’s the classic divide and conquer tactic.

What is the antidote to fear and division? Hope, solidarity and power: all things that people must actually feel in practice through the difficult task of uniting around a common enemy that has real power over them. Trust is built by spending evenings doorknocking, holding building meetings, and facilitating tough discussions about how to proceed as a group. This is not a theoretical exercise and there are real stresses and consequences at play. When landlords and bosses have the power to disrupt your entire life, the decision to actively fight against them is not taken lightly. All the more reason to be very organized when the landlord fights back. That is what it takes to win.

McAlevey outlined key features of successful structured organizing campaigns including: high participation, a tight communication structure, and demonstrable and sustained majorities. Participants in the webinar learned about identifying organic leaders and the qualities that they present as the people capable of moving large numbers of people in their union or community to take action. We also learned about systematic ways of testing the tightness of the group’s communication and unity through a series of successive “structure tests” such as getting a large majority of workers to sign a petition to the boss, or to wear a button or sticker at work that supports a workplace campaign. In the example of UTLA’s wildly successful 2019 strike, it took no less than four years and 12 structure tests to prepare for this massive action.

What are the implications for a tenant’s union? We are currently involved in both building-level landlord fights but also in larger city or even province-wide fights for improved tenant policy. Critical to our success is trying to figure out the “universe” of who we are organizing.  At the building level it’s clear: we must reach beyond the most enthusiastic and try to win over a near majority of tenants to taking the route of fighting rather than fleeing. Often it’s only tenant leaders in the building who can convince the majority. At the city level, we can’t simply rely on mobilizing the usual suspects of Vancouver’s Left and supporters to win protections for all tenants. It’s obvious that entrenched power is stacked against us when lobby group Landlord BC can write a letter and have a city vote approving Vacancy Control for the Downtown Eastside recalled on the same day.

As was repeated in the webinar, for the working class, participation is a prerequisite to power. We’ve only seen glimpses of this, but when we have mobilized large numbers of tenants, city councillors are more likely to be swayed. Vancouver’s City Council was resoundingly put on notice last December when the VTU brought 100 supporters, many of them tenants facing renoviction, to the council chambers to tell their compelling stories and give councilors a clear choice:  Vote for what we need or there will be a political cost to pay. What is clear is that winning real gains is about power and not really about impressive speeches or pleas to morality. As Jonathan Rosenblum, staff person for powerhouse Seattle councilor Kshama Sawant stated at COPE’s recent 2019 AGM, “90% of our victory is built outside of the council chambers”.

Fighting for a place in the city

We imagine a Vancouver where neighbours have a local chapter of the Vancouver Tenants Union to seek guidance from, but where they themselves take the central role in the fightback. We would like to see tenants’ rights workshops held in familiar community spaces with simultaneous interpretation and translated materials for all language groups. We want to spread the popularity of “Building Associations” where tenants build unity, knowledge and the skills needed to win repairs and stop evictions that threaten to force them out of the city.  Building by building, we add to the universe of organized tenants who can win their own fights and can coalesce into a powerful force to push back against the developer and landlord lobby at city hall. The worst for Vancouver is not over yet, as high-tech companies like Amazon prep their new Vancouver headquarters, and Real Estate Investment Trusts (REITS) like Starlight Investments snap up buildings in Vancouver and Toronto, crowing to investors about the ‘opportunity’ provided by undervalued rentals (read; the opportunity to jack up rents once long-term tenants are evicted). A massive build-out of truly affordable non-market housing is clearly what is required and yet Mayor Kennedy Stewart’s market-based solution of luxury rentals will only add to the gentrification threats facing the region’s renters.

Despite the challenges, there is much to take inspiration from. The heroic and historic strike that UNITE-HERE Local 40 hotel workers recently won against the four biggest hotels in the city, demonstrated that organizing can take on the largest bosses in the industry and win precedent-setting gains. We can’t take on the massive economic and political power of the “Real-Estate State” by ourselves, that much is clear. To counter this offensive will likely require all the political power progressive unions and community organizations can muster. But for our part, we want to build the infrastructure for all working-class tenants to be able to fight for their place in the city.  We need to train more organizers and tenant leaders who are still determined to fight for their homes and that of their neighbours. McAlevey’s lessons are just one piece of the puzzle, but they are a powerful guide for us to build an organization that can engage the wider layer of workers and tenants needed to win real tenant power, and real reforms.

If you’re interested in tenant organizing in Vancouver with the VTU , contact our Outreach and Advocacy Team (OAT) via vancouvertenantsunion.ca to get started in your own neighbourhood.