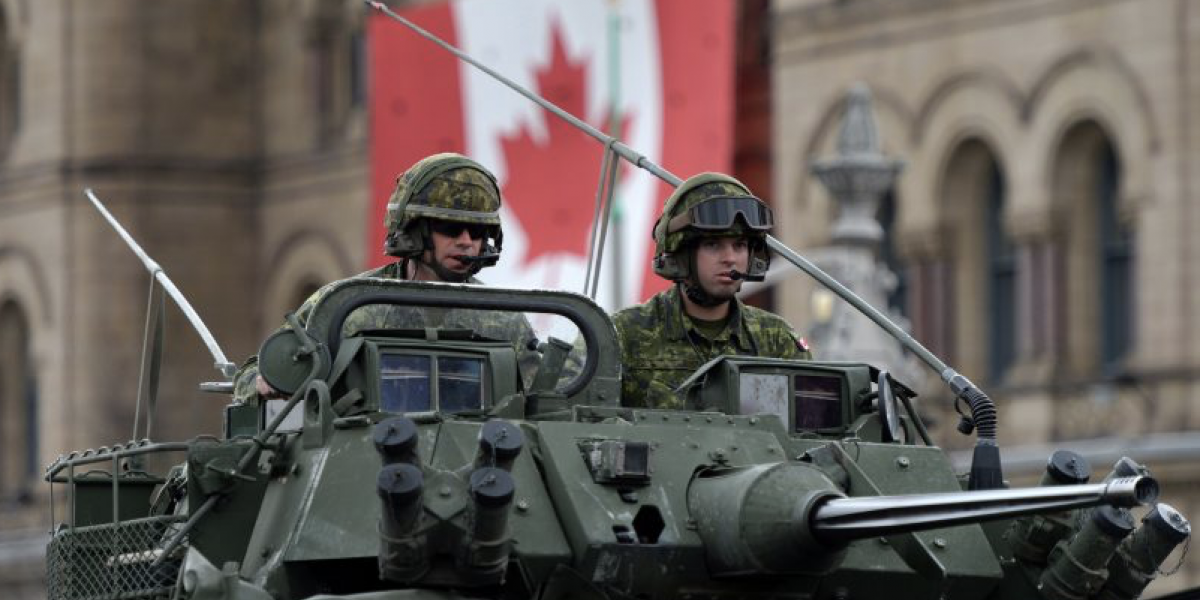 From the beginning of Russia’s invasion of Ukraine, the Canadian ruling class has consistently promoted a single, stark message: the world is now a more dangerous place, and in order to respond to this threatening reality, the Canadian military needs more money, more and better weapons, more recruits, and a larger presence in the North. Scarcely a day of the war has passed without an article or TV appearance reinforcing this message, echoed by generals and ex-generals, pundits, and politicians of all major parties. Taken together, this constitutes a formidable propaganda offensive designed to exploit the anxiety generated by the war in Ukraine in order to secure popular consent for a policy of escalating militarism on the part of the Canadian state.

This is not a completely new departure. Canadian governments both Liberal and Conservative have been increasing military spending consistently for the last two decades, and the Trudeau government has never been shy about its plans to continue doing so substantially. Much of this growth coincided with Canada’s war of occupation in Afghanistan, but was undertaken with much broader interests in mind. Military planners have followed the money as Canadian capitalist investment in the global South has grown, focusing on ensuring ‘stability’ for the extraction of wealth. This is exemplified in an under-construction network of bases which will allow for the projection of power across most of Latin America, Africa and Asia.

What is new in the context created by the war in Ukraine is the argument that Canada should have the capacity to fight a war against another advanced capitalist country. This would be a radical departure from the experience of several generations, but is not beyond possibility given the growing tension between the world’s major capitalist powers, and we cannot be complacent about the terrible possibilities this implies. Indeed, as more countries announce plans to increase military spending and expand their arsenals, sabre-rattling between the capitalist powers will become more and more dangerous.

Much of the discourse calling for increased military spending has focused on the target of two percent of GDP that all NATO countries are supposed to meet. For Canada to meet this target, $20 to $25 billion dollars more each year would have to be allocated. Even if they don’t reach this level, the Liberal government’s existing plans for increases are quite substantial. It represents a shift of social spending from social needs to the means of destruction. Instead of wasting our resources on more instruments of war we should be directing this money to address the housing crisis, to providing clean water on reserves and mitigating and adapting to climate change.

The NDP, which has signed on to any Liberal spending plans through its supply-and-confidence agreement even if it wasn’t already behind increased military spending, is arguing that there will be money for all of this as well as the war machine. Even in the unlikely event that the Liberals follow through on this rather than choosing warfare over welfare, from an internationalist perspective the bargain being proposed is unacceptable.

Taking on Canadian colonialism and imperialism

Beyond general calls to increase Canada’s military strength, the militarist propaganda offensive has focused on the need to build up the military’s presence in the North in order to counter the Russian military presence in the Arctic. This rhetoric of threatened ‘Arctic sovereignty’ reinforces a colonial view of the North, imagining the region as a theatre for conflict between a group of European and European-settler states rather than the homeland of the Inuit and kindred Arctic Indigenous peoples.

The push for further militarization of the North blatantly disregards the aspirations of the region’s Indigenous peoples, recently expressed in the Inuit Circumpolar Council’s call for the Arctic to be recognized as a zone of peace. The North is a colony within the wider structure of the Canadian settler-colonial state, and further militarization will reinforce that colonial relationship to the detriment of  Indigenous self-determination.

With the major parties and bourgeois media united in lockstep around this militarist agenda, there is an urgent need to build popular opposition to all manifestations of militarism: against increased military spending, against the arms trade, against recruitment, against militarization of the North.

While the ruling class tells us our ‘security’ will come from rallying behind them in the defensive patriotism of camps and blocs, we need to reject this and counter it with a project of international solidarity that can build ties between social movements and peoples across borders, recognizing that “There is no greater security than peace.” The socialist Left has a particular role to play in building these movements, both in organizing and in making the case within wider anti-militarist currents that the ultimate source of the danger of war is the capitalist system and that only socialism can bring genuine, lasting peace.