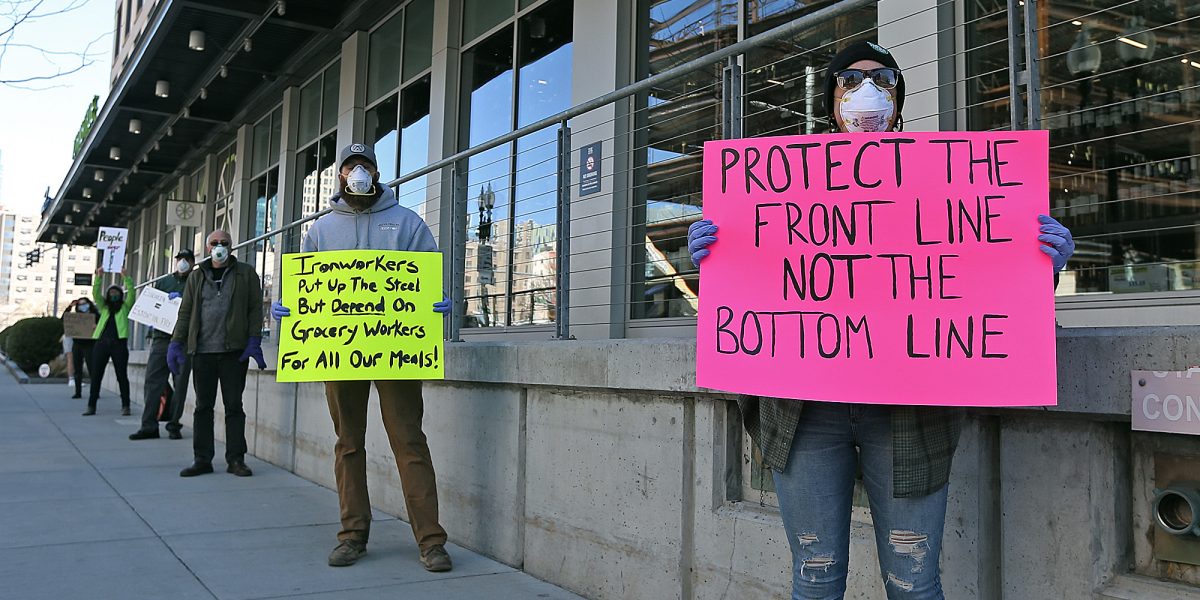 This week marks 12 months since the COVID-19 crisis hit Canada. Along with the rest of the world, day-to-day life in Canada was dramatically upended.

The beginning stages of the crisis were marked by many unknowns surrounding the virus. How was it transmitted? How deadly was it? How long would the pandemic last? And what would its impact on economic, political and social life be?

12 months later, we know much more about both the virus and the systemic failures of capitalism that fuelled the pandemic. The development and deployment of vaccines means at some point the pandemic will come to an end, However, in its wake we will be left with an intensified crisis of capitalism.

Inequality and the pandemic

The burden of the pandemic and the economic crisis has not been shouldered equally in Canada and across the world. The policies and strategies pursued by governments to deal with the crisis have benefited the rich and increased inequality. Trillions in cheap credit and direct subsidies have flooded the financial markets lined the pockets of big corporations. While the rich have gotten richer, workers are further behind. Unemployment remains extremely high, over 8% in Canada. Meanwhile billionaires the world over have seen their wealth dramatically increase.

The inequities in our society are being played out across the globe. In a competition for the vaccine, richer nations are taking a “me-first” approach, which means many poorer nations will be unable to access a vaccine for years. This is a problem for global health as new mutations could develop in areas where COVID-19 vaccines don’t exist. The for- profit approach in vaccines development, manufacturing and distribution has been an utter failure as the virus knows no borders.

Meanwhile, Canada’s already strained healthcare system struggled under the burden of COVID-19. Over 22,000 people have died from the virus. Long-term care homes, especially those run for-profit, became ground zero for mass death in the pandemic. Low staffing levels, poor pay and a systemic approach that put profits before residents and workers led to thousands of needless deaths.

How governments have chosen to address this crisis is setting the stage for the many economic and political fights to come. The mountains of debt accrued by all levels of government and by businesses is all but assuredly going to be a hot button issue for the remainder of the decade. Poorer nations, already saddled with debt issues, may be forced to default or go through painful neoliberal restructuring.

In richer nations like Canada, when the emergency phase of the crisis recedes and governments begin to pull back their supports, it will be people facing systemic oppressions most impacted. The nexus of class and social oppression demarcates the lived experience of the crisis and the ‘recovery’.

There are already signs that premiers like Jason Kenney, Brian Pallister and Doug Ford are looking to make workers pay for the crisis. In many ways they have already made workers pay with their lives and health by failing to provide paid sick days, safe schools and proper PPE  and testing. The rightwing is already looking to cut public services and, attack workers’ rights .

It should not be forgotten that the federal government will have doled out well over $100 billion dollars in direct subsidies to businesses. This doesn’t factor in the generous loans and backing of the financial system. When the system was in crisis, there was no expense too great for the Canadian state. For workers it was a different story. While many people have access to income supports, too many people are falling through the cracks unable to access adequate financial supports. There has been no rent relief, no paid sick days, inadequate access to PPE, no substantive reform of LTCs and no mass testing.

It is impossible to predict the exact shape of the political and economic struggles to come, but it is easy to see that we need powerful movements to fight for a better world. The worldwide protests against anti-Black racism and police brutality sparked after the police murder of George Floyd this past summer shows us the power of mass movements to reshape the political terrain.

The first year of the pandemic plunged the system into crisis. How that crisis played out was determined by the contours of power in our society. The economy is set to recover somewhat over the next 24 months;, who is a winner and loser in this process will be determined by the struggles to come.

Will the state try to resolve this crisis on the backs of workers by cutting public services? Or will workers force the concessions from the ruling class and employers? Will the campaigns to defund the police be successful in diverting resources from oppressive and racist institutions to much needed public investments? Will Indigenous communities fighting for sovereignty and environmental justice win long-fought battles? Will housing justice activists and tenants force landlords and the governments to strengthen protections for renters and increase investments in public housing?

These and many other struggles will be decided by our ability to build movements big enough to halt and reverse the ruling class agenda. Ultimately, these fights will determine the burning question we will be faced with: who will pay for this crisis? There will be no return to normal, but an intensification of class struggle.

Building the capacity to win

To rise to the occasion socialists will need two things:, clear ideas and organized capacity. We need clear ideas to understand and explain how society is organized and ultimately how to change it. We need organized capacity to deploy the best strategies and tactics in order to put the best ideas into action. Simply put, theory and practice are at their best when theory is steeped in and informed by practice, and when successful practice informs our theories.

We are one year into what will likely be a protracted crisis whose outcome is not yet known. If we have any chance of advancing an alternative to the rot of capitalism we need to organize ourselves as socialists, and build mass movements that speak to the needs of people and communities that are struggling through the crisis.

If you are interested in organizing alongside other committed socialists to fight for a better world consider joining the Spring Socialist Network.