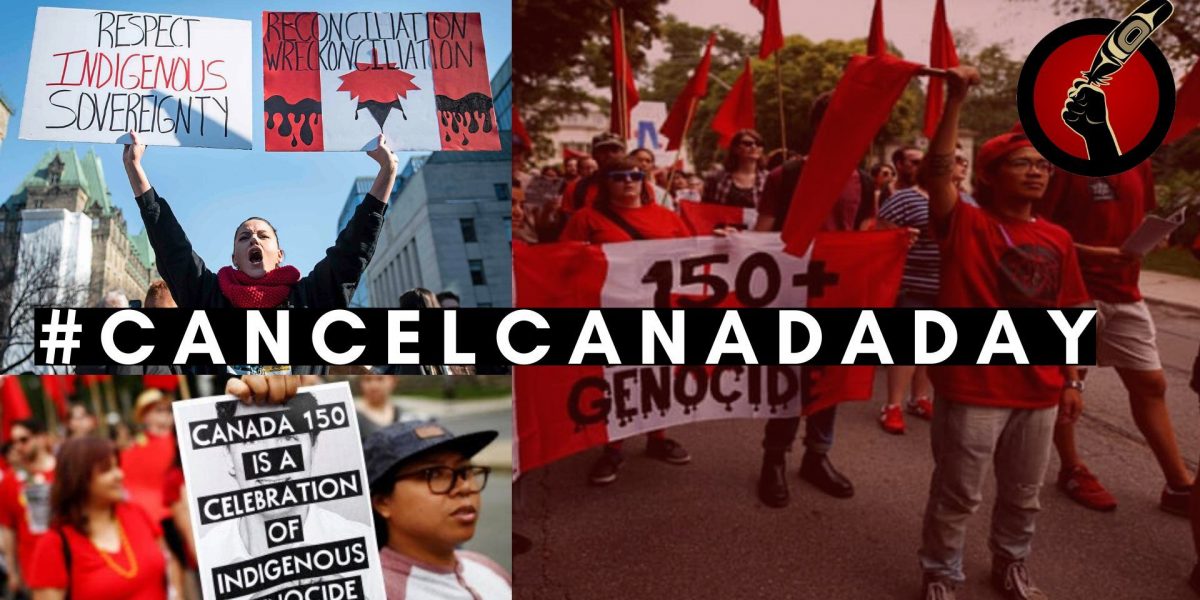 What would a world free from systemic racism and colonization look like? This is the question that Erica Violet Lee asked as Idle No More launched it’s #CancelCanadaDay broadcast from coast-to-coast. The event was part of the resistance against Canada 153 – the ongoing reproduction of settler-colonialism and genocide.

The Land Back Panel of the #CancelCanadaDay event centred conversations about Indigenous freedom and sovereignty on Turtle Island. The panel began with a video about the Wet’suwet’en, explaining how the nation is united against the pipeline by reoccupying their land and asserting their sovereignty. Molly Wickham, a member of the Gitdumden Clan, explained that the strategy of reoccupying territory is a tactical decision, and especially important because the Wet’suwet’en never surrendered or ceded their land according to Indigenous or Canadian state laws. Wickham explained that colonization has distorted Indigenous peoples relationship to the land. She rejected the argument of Crown land and argued against waiting for recognition from the Canadian state. As Wickham noted:

“Canada is founded on stolen indigenous land, the more that we start to believe that and how that happened, the sooner we’re going to start acting on that. On our territory, we have 22,000 sq km that belongs to five clans and we don’t need Canada or the province to tell us how to manage our territories.”

When justice fails block the rails

Protests and railway blockades erupted across the country after the RCMP and tactical teams invaded Wet’suwet’en land and breached the Wedzin Kwa checkpoint on Unist’ot’en territory in January. The RCMP crossed into Unist’ot’en territory with an armed caravan to enforce a court injunction that cleared the way for the building of a pipeline by Coastal GasLink (CGL). Indigenous land defenders continue to hold the Gidimt’en check-point. Since the outbreak of the COVID-19 pandemic, the RCMP and CGL have ramped up their work on the territory.

Wickham explained that even Canadians courts acknowledge that the Wet’suwet’en and the Gitxsan had never ceded their title to the land. She mentioned that the Wet’suwet’en are asserting control over their own land because they had never given up their land in the first place. Wickham said, “We are still struggling against TC Energy and the RCMP. This is just the beginning.”

Ellen Gabriel, also known as Katsi’tsakwas, is a Mohawk activist and artist from Kanehsatà:ke Nation – Turtle Clan. She was the official spokesperson chosen by the People of the Longhouse during the uprising in 1990 of the Kanesatake and Kahnawake, known as the “Oka Crisis” throughout settler Canada. Gabriel told the audience, “we have within us the ability to tell our own stories. In 1990 the media took the narrative to make it about men in masks with guns and took away the whole issue of the land. People have stolen our land and we are shrunk into smaller parcels of our land.”

She pointed out that Indigenous women have always been leaders in occupied territories, and they held a barricade in March, four months before the 78-day standoff we hear about in the media. Referring to Supreme Court decisions like Haida Nation, Gabriel said, “They talk about upholding the honour of the Crown, but the crown has no honour.”

In reasserting Indigenous sovereignties, Gabriel spoke about the necessity of learning from elders and reclaiming Indigenous languages and cultures. “As we face these challenges together, our languages will help us survive,” said Gabriel.

Vanessa Gray is a 27-year-old Queer Anishinaabe kwe from the Aamjiwnaang First Nation, located in Canada’s Chemical Valley. Gray, a grassroots organizer, land defender and educator is a co-founder of Aamjiwnaang & Sarnia Against Pipelines (ASAP). Her work focuses on decolonizing environmental justice research by connecting it to traditional teachings. She told the audience that Canada’s Chemical Valley in Sarnia, Ontario is the oldest refinery next to a community that is surrounded by pipelines and petrochemical processes.

“Canada is fundamentally invested in Chemical Valley, so much so that they use a picture of one of the facilities on the $10 bill at one moment,” Gray said. “The first residential school in Canada was in Bramford Ontario and it was commonly known as the Mushhole. A lot of the Canadian state’s colonial project originated in Chemical Valley.”

Gray linked back environmental destruction and setter-colonialism to capitalism. She noted, “Canada’s main focus is the economy even though the water and the creek that flows through the community is unsafe. There are many different types of cancers and cases of young people getting sick. The chemicals impact young mothers and birth rates.”

Gray is a lead researcher at the Techno Science Research Unit at the University of Toronto. Along with her team, she mobilizes around an ethic of Indigenous resurgence. She helped develop an app called the pollution reporter which empowers communities directly impacted by chemical industries to fill out the information in real-time and send reports to the provincial environment ministry. She also helps organise toxic tours so that people from outside the community can see, smell, and feel what it’s like to live with oil and chemical industries near Aamjiwnaang First Nation in southwestern Ontario.

“Environmental racism is felt by many communities but it all started in Anishinabbee territory and Amndanagj is still facing the brunt of so many companies at one time,” said Gray. “It’s hard for people to feel safe when you don’t what’s going to happen and from which direction.”

Speakers in Vancouver– the land of the Coast Salish peoples–Sḵwx̱wú7mesh (Squamish), Stó:lō and Səl̓ílwətaʔ/Selilwitulh (Tsleil-Waututh) and xʷməθkʷəy̓əm (Musqueam) Nations– spoke about the natural bonds of solidarity that existed between Indigenous peoples and refugees that were displaced by war and persecution, often through Canadian state complicity. As Dakota Bear explained:

“We are here to seek truth and stand up for what is right. We are not asking for justice anymore. We are demanding it. We stand in the face of our oppressors to reclaim our languages, our histories, and our futures. We are not afraid of Canada, Canada is afraid of us. Why do you think they tried so hard to relinquish our titles to our land?”

In a separate panel, Dr. Alex Wilson helped to build knowledge about two-spirit identity and history and spoke from Winnipeg, Treaty 5 Territory. Wilson is an organizer with Idle No More and conducts radical teaching to prevent the destruction of land and water.

Wilson explained that Indigenous resilience today is built upon the struggles of previous generations, yet different groups of Indigenous trans people have been uniquely marginalized, parallel to the way that the land has been extracted in different ways. Audrey Huntley of Aboriginal Legal Services spoke about the way that violence against Trans and 2spirited Indigenous communities comes from both the state and sometimes from community-based organisations.

Monica a 2Spirit Trans women of colour from Curve lake, working in Trans community for 25yrs advocating for the health and well being and inclusion. Monica affirmed that Indigenous Trans people and 2spirited people are discriminated by community agencies. They said, “we need to centre the voices of Trans people and 2spirited people about what they need from agencies meant to serve them.”