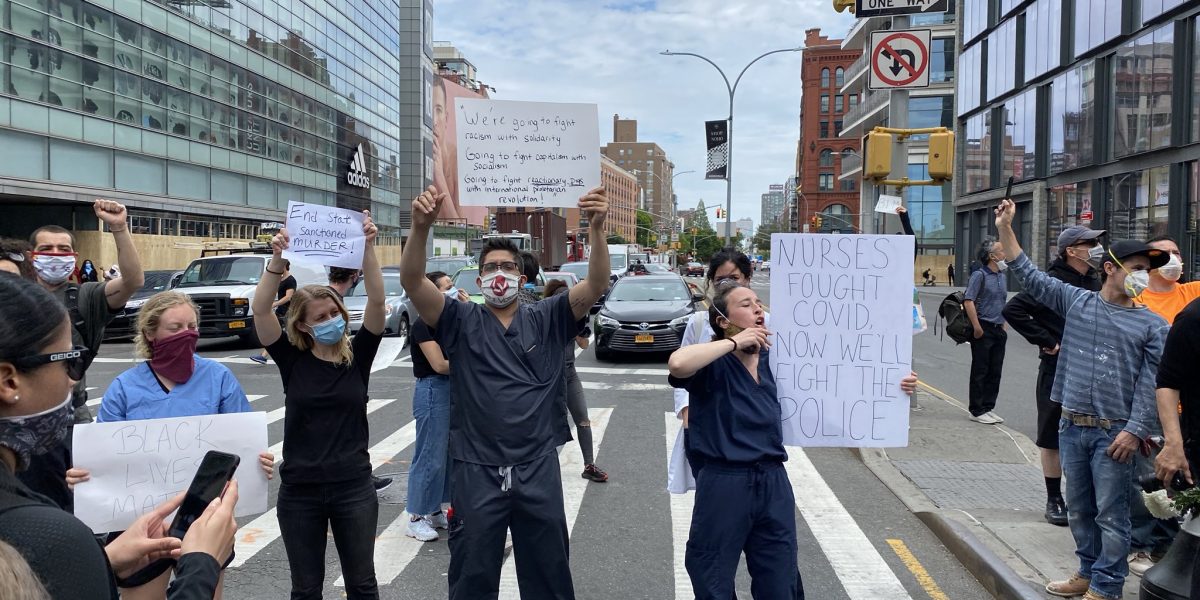 Spring Magazine spoke with Jillian Primiano, a registered nurse from Brooklyn, about her experience as a front-line worker during COVID-19, the link between racism and health, and the growing movement for police abolition.

New York was hard hit by COVID-19. Can you describe your experience during the pandemic, and how that translated into supporting other front-line workers and communities disproportionately affected by COVID and police brutality?

At end of march, early April, as PPE protests began to spring up across the city for nurses who were receiving one N95 mask every five days, seven days, none at all—I started to link up with nurses at protests who were realizing that this is not just a healthcare worker problem. And many have been involved in larger organizing, socialist organizing over a long period of time. We started to talk about how the conversation we should be having is worker protection for all essential workers. “Essential” in quotes because nobody decided who was essential except for the corporations who were hiring them.

We went to the Amazon protest, protests for camp closures outside the ICE detention centre, we went to some early NYPD protests. In New York they were brutally arresting Black and Brown people for social distancing laws, and being very friendly in the white neighourhoods. So we did a lot of activism building our idea that this is a working class struggle, that COVID is at the intersection of racism, imperialism, capitalism. And then when the protests [after the murder of George Floyd] started coming out of New York we’ve been out all the time, we’ve seen a lot of other healthcare workers on the street.

The pandemic has disproportionately affected Black people—from health outcomes, to the policing of social distancing. How does racism affect health, and what links do you see between the pandemic of anti-Black racism and the pandemic of coronavirus?

Racism and capitalism and health outcomes are all intertwined. Having to do with access to the healthcare system, having to do with resources in our hospitals. My hospital is greatly under resourced, and we serve a very needy community. During COVID the very fancy Manhattan hospitals had life saving equipment that we don’t even have, they received staffing that we never got. So COVID outcomes for Black and Brown people is not just about their pre-existing conditions—which are linked to capitalism and racism and food desserts and access—but they’re also linked to the resources available at the hospitals serving their communities.

And they’re also linked to essential work: 70 to 80% of essential workers in New York are Black and Brown. So that also adds to the COVID racial disparity. People had to go to work, and quitting doesn’t give unemployment insurance so they had to keep going to work despite the fact they weren’t allowed social distancing at work, they weren’t given sick time, they weren’t made aware when other people in their work environment were sick. The disparities with COVID have a lot to do with how people are reacting right now [to police brutality], and it’s all so intertwined.

The worst COVID outbreaks—in Canada and in the US—are workplaces that deny basic protections and prisons that prevent social distancing—all of which disproportionately affect racialized communities. Yet some media are blaming the Black Lives Matter protests for spreading coronavirus. Why is it important to protest anti-Black racism, collectively in the streets, even in the midst of the pandemic?

Because anti-Black racism was a huge fuel for the pandemic. Fighting COVID is fighting racism, it’s the same thing. And the amount of PPE that protesters are wearing marching outside is the same amount the CDC [Centres for Disease Control] recommended for nurses in the middle of COVID. They told us to put a bandana over our face—that’s what a lot of protesters are doing. I haven’t seen protesters without masks. When you’re protesting you’re not touching any of the same things, you’re wearing masks, you’re not standing that close together. When the cops without masks beat people face to face, and then lock them up in jail and take away their mask, I feel like that’s worse than marching outside, not touching anybody, wearing a mask.

While hospitals are understaffed and underequipped to help people heal, the police have an overabundance of numbers and equipment to cause harm. The pandemic has highlighted this contradiction, and contributed to raising the call to defund the police. What would defunding the police mean for frontline health workers and the health of communities?

You made a sign that said, “Nurses fought COVID, now we’ll fight the police”. What’s the connection between nursing and anti-racism, and what motivated you to make that sign?

Nursing is a working class job. Nursing is a very multi-racial profession, serving multi-racial patients. Nursing itself is a population who wants to care for other people who have experience with racism, imperialism and capitalism. Healthcare has a lot of problems with racism, but overall people trust healthcare providers, especially nurses. We’re been called heroes for months now, which in my opinion was lip service. The CEO or corporation will call you hero, but they won’t give you what you need to do your job, they won’t give you crisis pay, there’s chronic problems of understaffing and disrespect in our profession. People are continuing to get laid off and furloughed, including nurses. If you’re going to call us heroes, we’re going to use that status they gave us to reflect back what we actually see and know are the chronic problems in our society, and treat them. The people I’m working with, we’re sincere: we will fight the police, we will not quit until we see police abolition.

In a few months Americans will have an opportunity to vote against Trump. But this is in the context of major crises of economic inequality, climate change and racism that go far beyond the ballot box. What are the prospects for change in November?

Joe Biden is running for president. He’s a class enemy as well. New York is run by a Democrat mayor, a Democratic governor, and look what they did to us on the street. They beat everybody. A bunch of us healthcare workers were arrested last week, including me. I don’t have any faith in a capitalist candidate, I don’t think that’s going to solve any of our problems. Trump is not the only enemy, he’s just more flamboyant and more flagrantly racist. If we focus too much on Trump, it takes the spotlight off other people who also deserve to be in hiding.

What kind of alternatives do we need to fight for before and after the election?

The start of defunding on a more massive level than one billion dollars would be a great start in New York. Police unions are a good target of abolition, to take power away from the police. Medicare for all as a starting point to a worker owned healthcare system.

Spring Magazine is a publication of socialist ideas in action.