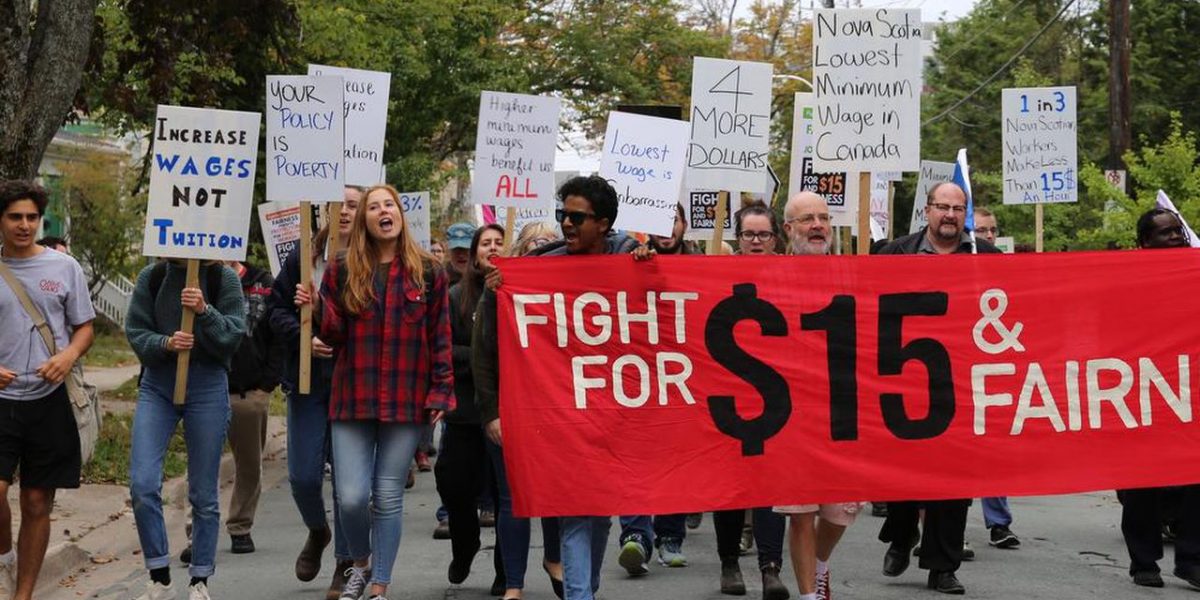 Today, April 1, the Nova Scotia Government raised the minimum wage by 40 cents to $12.95 per hour. Although this is one of the largest provincial minimum wage increases in decades, it falls far below the cost-of-living province-wide and is nowhere near what Nova Scotians require to make ends meet.

Credit for the minimum wage increase is in large part due to the Fight for $15 and Fairness campaign in Kjipuktuk/Halifax, a grassroots movement that champions higher wages and improvements to provincial labour standards.

According to Nova Scotia’s 2020 Living Wage Report by the Canadian Centre for Policy Alternatives (CCPA), a liveable wage is “calculated to show exactly how much a household would have to earn to cover all basic necessities and allow families to live in dignity and enjoy a decent quality of life.”

A livable wage, according to the CCPA report, is one which would allow families to avoid financial stress, support healthy child development, and allow families to participate in the “social, civic and cultural lives of their communities.”

Members of marginalized communities are more susceptible to poverty and overrepresented in minimum wage employment. According to the 2021 Nova Scotia Minimum Wage Review Committee Report, 62% of Nova Scotia’s minimum wage earners are female. According to the Conference Board of Canada, white Nova Scotians earn approximately 7.3% more than people of colour. This disparity is compounded by gender, with a “female racial wage gap” of 11.2% in the province.

The ever-increasing cost of living, combined with inadequate wages, have no-doubt contributed to growing provincial rates of homelessness. The number of people experiencing chronic homelessness has more than doubled in Nova Scotia since 2019. 22% of our homeless population claim Indigenous status, which is staggering given that Indigenous peoples make up only 7.5% of the provincial population according to Statistics Canada.

Although it is well known that the cost of living far exceeds $12.95 per hour, members of Nova Scotia’s Minimum Wage Review Committee voted unanimously to increase the provincial minimum wage by only .50 cents per hour this year.

With skyrocketing rental prices and an ever-increasing cost of living, the struggle of working Nova Scotians has been overlooked.

“We have to ask ourselves how many decision makers actually earn minimum wage?” says Scott Randell of Nova Scotia’s Fight for $15 and Fairness Campaign.  “If not, how many are standing alongside our minimum wage earners, in solidarity, and advocating for them and their needs?”.

Randell says that the minimum wage increase is laughable. “It is fitting that this 40-cent increase has come into effect on April Fool’s Day, because $12.95 an hour is a joke” he says. “These are poverty wages. Nova Scotians deserve better.”