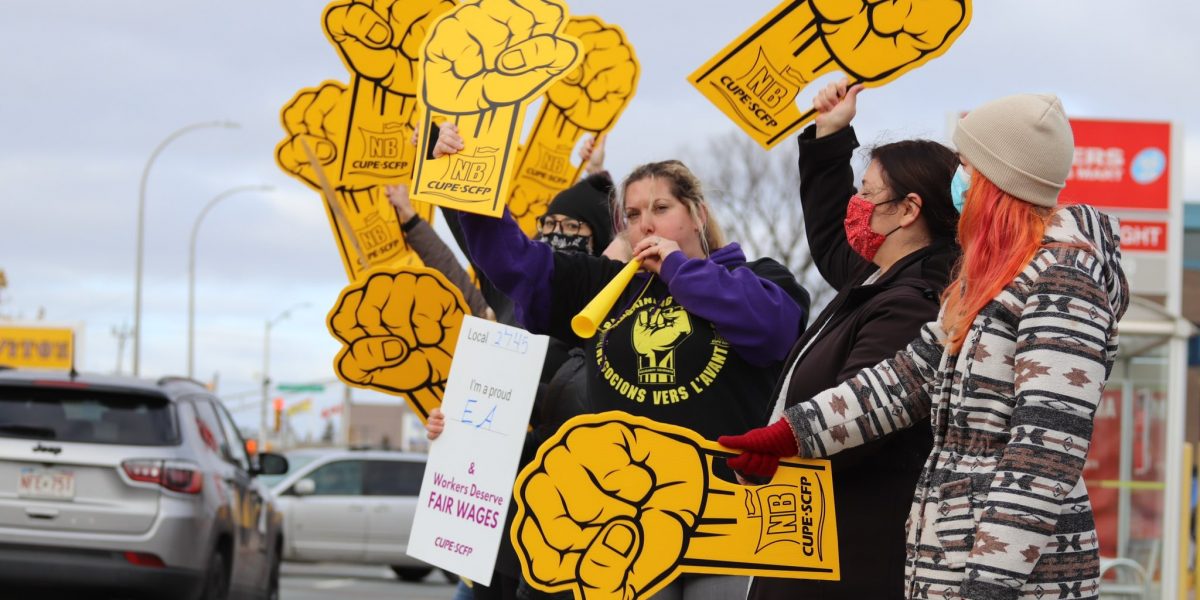 22,000 public service workers in New Brunswick are on strike. The school bus drivers, custodians, mechanics, healthcare workers in rehabilitation and therapy, educational support staff, transportation and infrastructure workers and community college workers that took to the picket lines on October 29 are members of the Canadian Union of Public Employees (CUPE).

Striking frontline workers are fed up with not being properly compensated for their labor. The COVID-19 pandemic has only exacerbated many of the inequalities that exist in New Brunswick. Frontline public workers that saw the province through the pandemic are feeling drained and underappreciated.

After Blaine Higgs’s Conservative government denied the union’s request for a 12 percent raise over four years CUPE decided enough was enough and went on strike. The government was offering an 8.5 percent wage increase over a five-year period, despite the fact that inflation is hovering at about 4.4%. The below inflation wage increases the government put on the table was in effect a wage cut for a public sector workforce that is one of the lowest paid in the country.

While housing costs and prices of basic goods soar in New Brunswick public sector workers have not had an adequate raise in over 15 years. To put it simply, the cost of living is increasing yet the wages are increasing at a snail’s pace. This means worsening inequality in a province notoriously ruled by the Irving oligarchy.

Higgs’ government had no problem in finding the money to give away to the rich and powerful. The province essentially gave away $200 million in timber royalties to big lumber companies during the pandemic, by charging less than the market rate for timber. The government has also handed over $100 million in subsidies to six pulp and paper mills in the province. Higgs, a former Iriving executive, has remained committed to giving Irving generous tax breaks.

Premier Higgs claimed he wanted to work with CUPE strikers, yet he’s prepared to take “legal action” against them to order the various strikers back to the status quo and back to unfair working conditions.

Higgs went as far to blame strikers for targeting the healthcare system by striking, claiming their actions “will cause pain and harm the safety and security of New Brunswickers,”. Meanwhile, the ex-New Brunswick NDP leader turned Conservative cabinet minister Dominc Cardy blamed the union for ruining Halloween for the province’s public school students.

But if Higgs, Cardy and the rest of the Conservative caucus is looking to blame anyone then they should look in the mirror. The government is running a fiscal surplus of $38 million in the middle of the pandemic, a time when most governments across the country (and around the world) are taking advantage of low interest rates to engage in deficit spending to boost the economy. The current provincial surplus is more than enough to pay for the workers’ wage demands.

Instead of lifting up New Brunswick workers by meeting the unions wage demands, the Conservatives have said they are willing to drop the legal hammer on the striking workers. Higgs has said he is willing to trample on workers’ rights and livelihoods by passing back-to-work legislation to end the strike.

The New Brunswick strike is about more than just wages, it is about who shoulders the cost of the pandemic. It is fundamentally about what kind of province we want to live in post-pandemic. One where we value public services and public sector workers or a province where the rich get richer and workers continue to struggle to make ends meet.