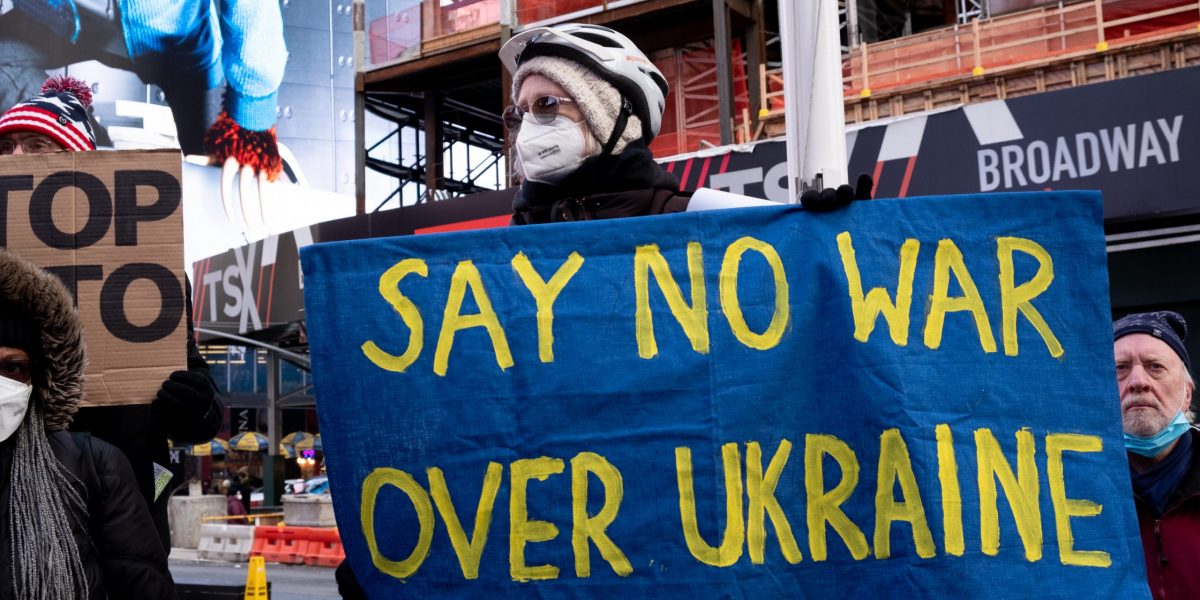 Those across Canada who would like to support a progressive political party working for peaceful solutions to military conflicts are being pushed out of the New Democratic Party.

Instead of advocating for diplomacy, the NDP has long pressed for conflict with Russia. They’ve consistently supported measures that escalate tensions in Ukraine and have prodded the government to be more aggressive.

NDP leader Jagmeet Singh backs Canada delivering heavy artillery to fight Russia, which is waging an illegal and brutal war. “With the violation of human rights (in Ukraine), we support the decision to send the necessary tools”, Singh responded to a French language question about Justin Trudeau’s announcement last week that Canada would send heavy artillery. Two weeks earlier the party backed a budget that earmarked a half billion dollars for arms to Ukraine (in addition to over $100 million worth of “lethal” weapons announced and delivered since the end of February).

At the same time, the NDP has said little about the need for Canada to support negotiations between Ukraine and Russia. Nor has the party pushed for debt forgiveness for Ukraine.

How far the NDP will go in backing escalatory measures is anyone’s guess. Considering what’s transpired in recent weeks it’s not hard to imagine the party endorsing the deployment of Canadian troops or even more brutal weaponry that could escalate the conflict into a nuclear war.

Prior to the explosion of hostilities, the NDP sought to escalate tensions and has long demonized Russia. A year ago, deputy foreign affairs critic Heather McPherson criticized the government for not pushing harder for Ukraine’s adhesion to NATO. Asked by Ukrainian-Canadian media outlet New Pathway whether the NDP “support Ukraine’s bid to join the MAP [Membership Action Plan] program and advocate for this with our NATO allies” McPherson responded: “The NDP will continue to strongly support Ukraine’s bid to join the MAP program and we have and will continue to push the government to advocate for this with our NATO allies. That Prime Minister Trudeau and [Foreign Affairs] Minister [Marc] Garneau have been unwilling to explicitly state their support for Ukraine’s bid and their failure to adequately support the bid via advocacy efforts and multi-lateral diplomacy is very disturbing.”

In their anti-Russian zeal, NDP representatives also flirted with the hard right. At a 2014 Toronto event NDP MP Peggy Nash shared a stage with a speaker from Ukraine’s Right Sector, which said it was “defending the values of white, Christian Europe against the loss of the nation and deregionalisation.” For her part, Ontario NDP MPP Cheri DiNovo attended a Ukrainian parade in Toronto where some marched behind a banner titled “Right Sector Canada”.

While they pushed to militarize and NATOize Ukraine, the NDP largely ignored Canada’s role in the 2014 coup that led to Operation Unifier. The party echoed the Stephen Harper government’s position on the unconstitutional ouster of elected President Viktor Yanukovych. A week into the November 2013-February 2014 Maidan protests foreign affairs minister John Baird visited Maidan square, calling on Ukrainian authorities to respect the protests and bemoaning “the shadow that Russia is casting over this country.” On January 27 NDP Leader Thomas Mulcair explicitly supported Harper’s position on the growing conflict. “The government is signaling its strong desire for Canada to play a positive role, and we encourage them in that regard,” Mulcair told the House of Commons. “It is a battle about human rights, it’s a battle about democracy, it’s a battle about the future of that important country.” The NDP also demanded sanctions against members of Yanukovych’s government.

The day after Yanukovych fled, NDP MP Olivia Chow told a Euro-Maidan Canada rally in Toronto, “we must be vigilant, we must ensure our government, our Canadian government, continues to keep an eye on the Ukraine to make sure that the Russians do not interfere.” But the NDP MP wasn’t bothered by Canadian interference in that country. Immediately after Yanukovych was elected – with a mandate to support Ukrainian neutrality – Ottawa sought to undermine him. The Harper government supported opposition groups and repeatedly criticized Yanukovych. During the Maidan rebellion against Yanukovych the spokesperson for Canada’s Embassy was a leading opposition activist and protesters, including members of far right C14, used the Canadian embassy in Kyiv as a safe haven for over a week.

During this period the NDP made numerous statements criticizing the Yanukovych government for violence. On February 18, 2014, the party released a statement headlined “NDP condemns violence in Ukraine”. In it, foreign affairs critic Paul Dewar noted, “the use of repressive force by Ukrainian security forces is entirely unacceptable” and the NDP called “on the Conservative government to impose targeted individual sanctions against those Ukrainian officials most responsible for the democratic and human rights abuses.”

But University of Ottawa professor Ivan Katchanovski has shown that many of the killings blamed on the government were likely perpetrated by the far‐right. Despite pro-Maidan forces having control of the country since 2014, no one has been found guilty of the sniper executions blamed on Yanukovych at the time.

After the coup the NDP ignored a wave of right-wing violence targeting those viewed as “pro-Russian”. In the worst incident, 42 were killed in a fire at the headquarters of the Odessa federation of trade unions on May 2, 2014. Neo-Nazi “Right Sector” militants sequestered “anti-Maidan”/pro-Russian demonstrators inside and 40 people choked to death on smoke or died jumping from the building.

I searched in vain for any NDP statement on the massacre in Odessa. Same for the Minsk accords, which sought to end the fighting in the Donbas.

Negotiated by France, Germany, Russia and Ukraine, the Minsk agreements were designed to overcome the violence and division caused by the ouster of Yanukovych. Minsk I and II proposed a more federalist Ukrainian politics, which Canada effectively subverted. In February 2015 NDP foreign affairs critic Paul Dewar called the second Minsk summit an “important opportunity to de-escalate, save lives and protect Ukraine’s territorial integrity.” But, I was unable to find any mention of Minsk II afterwards.

While the NDP has been largely uninterested in the United Nations Security Council-endorsed accord, they repeatedly expressed support for sanctioning Russia. During the 2015 federal election leaders debate Thomas Mulcair said, “with regard to Ukraine, yes, Putin is a danger. We stand firmly with Ukraine against the aggression by Russia.” The NDP leader also reiterated the party’s call for harsher measures against Russian officials, naming two businessmen whom he said should be added to Canada’s list of Russians targeted for sanctions. In March 2014 NDP foreign critic Paul Dewar released a statement calling for “travel bans against certain Russian officials and suspending trade with Russia’s military sector.” Five months later the NDP put out a press release under the headline “Conservatives shield Russian business elite from sanctions: Toothless sanctions are out of step with Canada’s closest allies.” In 2017 NDP foreign critic Hélène Laverdière applauded a bill modeled after the US Magnitsky Act that would further strain relations between Ottawa and Moscow by sanctioning Russian officials. NDP MPs voted for legislation Laverdière labelled an “important step to support the Global Magnitsky movement.”

In summer 2016, NDP defence critic Randall Garrison expressed support for Canada leading a NATO battle group to Latvia as part of a ratcheting up of tensions with Russia. Four hundred and fifty Canadian troops were deployed to head up a 1,000-strong NATO force in Latvia while the US, Britain and Germany headed missions in Poland, Lithuania and Estonia. As vice-chair of Parliament’s Standing Committee on National Defence, Garrison endorsed a December 2017 report titled “Canada’s support to Ukraine in crisis and armed conflict.” It denounced Russia’s “war of aggression against Ukraine” and lauded Canada’s “support of Ukraine in its fight against Russia.” The report also quoted the head of the right-wing Ukrainian Canadian Congress, Paul Grod, saying Minsk II was “stale-dated” and would never be implemented.

We need peace not imperialism

The NDP’s demonization of Russia is long-standing, predating that country’s “seizure” of Crimea or invasion of Georgia. In an August 2007 letter to Prime Minister Stephen Harper then leader Jack Layton played up the Russian threat in the north. “The Russian mission to place its flag on the ocean floor at the North Pole demonstrates a troubling reality for northern communities and all Canadians concerning Arctic sovereignty,” wrote Layton. Three years earlier Layton mocked the Liberals’ climate policy by saying “we’re seeing more progressive moves right now from the President of Russia.” Throughout the Cold War the NDP participated in anti-USSR/Russia hysteria.

The NDP’s support for Canada’s position on Ukraine/Russia is troubling, but it’s not out of character. Prior to the recent federal election, the party explicitly supported the Core Group of foreign ambassadors largely determining Haitian policies. In 2019 they backed Ottawa’s bid to overthrow the Venezuelan government. Until a year ago they were anti-Palestinian. In 2011 the party supported NATO’s bombing of Libya. The NDP’s predecessor, the CCF, immediately supported the horrific war in Korea and creation of NATO.

The NDP has promoted policies that helped precipitate Russia’s brutal invasion. A party for peace would stop escalating tensions and push for a negotiated end to the horrors.