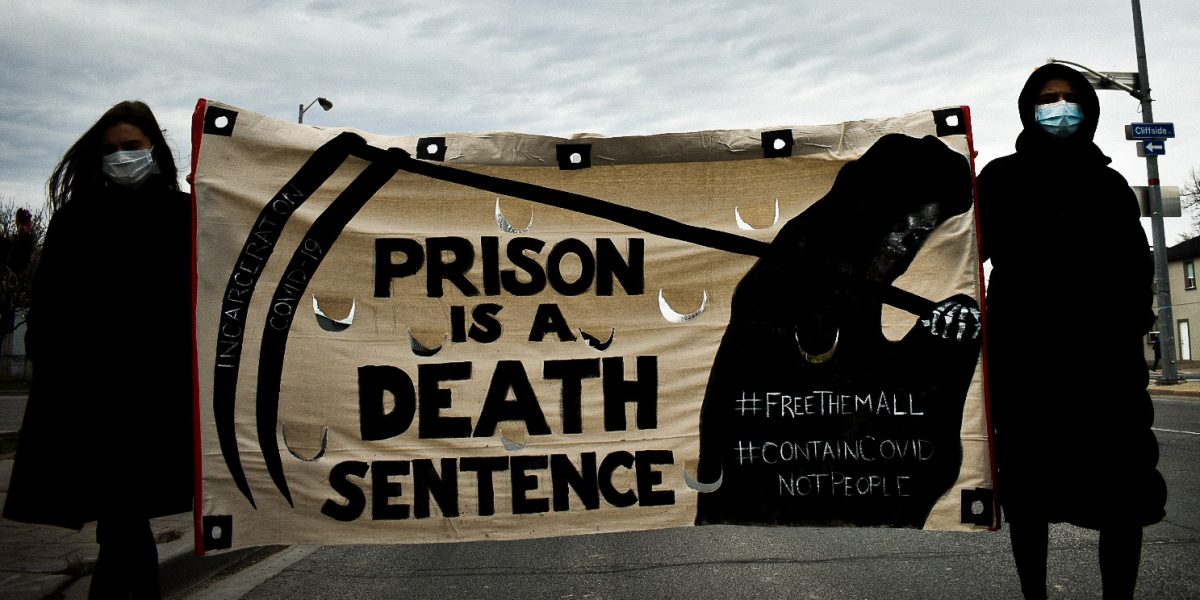 March 20, 2021 marks one-year since the first prisoner contracted COVID-19 in Ontario. Since the first positive case was diagnosed, prisons and jails across Canada have been the site of a deepening crisis in human rights and healthcare.

As of March 11, 2021, there have been 6,713 COVID cases linked to Canadian carceral institutions. 4,971 of those cases are prisoners, and the threat of a third wave of COVID-19 inside looms large. While the first wave of the pandemic saw some decarceration in jails and prisons to curb the spread of the virus, these efforts were not sustained in the long run. The pandemic has worsened in jails and prisons over the last year.

Government continues to contain people, and not the virus.

Groups like the Toronto Prisoners’ Rights Project have received dozens of calls from prisoners describing an utter lack of regard for their safety: A consistent lack of PPE and inadequate or denied access to sanitation resources. Prisoners are forced to make their own PPE, while prison administrators ban those desperate efforts to stay alive by labelling PPE contraband.

Instead of safe decarceration as a response to COVID-19 and despite the governments’ own mandate to keep prisoners safe, people continue to be caged without safety measures urged by the World Health Organization and Public Health for congregated populations.

The inability to socially distance in overcrowded, often double bunked cells, has led to inhumane forms of enforced ‘distancing’ through mechanisms like medical isolation and prolonged lockdowns. In order to control active outbreaks within our provincial institutions, the Ministry has closed jails for new admissions, which results in the transferring of prisoners to other institutions across the province. These transfers are a major contribution to the increase of active COVID outbreaks amongst the jails. Prisoners are housed with other prisoners tested positive for the virus, while daily testing is denied by the administration. The administration confine prisoners to their cells for weeks, cut off from their community, denied social and legal support to further their release.

Our anxiety for those caged behind the walls is met with little accountability by prison administrators. Prison officials have suspended family, friends, and community members–along with legal support–from visiting incarcerated people. With limited access to phones stemming from prison wide lockdowns, the outside world is shut off from the crisis blazing through federal and provincial institutions during the lockdowns. Both institutions and the government have hidden the reality of COVID outbreaks amongst prisoners and staff.

We are left in the dark. We do not know if our loved ones are sick or even recovering from the illness. Without prisoners telling us their stories, advocacy groups like ours in Toronto or other groups like the Criminalization and Punishment Education Project (CPEP) could not picture the reality of the pandemic inside prisons.

The denial of information disclosure intensified the urgency of establishing the Toronto Prisoners’ Rights Project’s Jail Hotline, a connection for incarcerated people Toronto South, Vanier, Maplehurst, and Toronto East. Prisoner advocacy is essential at this moment – our only source of knowledge is prisoners themselves. We must amplify their voices while recognizing the gaps in information-sharing arising from censorship, a form of denial, an echoing silence that cannot be disassociated from the centuries long process of settler-colonial violence like those in residential schools.

We are further reminded that prisons are the settler state’s response to systemic issues, including the pandemic itself, that continue to disproportionately harm Black, Indigenous, racialized, disabled, trans, queer, elderly, poor and other targeted communities. It is no surprise that it is the same communities across the board who have been rendered particularly vulnerable to the pandemic. Rather than creating systemic inequities including carceral harm, the pandemic has unveiled and exacerbated them.

The real pandemic is prisons

Prisoners are fighting back. On the heels of another outbreak, prisoners at Maplehurst organized another hunger strike and demand access to PPE and daily showers. Prisoners decided to end their hunger strike because the government and institution refused to negotiate in good faith. Prisoners have organized many other hunger strikes as one of the only peaceful tactics available to them to organize against the inhuman conditions they endure on the inside.

The second wave swept through institutions across Ontario:

We launched a Prisoner Emergency Support Fund to distribute stipends to support people inside as well as those released during the pandemic. However, because of the structural violence imposed by incarceration, the fund has become a permanent part of our advocacy as calls for support continue to pour in. These demands and calls for support tell us that it is not the pandemic that is the crisis per se, but prisons themselves. We are reminded that prisons represent the practice of severing people from their families, communities, and lands, and placing them in cages where they are subjected to egregious human rights violations. Recently, the public was shocked to learn about “social experiments” orchestrated by correctional officers who place rival gang members, often Black or Indigeneous, in the same jail units to ‘observe’ what transpires.

Prisoners are not just living in fear of getting COVID, but, they live in fear everyday of dying at the hands of correctional officers due to systemic racism, violent practices, or just blatant disregard for another human being, as exemplified by the cases of the late Ashley Smith, Soleiman Faqiri, and Jonathan Henoche and the many others.

One year later, the pandemic makes it undeniable that no one is safe until we are all safe. What safety looks like will vary for different people, but it cannot be found in the practice of human caging. The only way to flatten the curve is to safely free them all, and ensure that their release is met with care.

To continue this work – of solidarity, mutual aid, and the amplification of prisoners’ voices – and to mark the one-year anniversary of the first case of COVID contracted by a prisoner, the Toronto Prisoners’ Rights Project, the Criminalization and Punishment Education Project, and other allied members of the Abolition Coalition will be holding a national day of action. The day of action will take place on March 20, 2021, and details for how to support and participate will be forthcoming on our respective socials.

If you have not already, please sign and share the open letter to demand that the Ontario government take effective action to contain COVID, not people.