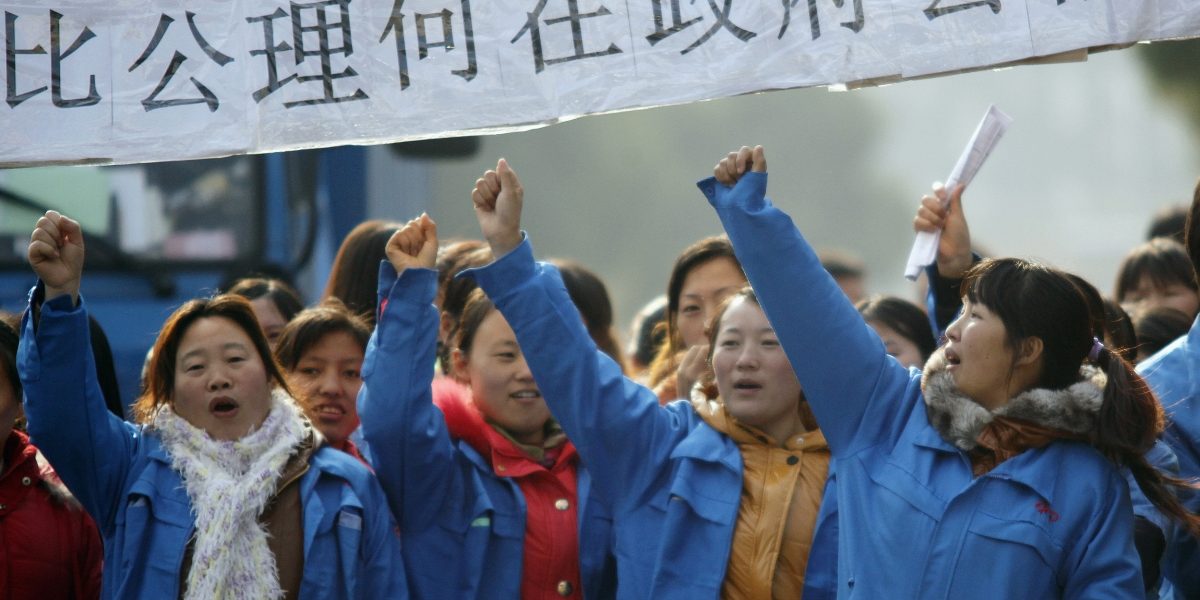 Published in 2016, China on Strike is a collection of stories based on interviews with migrant workers in the Guangdong Province’s Pearl River Delta. These are workers who have left the countryside to work in the city. These workers make up the majority of the workforce in many industries like manufacturing, construction, and the lowest paid service jobs. Hao Ren, who edited the project, collected the interviews as a worker for an NGO and then later as a factory worker herself.

With other Marxist-oriented students and workers, she worked to help get fellow workers talking to each other and connecting the struggles in their workplace to those in other workplaces. The goal of these interviews was to create a collection with practical knowledge of strikes, what works and what doesn’t, and disseminating it in the industrial zones through this network of people embedded in factories. A collective, volunteer effort to generalize these lessons, this book is meant as a collective agitator and organizer and potential inspiration for workers in China and globally.

China on Strike documents cases of workers’ struggles against lockouts and factory closures, struggles against wage reductions and the struggle for higher wages. As the preface notes, “the accounts in this volume therefore serve as a sort of instruction manual for other workers considering direct action as a means to counter capital’s rule.”

The book operates under the understanding that China is a capitalist country. This may seem obvious considering the Chinese Communist Party is led by billionaires and the top 1% of households holds one-third of a total assets, while the bottom 25% of society holds only 1% of total wealth. Though it bears stating, considering all the right-wing scare-mongering around the threat of Chinese Communism. Hence, China on Strike is a book about workers struggling against capital and government systems which help to facilitate capital accumulation.

The agricultural market reforms of the 80s and 90s forced many peasants off their land and to migrate to cities. There they found conditions of work that were quite harsh; frequent injuries, occupational diseases and serious workplace accidents. “Constrained by economic development and the state apparatus’ hope to control workers as much as possible,” migrant workers face a lot of restrictions. Much like in Canada, migrant workers in China have to deal with the Temporary Residence Permit Regulation system, which makes them vulnerable to extortion, fines, detention, forced labour, repatriation and other forms of insecurity based on their status. Because of this situation, early examples of worker resistance often took the form of individualized conflict, workers stabbing managers who mistreated them or getting family members to help beat up supervisors who insulted them or withheld wages.

As China’s economy grew with its entry into the World Trade Organization in the early 2000s, migrant workers experienced more stability and the high demand for labour gave workers more confidence, power and class consciousness. Resistance grew and so did the wages. The book gives a short history of the changing conditions for workers over the next 15 years, as workers learned from their strike experiences, won gains and faced repression too; from the pre-2008 spontaneous and violent outbursts of worker anger and attempts to get societal attention to the 2008 implementation of Labor Contract Laws that responded to the worker resistance by making pay better, while making illegal some of the most effective methods of protest (such as roadblocks and collective petitions). The 2007-2008 economic crisis brought with it nearly daily strikes, usually over defensive fights over economic needs.

After 2009, industrial production started to recover and in early 2010 the central government implemented a $585 billion USD stimulus package devoted mainly to infrastructure projects. This climate meant workers had higher expectations and when higher wages didn’t come, the result was a rising tide of strikes. Large strikes in the automobile industry spread to other industrial parks with a few key characteristics for the post-2010 period:1) workers were on the offensive, demanding higher wages, 2) workers were united, demanding restructuring of their trade union at Honda and helping strikers at other plants, 3) the official unions mostly opposed the strikes, including trade union representatives beating workers at Honda.

The interviews in the book focus on this 2009 to 2016 period, a period the authors describe as demonstrating greater worker confidence based on the increase in struggles and accumulated experiences, as well as communication through social media allowing for increasingly flexible forms of resistance.

Part One features interviews with men and women who fought back against factory closures. This section identifies some of the special features of these type of defensive battles, including signs of an impending closure and how to get the attention of your local government to intervene or support workers with lost payments. Workers describe faking suicide attempts collectively, blocking roads and marching to their labour bureau to demand action. Workers would guard the factory to make sure no machinery was taken out until their demands were heard.

Part Two focuses on interviews with 10 workers and their battles over cuts to their wages, benefits and allowances. Here we learn about the tactics of management who would try to target leaders and activists to try and isolate and weaken the strike. The strikes often lacked preparation and demands were formulated on the fly. This often made it easy for management to disorganize workers and sew confusion. One worker drew the lesson that, “when we go on strike, whether we negotiate or not is not the most important thing! It’s most essential to stick to a fixed wage demand and believe that our collective strength can defeat them.”

Having fixed demands and backup worker representatives to combat isolation allowed strikes to be successful. As one participant noted, at the start of the strike it may “bustle with excitement like a festival celebration, but if the bosses or related government offices have the means to delay the matter or exert constantly increasing pressure, the group of workes will most likely be dispersed. In addition, since the aim is unclear, strength cannot aggregate and [the strike] ends in confusion, depression, and exhaustion. In fact, only by taking one action after the other (for example, road blockade, demonstration, collective petition) can these problems be temporarily avoided.”

In battles over subsidies for working in high heat, loss of housing allowances and sub-par lunches in the residences, we get a glimpse into some of the tactics developed through struggle and experience. For example, during roadblocks and other confrontations with police, “the male strike leaders were consciously pushed to the core of the back of the crowd, while female workers stood in the periphery or in the front. Many female workers who used to be docile and obedient on the job became very brave and militant; they stood in the front to protect the male strikers….This strategy emerged from recurrent strikes in Shenzhen during that time. Workers were aware that male workers were more likely to be arrested if they confronted the police, while female workers were relatively safe given that police would not dare touch them.”

Often the experience of collective action taught the workers that striking could bring real benefits to improve their living conditions, and showed the power that comes with solidarity between different sections of a plant or other factories nearby. Strikes could spread to other departments and factories simply by setting the example that it could be done, and bargaining positions were strengthened when strikes took place during a period of peak production.

Part Three focuses on strikes for wage increases. Here the effects of the March 2010 strikes in the Huadu Car Industrial Park in Guangzhou loom large. A concentrated surge of strikes for wage increases was followed by a similar surge in Japanese-owned factories in the city of Foshan. Toshiba and Panasonic increased wages to avoid losses from the strikes. A strike at Nanhai Honda in May 2010 and the implementation of the Minimum Wage Standards Act also played an important role in workers struggles. The Act forced employers to comply by raising minimum wages, but to compensate they cut benefits. The result has been an increased willingness to resist from workers as they learn more about the labour laws. “The increasingly widespread knowledge of labor law with increasing reports of labor disputes have significantly raised workers consciousness.”

This section is important to note and seems applicable to workers resistance everywhere. The workers strikes put pressure on the government to increase work standards and helped raise workers militancy as well. This reciprocal relationship in which the political and economic battles reinforce each other should be noted as we think about how to increase militancy and worker victories here. The narratives in this book are highly relatable and record the fascinating specifics of the Chinese working class in a way that translates to worker activism elsewhere.

As the preface to the English editions notes, “it is hardly debatable that China represents the future of global capitalism, but the stories collected in this volume suggest that it is also the future of the labor movement.” The stories in this collection suggest that 1) “labour resistance in China has grown as explosively as the country’s GDP”, 2) “despite the overwhelmingly long odds, direct confrontation at the point of production is more effective than nearly any other channel available to Chinese workers” and 3) “collective action is politically and socially the only sound basis for the development of a labor movement in China.”

The small slice of experiences recorded in China on Strike give us an important glimpse into the conditions of exploitation and resistance in the largest working class in the world, a topic seldom covered in any meaningful way in the media. China on Strike does the important work of summarizing, analyzing, refining and disseminating these experiences “in order to support workers’ learning process and progression from spontaneous resistance to conscious struggles as soon as possible.”