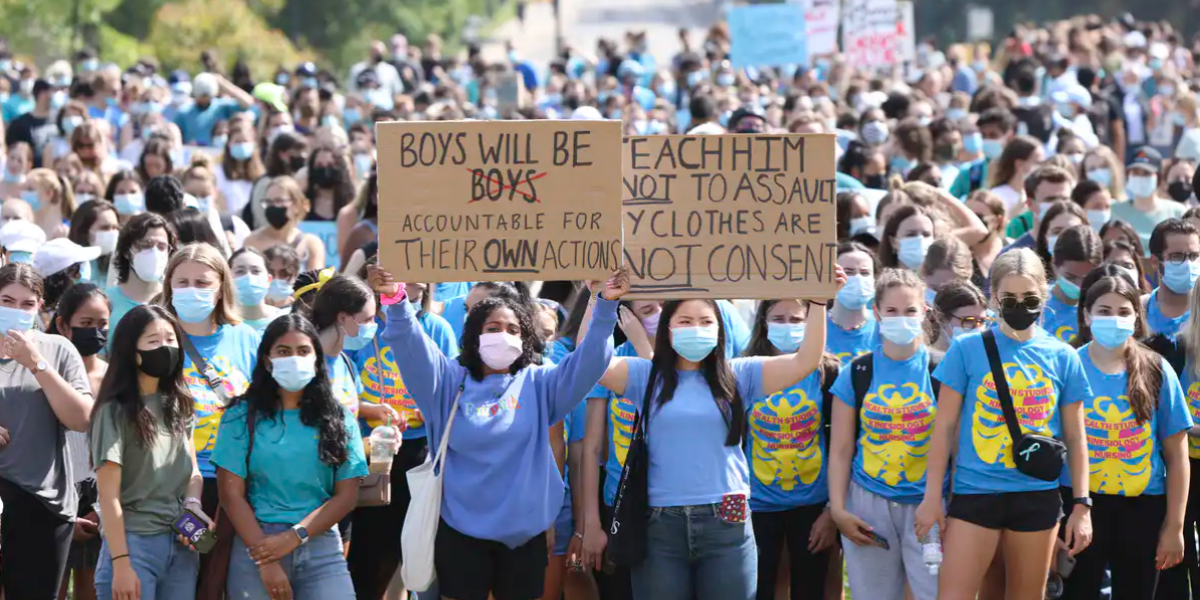 On September 17 over 9000 students at Western University protested against a wider culture of rape and misogyny on campus. These protests were a direct response to allegations that thirty or more students were drugged and/or assaulted during this year’s orientation week.

Students at Western University expressed outrage with rape culture on campus, demanding accountability from both individual perpetrators and the university at large. Unfortunately, these experiences of sexual violence on campus aren’t uncommon. In 2019, 71% of students experienced or witnessed gendered and sexual violence during thier university experience. Despite this, campus rape culture and casual bigotry still continue, with minimal or ineffective response from university administration.

A day prior to the protests Western University launched an action plan around sexual violence on campus, announcing changes such as an increased security patrol on campus at night, and additional hiring of special constables alongside security guards. However, more policing on campus will not eradicate the culture of rape and misogyny that undergird campus life. Increased policing is more likely to exacerbate gendered and sexual violence than curb it. Carceral feminism as an approach to sexual violence often fails to protect the most marginalized in a community, re-inforcing white supremacy under a thin veil of neoliberal feminism.

The adoption of carceral approaches to sexual violence prevention is a common approach from university administration. However, the evidence suggests that increased policing on campus is antithetical to student safety on campus. At Wilfrid Laurier University, another Ontario university, it was found that students felt that the Special Constable Service (SCS) mandate “held no regard for student safety on campus,” but rather opted to surveil and criminalize students on campus, particularly impacting Black, Indigenous, and students of colour.

Overall, many students belonging to equity-deserving groups — particularly 2SLGBTQ+, Black, and Indigenous students — named incidents of direct discrimination from the SCS. Additionally, self-identified female students found that the SCS did not contribute to or create a safer campus environment, with a few students reporting experiences of sexual harassment perpetrated by special constables.

For feminists dedicated to abolition, this does not come as a surprise. The police are not, and can never be, an institution dedicated to feminism. The prison industrial complex soley exists in order to maintain ruling-class power through the oppressive systems of misogyny, colonialism, racism, cisheterosexism, and sexual violence.

Transformative justice and accountability on campus

Despite the overwhelming evidence of the failures of campus policing, universities fail to dismantle SCS on campus. The university, as a benefactor of white supremacy, rather continues to further marginalize students that they claim to keep safe.

Students and survivors on campus deserve better, but often people feel hopeless in finding effective solutions to address gendered violence on campus. Transformative justice is an de-carceral framework that calls for creative responses to sexual violence, abuse, and harm that don’t rely on institutions of state-sanctioned violence and control. Transformative justice allows for survivors to ask themselves what justice may look like for them — shifting the narrative away from persecuting the harm-doer to centering care and accountability.

For many survivors, the police are not an option. This is overwhelmingly evident on campuses as only 20% of sexual violence survivors report to the police — many describing the experience of reporting as harmful and ineffective for trauma-survivors. Transformative justice responds to these barriers, acknowledging the role of the prison industrial complex in re-creating cycles of harm.